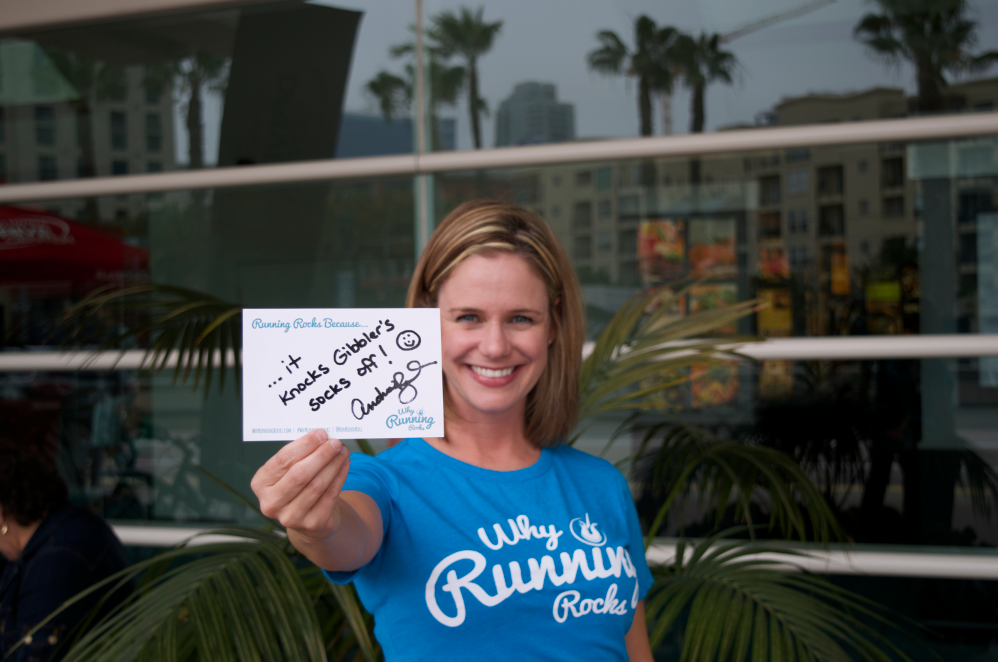 Andrea Barber was one of many runners who participated in the #whyrunningrocks National Running Day campaign.

The Tanners couldn’t get rid of famously ditzy Kimmy Gibbler. Andrea Barber, the actress and runner who plays Kimmy, will be making her way back into your living room with Netflix’s new Fuller House, a spin-off of the 90s hit Full House, set to air spring 2016. John Stamos, who played Jesse Katsopolis on the original show, broke the news to Jimmy Kimmel earlier this year. Andrea, who currently lives in Los Angeles, recently completed the Suja Rock ‘n’ Roll San Diego Half Marathon on May 31. The race series staff caught up with the runner and talked about what the highly anticipated “fuller house” will look like and why running rocks for the avid Rock ‘n’ Roller.

With 26 half marathons and 3 full marathons under her belt, it’s no surprise that Andrea’s favorite activity results in stinky socks. As Michelle Tanner would say when Kimmy slowly removed her own sock, “Not the sock! Run for it!” While she has stayed close with her Full House cast, Andrea has also been busy flying across the country to participate in running events with her We Run Social family, “a crew with the sole purpose of running all the miles and winning life on the interwebs.” Last year, Andrea was one of the few crazy runners that challenged herself to running two half marathons in the same day: The Avengers Half Marathon in Anaheim, and the Rock ‘n’ Roll Las Vegas Half Marathon on The Strip at night, equaling a full marathon.

Fun fact: Andrea says that whenever she arrives somewhere to run a race, she’ll text a friend and say, “I’m here for the weekend!” to play off one of her favorite lines from the show.

Why running rocks: “It knocks Gibbler’s socks off.”

Favorite race: “I love the Vegas race—the energy there is unparalleled. It’s my favorite.”

Related: A Popular Runner-Actress Who Appeared On Women’s Running

While running is an important aspect of her life, Andrea is excited to be filming episodes of Fuller House with her “first” family. The show will be centered around D.J. Tanner-Fuller (Candace Cameron-Bure), Stephanie Tanner (Jodie Sweetin), and Kimmy. Similar to Danny Tanner recruiting his best friends to raise three girls in Full House, D.J. is a widowed single mom raising three boys and needs help. Since Andrea, Candace and Jodie are friends in real life, “There will be great female energy, it’s about relationships between sisters and best friends,” she says. The first episode will be a big reunion, and she’s hoping everyone will be on board. Other cast members will slowly be signing on doing cameos based on their availability throughout the season. You’ll have wait until next year to see if Kimmy’s feet still stink—hopefully she’s remedied that foot problem in the last 20 years!

Fun fact: Andrea revealed that Kimmy will also play mom to feisty teenager, Ramona (Perhaps this is payback?), who will be living under the same roof.

Fun Races To Watch And Run This Fall