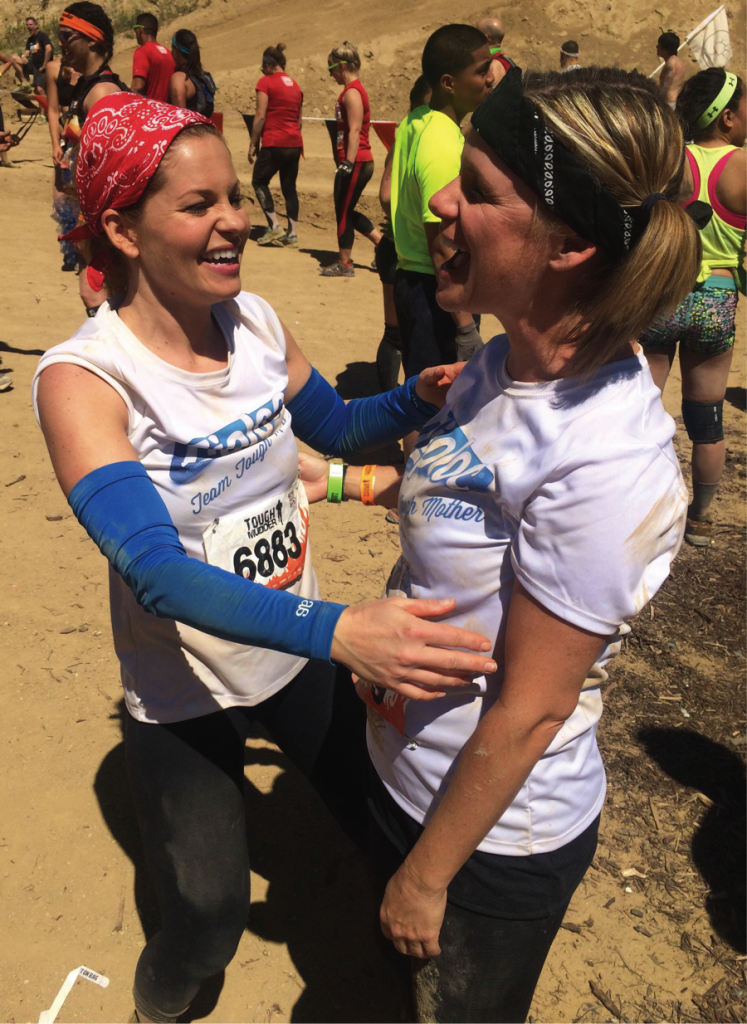 It’s been two decades since we’ve seen the dynamic duo of D.J. Tanner and Kimmy Gibbler on “Full House,” (TGIF, anyone?). Luckily, Netflix decided to fill the hole in our hearts by reimagining the original—turning it into “Fuller House,” which premiered in late February. But the new show doesn’t deserve the credit for bringing Andrea Barber (Kimmy) and Candace Cameron Bure (D.J.) back together—running does.

Barber recalls her first race about four years ago at Disney’s Tinker Bell Half Marathon, which she ran with a few friends. “It was meant to be a fun run, it wasn’t meant to be serious at all. But something happened out there around the middle of the race…I felt that runner’s high. I crossed the finish line and I was changed forever. What started out as a fun run ended up changing my life completely.” So began Barber’s love for running.

Meanwhile, Bure, inspired by Barber’s half marathon feat, decided she’d give running a shot. “I saw that Andrea had started running half marathons and I was so surprised and proud of her—she piqued my interest.”

Barber asked Bure to join her for a 10K obstacle race, which was perfect for Bure, because it broke up the monotony she felt when running solo. While the longest run she has completed is 10 miles, she has her eyes set on accompanying Barber for a half marathon one day.

As the two return to “Fuller House,” their bond remains strong. “We’re closer now than we were as kids just because of time and maturing…and having the perspective of an adult,” says Barber. “We realize that we share this bond from growing up on TV and a sound stage. It was a very unique childhood.”

Thanks to life on set, neither of the women had the chance to experience normal schooling, let alone physical education or high school sports. Barber recalls the time she tried out for the lacrosse team in college. When instructed to run 2 miles for the “warm-up” she immediately regretted the decision and quit because she “absolutely hated it.” Bure started working out when she was 16 for health reasons, but it was not until her late 20s that she began to enjoy the endorphin rush of fitness.

Although they don’t train together, the two make a great racing duo  and have done several mud and obstacle races as a team. While Barber has become the long-distance marathon-crushing type, Bure prefers nontraditional races and weight training. Between juggling filming and family, both actresses have incredibly busy schedules (Bure flies from L.A. to New York every week!), but they still make time for a daily sweat session.

The once TV children now also have kids of their own, which keeps them even more active. Barber explains, “They’ve changed my outlook about being healthy and setting a good example…because ‘monkey see, monkey do.’ I want to make sure they see me modeling good habits, good eating and physical habits.” And Bure is in the same boat with her husband (a professional hockey player). “Fitness is incredibly prominent and important in our lives,” she says, explaining that ever since her children were young they’ve made time for regular family runs on the beach or at the park.

Barber and Bure have come a long way from their early days of “Full House,” but they both still embody their playful and fun-loving characters. As D.J.’s younger self would say, “Oh Mylanta!” They’ve certainly grown into the best of run buds.

Racing My First Half Marathon—With The Flu