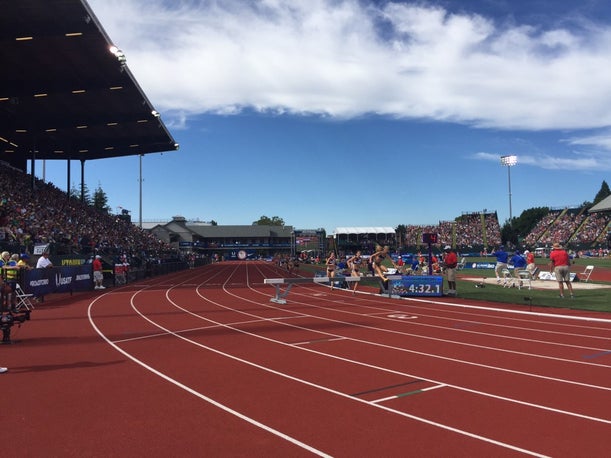 Read our breakdown here. It was a great day and a sad one too.

Is there a better place to celebrate Independence Day than the U.S. Olympic Trials?

Probably not! Athletes are pursuing a spot on Team USA for the greatest competition on the track that only comes every four years—what can be better than that? There was extra red, white and blue spirit in the stands; just take a look at athletes’ Instagram pages! They were all celebrating their country, their pursuit of the Olympic team and their desire to represent the United States by being on of the top in world.

What events went down on the track today?

The women’s steeplechase has been highly anticipated by many. There were three heats of the first rounds, with the likes of Emma Coburn, Shalaya Kipp, Becky Wade and Colleen Quigley all competing for a spot in the semi-finals. (Not-so-fun-fact: the women’s steeplechase event has only been available since 2008 at the Olympics.) The other event was the women and men’s 800-meter final. In case you’ve forgotten, that’s Alysia Montano’s event, and she was a crowd favorite per usual. And then there’s Kate Grace…and then there’s Phoebe Wright…and then there’s Brenda Martinez…such a stacked field and equally positive and negative outcome.

But wait—what exactly is the steeplechase?

The steeplechase is a 3,000-meter event, where competitors hop over steeples (or basically giant hurdles) spread out around the track. The actual history of the event comes from when runners would race from one town’s steeple to the next, jumping obstacles such as streams and low walls. In this event, one of the steeples is following by a pit of water that runners splash through.

So how did the races turn out?

Emma Coburn easily won her heat and advances to the semi-finals as the top seed. The three Oiselle athletes that chased her—Megan Rolland, Shalaya Kipp (who often trains with Coburn) and Mel Lawrence all advanced as well. Should be an exciting semi-final later this week!

To say that heat one of the men’s 5,000 meters came down to a sprint is pretty accurate. The final lap of this heat was 53.72! Just a reminder that the 5,000 meters is 12 and a half laps about the track. So that’s fast. The crowd roared for heat two, where Galen Rupp (who won the 10,000 meters earlier this week and placed second at the Olympic Trials Marathon earlier this year) and Bernard Lagat received thunderous screams during announcements. Bernard Lagat ran away with the win, the final lap even faster than that of heat one. Rupp finished sixth.

So what’s in store for tomorrow?