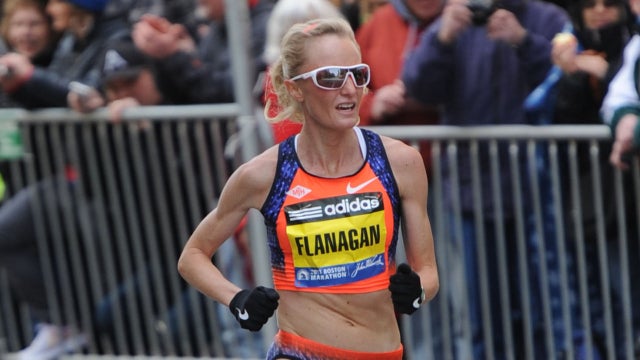 On Sunday, CBS’ 60 Minutes shared the story of Shalane Flanaga’s quest to become the first American winner of the Boston Marathon in 30 years. A native of Marblehead, Massachusetts, Flanagan is not just the American favorite, but a local hero as well. The segment touched upon Flanagan’s training for the race and her motivation for returning to the Boston Marathon again after last year’s bombings.

“Maybe it’s just a Bostonian thing, but I was really, just genuinely pissed off that someone would ruin such a celebratory day and a historical moment, Flanagan stated. “It was a personal attack on my city.”

Last year, Flanagan finished 4th in 2:27:08, 43 seconds behind the winner, Rita Jeptoo. Jeptoo is also returning to the Boston Marathon to defend her title. But Flangan is undeterred in her goal. She says all of her training has been centered around one goal: to win the race.

“It’s my ultimate dream and goal to win the Boston Marathon,” Flanagan said. When interviewer Anderson Cooper asked her whether winning Boston was better than an Olympic medal, Flanagan chose Boston.

You can watch the entire segment below. Be sure to watch as Anderson Cooper tries to run 400 meters at Flangan’s marathon pace. Additional segments about Flanagan’s love for Patriot’s Day and her training can also be found on 60 Minutes’ website.