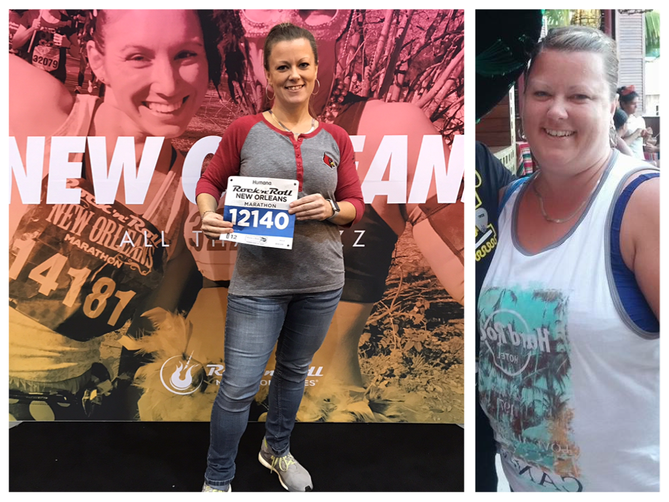 The vacation pictures served as the final motivational straw for Heather Lowry to turn her life around. After earning a master’s degree in July 2014, Lowry was treated to a Cancun holiday by her mother—and the photos didn’t lie. At 5’2″, she weighed 237 pounds.

“Seeing those pictures after I graduated,” said Lowry, 38, who lives in Louisville, Ky., “I realized how big I was.”

Her weight problems began when she was about 17, working at a fast-food eatery. By 21, she had her first child. By 23, she had her second. “For a while, you use that as an excuse,” Lowry said. “‘Oh, I had a baby.'” After a divorce in 2008, the stress of being a single mother proved to be too much. “After (the divorce), I became an emotional eater,” Lowry said.

There were alarm sirens, clamoring for Lowry to make changes. Her father died of a heart attack six years ago at 55. At the funeral, Lowry met a half sister who was only a couple years older than her. The woman had already suffered two heart attacks then—and weeks ago suffered a third.

Lowry, who is a social worker, was on cholesterol medication and diagnosed as pre-diabetic. Walking to her car from the office was exhausting. Her ankles painfully swelled on flights.

Upon seeing the disappointing vacation photos, she literally hitting the ground running, losing 93 pounds and moving from a size 18 to a size 6! And like thousands of others, she stepped into the Big Easy to tackle the Humana Rock ‘n’ Roll New Orleans Marathon this weekend, finishing in 6 hours, 15 minutes, 56 seconds. The race is a homecoming for Lowry, who lived in New Orleans when she was younger, for more than 30 years ago.

After stepping off the plane Friday morning and heading to Bourbon Street, the memories flooded home. Lowry’s mother and stepfather married in New Orleans. She came along for the party, where she remembers standing on a Bourbon Street balcony as a child, tossing beads on the street during Mardi Gras. On Friday ahead of the big race into City Park, she enjoyed oysters for lunch and reveled in listening to a street musician blast the saxophone. “It’s almost like a circle of life,” she said.

She had tried jogging when she was obese, making it to a nearby park, then, “Respiratory wise, I thought I was going to die.” The shin splints felt like someone stabbing her in the legs.

But after looking at those summer 2014 vacation pictures, “I gave myself the greatest gift. I had weight-loss surgery,” she said.
Lowry underwent a gastric sleeve, a procedure where the stomach is drastically shrunk. She lost 17 pounds from the surgery. Four months later, in January 2015, Lowry began dating someone who ran road races.

In April 2015, after cheering him on at events, Lowry and her boyfriend stopped on the way home after one of his races and bought her a $100 pair of running shoes. A week later she signed up for a 5K. She knocked off the first 5K in May, another in June, stepped up to a 10K in October, by which time she had lost 93 pounds.

In October 2015, she ran her first half marathon, and the race in NOLA was her first 26.2-miler. Her half marathon personal best is 2 hours, 28 minutes.

“I say that running is cheaper than therapy,” said Lowry. “I’m able to go out the door for an hour and be OK. I take my pain to the pavement. It is nice to have an outlet that has such a positive outcome.”

“I know where our country is, we’re not healthy,” she added. “Maybe I can inspire people, let them know they can get their health back.”