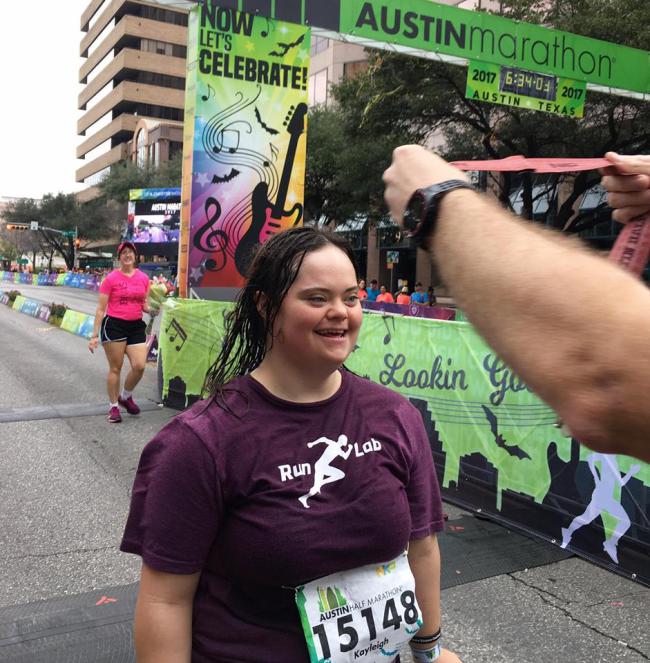 Kayleigh Williamson loves to run. And play basketball. And swim. She even loves Krav Maga, a form of self defense created for the Israeli Defense Forces that incorporates moves from sports like judo, boxing, and wrestling. She and her mom, Sandy, do it together. At 27 years old, she is one active lady.

Just a few weeks ago, Kayleigh ran the Austin Half Marathon in Texas. It was her first half marathon and the first time anyone with Down syndrome had competed in it. She crossed that finish line in 6:22:57 and did a little dance while she was at it.

“At the finish line, I felt happier and stronger,” said Kayleigh, who ran listening to her favorite tunes. “I did my little diva victory dance to Britney Spears.”

Her mom was with her all the way. In fact, while Sandy ran the half marathon on her own, she kept running back to check on Kayleigh. In the end, Sandy actually ran about 23 miles.

“If I’d only gone a few more, I could have run a full marathon!” Sandy joked.

It’s not unusual for mothers to make sure their children are doing well. But raising Kayleigh as a single mom, Sandy’s need to protect was even stronger. Watching her daughter finish the race just pulled her heartstrings.

“I am so proud of her,” she said, a little choked up. “People were cheering her on. It was the most emotional experience to see her determination—it’s mind blowing. I knew then I didn’t need to protect her. She could protect herself.”

Sandy explained that running in the half marathon was a great experience in a lot of ways. The running community is so accepting and open. She and Kayleigh both realized that you shouldn’t let others limit what you can and cannot do. It’s important to tune out any negativity. It also gave them a clear view of what Kayleigh needed to work on for the next time. And yes, there will be a next time. She’s gearing up for the Statesman Cap10K in Austin in April.

Kayleigh knows she needs to focus on speed now. But that’s after working with a personal trainer, Gabriel Lucio at Gold’s Gym, and biomechanics rehabilitator, Dr. Kim Davis of RunLab in Austin. Because Down syndrome can often make people more hypermobile—meaning their joints and collagen fibers are softer and more flexible—that translates into stability issues.

“Her biggest challenge is mobility,” said Davis. “When you’re running, you need to be stable because you’re always going to be on one leg.”

To make matters worse, Kayleigh had sprained her ankle in the 10-mile Run for the Water race in November. To finish, she just kept running on it. Davis worked with Kayleigh on her strength training and biomechanics to offset her weak ankle issue.

“Based on her mechanics, she’s never going to run like a Kenyan,” she said. “You’ve got to look at the individual and say, ‘What are her strengths?’ You’ve got to try to help the areas that are strong and offload the ones that are weak.”

Kayleigh has had her setbacks physically. Aside from Down syndrome, she was diagnosed with Graves’ disease, an autoimmune condition that affects the thyroid. She was also pre-diabetic and had her spleen removed last May, which weakens the immune system, too. With running and a little help from Weight Watchers, her Graves’ is in remission and she’s never felt better.

Despite all of those health problems, Coach Lucio said she started out with a pretty lofty goal. Ideally, you want to start small—maybe a 5K and work up to an 8-miler. He started working with her about a year ago when she was gearing up for the 10-miler that sprained her ankle last fall.

“We’ve got a lot of hills in this part of Texas, so it can be hard,” he said. “I started working with her on the treadmill, strengthening her quads and core, and just making sure she had the aerobic capacity and stamina.” 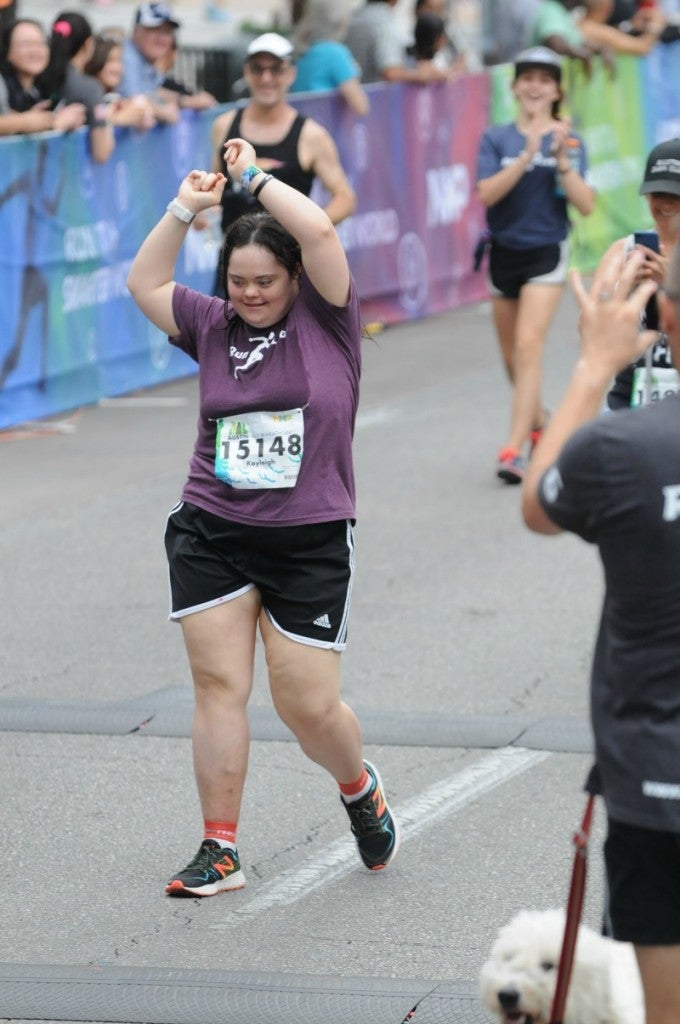 Both Davis and Lucio made it clear that, while Down syndrome poses its difficulties, Kayleigh is one tough cookie—dedicated and headstrong. She works hard, but always with a positive attitude. Lucio said she is probably one of the easiest clients he has ever had.

“The hardest muscle to change as a trainer is your mind,” said Lucio. “It’s the motivation and the mindset. In her heart, she really wanted to do this race. I had no doubt in my mind she was going to finish.”

Kayleigh will continue to work with Davis and Lucio and will even be part of Davis’ race team with RunLab. She also plans to run in the Diva’s Half Marathon & 5K in Galveston, the Austin Distance Challenge with the Austin Runners Club, and compete again in the Run for the Water and the Austin Half Marathon.

There’s just no stopping her, now.