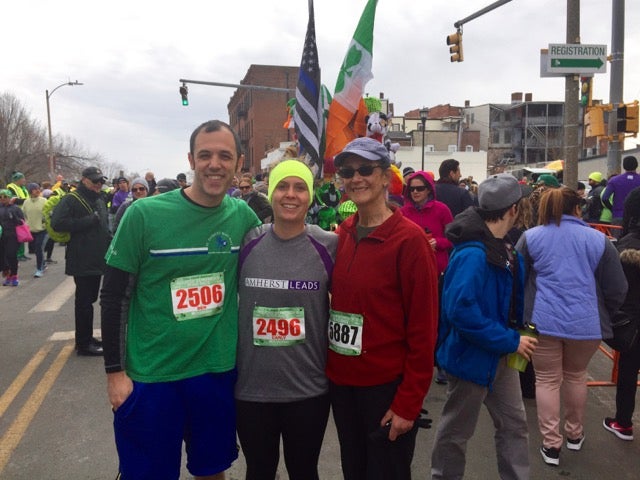 When downplaying expectations for a race, runners often say, “As long as I don’t finish last.”

Somebody has to do it, and on March 18 at the Saint Patrick’s Day 10K in Holyoke, Mass., that person was me. I even finished a few minutes behind the official last-place finisher, a 63-year-old man who came in 4813rd place at a time of 1:51:15.

In my many previous runs of the festive, hilly 10K, I had picked up the pace on the stretch to the finish line, less than a quarter of a mile. But this year I staggered with help from a race official who offered his arm. My two sons and one girlfriend, waiting on the thinning sidelines, ran over. We linked arms, trotted to the finish line and hopped over in unison.

I was embarrassed and proud.

Proud because I could still do the race that had served as a cancer sensor; I ran it so slowly in 2003 that I suspected a problem. If not for the race, I might not have gotten my leukemia diagnosis.

Proud because I’ve managed to come back and do the race on and off throughout four stem cell transplants (also called a bone marrow transplant) up until 2009, as well as many side effects.

But I felt embarrassment because, let’s face it, the last-place finisher is something of a spectacle. And because, although never super fast, I was never super slow. My best finish of 54 minutes kept me safely in “the front of the last two-thirds of the race.”

This time I was all alone.

My time wasn’t clocked, so I have to guess I finished close to 2 hours. That’s about an hour slower than when I had leukemia, with years of accumulated complications like peripheral neuropathy making me less steady than before.

Before a comeback race in 2012, I wrote in a blog post that I was concerned about my speed. My doctor had said, “You’ll probably be the fastest bone marrow transplant patient out there.” I didn’t make any records but I was relieved to not be last. Toe pain has stopped me from running the race for the past few years. Aside from running around on the tennis court, I hadn’t trained much this year—mostly 3-milers with a couple of 5-milers—but I signed up after a friend asked me to do it with her. And I couldn’t resist tackling “my race” again.

I did okay for the first 3 or 4 miles, but then my knee and back started to hurt. I lowered my head and leaned into the hills. The pack thinned out, then for the last mile I was alone. The “tail vehicle” crept along beside me, an eyeball surveying me from the passenger seat. Stopping or walking didn’t occur to me, just like when I had leukemia. I thought I didn’t deserve the T-shirt without finishing.

The race director said 6,200 registered, including 500 walkers. So even subtracting walkers and those who never picked up their numbers, I still finished ahead of a good number who dropped out.

“I don’t think anyone should be embarrassed,” he told me afterward. “You did it and you finished.”

A friend who finished last in a different race had a more philosophical way of comforting me. “I finished ahead of all the others who didn’t run,” he said.

I searched for more support by Googling: coming in last in a race.

I found this story where Women’s Running wrote about last-place finishers from the perspective of a crew member of a nationwide race series.

“After many events and hundreds of miles, my only regret is never telling the final finishers how their journeys inspire me. Sure, the fast runners are impressive, but the back-of-the-pack runners have tenacity that’s more important than speedy times,” she wrote. In a similar spirit, more than 5,200 runners in the Facebook group “Back of the Pack” subscribe to this philosophy: “We think the runners who finish toward the back have a spirit like no other, and we never think of ourselves as lesser of a runner.”

I’m all in with that.