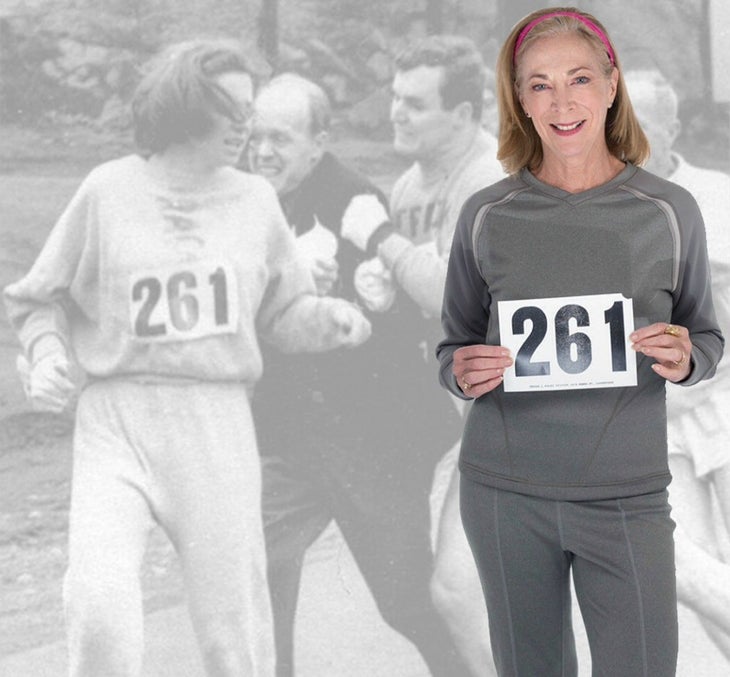 Kathrine Switzer is the marathon legend who wore that number in 1967 as the first woman to run the Boston Marathon, despite an official’s efforts to pull her off the course. Now she repeats the words in quotes above, the words of many women today who wear their appointed race bibs as well as a second bib on their backs with her number.

“This isn’t something I did,” she says. “This is something that came over the transom.”

However unintentional it was, Switzer, 68, has become a hero. And in the past year, she’s taken further steps to solidify her place in the present—not simply in history. She describes her overall mission: “empowerment of the female runner.”

Switzer came to San Diego this week to speak at the Girls on the Run 2015 Summit. The nonprofit pair girls with volunteers to train for a 5K. After her keynote speech, Switzer was abuzz with energy. She makes a handful of speeches a year, but usually it’s for a business like Morgan Stanley. This speech was different because her audience—more than 400 women from around the country—has a shared mission of empowerment.”

Switzer says she was surprised when she first started hearing about women wearing 261 in races and seeing photos on the web. She says she thought, “It’s wonderful and kinda creepy. It’s the Internet.”

Then she started seeing tattoos!

That’s when she realized how strongly women can relate to her story. (For the record, she doesn’t have a 261 tattoo, but she’d like to get one.) For about a year, she’s been channeling her passion to help women run in three main ways through what she calls the 261 Fearless Movement:

1. 261 Women’s Marathon and 10K in Mallorca, Spain:
March 8, 2015, will be year two for this race, which takes place on International Women’s Day—not a coincidence.

2. Fearless 261 line of clothing by Skirt Sports:
Switzer describes a meeting with some Muslim women in Malaysia who must run with their bodies covered and had been sweltering in compression gear. When they saw skirts and leggings and long-sleeved tops that were designed for comfort, they were ecstatic. (After her Girls on the Run presentation, she threw on these to hang out at her hotel.)

3. Developing global ambassadors and clubs:
Much in the way Girl on the Run helps girls get into the sport, Switzer sees her efforts helping women 18 and older.

Switzer splits her time between New York and New Zealand, where her husband, the runner and writer Roger Robinson, is from, so it’s relatively easy for her to travel the world. She has a specific interest in helping women in North Africa and the Middle East, and she has been assembling a team to work with her—one person in Austria, anther in Boulder, Colo.—so her efforts can extend all over the globe.

“We can do whatever we want,” Switzer says fearlessly.

What Makes Her Tick

To end our interview, Switzer indulged us with a little more insight into the marathoner’s life:

When was your last run?
Yesterday around the waterfront in San Diego. With my sore Achilles, my long run is 50 minutes, so that’s what I went.

What was your first sports bra?
I designed it with Lily of France. (Before that she hadn’t worn a sports bra, but she helped the company to come up with a non-chafing, comfortable design. With the $5,000 she received, she bought a Mazda sports car.)

What did you eat for dinner last night?
I had a Tuscan pizza in my room—it had arugula and sun-dried tomatoes—and a glass of skim milk.

Do you drink milk a lot?
Yes. It’s my secret weapon. (She’s had two running injuries—the current sore Achilles after stepping in a hole and a back injury after a long plane ride—and she started running at 12, so she credits milk for her strong bones and constitution.)

What’s one thing people wouldn’t know about you?
I really love sitting in bed in the morning with a cup of tea. (Her husband indulges this habit, as Switzer has reached a point that she no longer does early morning runs and prefers to stick to daylight hours.)