If you’ve run a race in the past year, you’re sure to have seen a pair of Vibram Five Finger shoes on a fellow athlete. The barefoot running movement has become prevalent in many running communities and is gaining notoriety from firm believers in the benefits of minimalist running (more to come on this in future posts…). 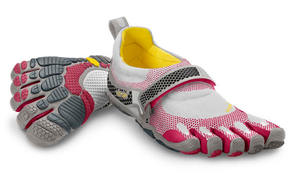 What you may not have seen is a pair of Vibram Five Fingers worn with a red-carpet worthy evening gown. According to The Washington Post Style Blog, actress Shailene Woodley attended the Golden Globe Awards Ceremony dressed in her elegant Calvin Klein gown with appropriately formal pumps.

When attending the Warner Bros. and InStyle after-party, Shailene traded her high heels (sometime known as torture devices for women!) for a black pair of Vibram Five Fingers. Her courageous wardrobe change quickly prompted criticism from the fashion world and applause from running enthusiasts all around.

If we would have seen Shailene in person, we would have given her a high five and said, “You Go Girl!” We commend Shailene for kicking her heels off (literally!) and putting comfort first!  Who said fashion and function can’t mix?

Would you ever sport a pair of Vibrams with your formal wear, in the name of comfort?