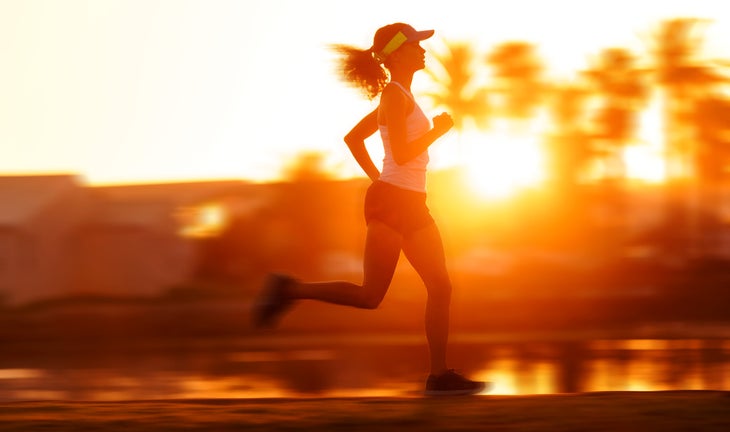 Katie Higgins, author of the blog Chocolate Covered Katie, shares why she likes to run—almost as much as she loves chocolate.

I first fell in love with running while attending college in Pennsylvania. I could think about everything as I accelerated down the quiet tree-lined streets: friends, boys, classes, the future…or sometimes nothing at all. Running provided me a new outlet for all the energy I’d once expended on after-school sports, and it was a great way for a college student to get around without a car.

Around this same time, I had started a small blog. Initially intended only as a fun way to keep up with a few friends, the blog suddenly took off beyond anything I’d ever imagined. The next few years went by in a crazy blur as I navigated the unknown, transferred colleges and ultimately put school on pause to turn Chocolate-Covered Katie into my full-time career. In all of the craziness, running remained a comforting source of stability. Four or five mornings a week, sun or rain or snow, I knew I’d be out there running. I loved it.

Until one day I didn’t.

Over the years of adhering to my strict running schedule, I slowly began to lose motivation for the activity that had once brought such joy and excitement to my life. I would find myself dragging through the miles and arriving home completely drained. Running had never been something I wanted to make myself do, and so one day when I was “supposed” to go out, I just didn’t.

For almost a year, I didn’t miss it at all. I spent my newfound laziness burrowed under a sea of blankets on the couch watching movies, eating homemade chocolate chip cookies and scooping peanut butter from the jar like it was my job. At the time, I wasn’t sure I’d ever go back to running.

Then, one cool afternoon in March, I felt it…the desire to run.

This time around, however, there is no schedule. I run when I want and go only how far I feel like. Sometimes that translates to four times a week, while other times it’s only three times a month. Having recently moved to Washington, D.C., my routes often take me past landmarks, such as the U.S. Capitol or the White House. Or I can opt for a quieter run along the Potomac River. With such an incredible backdrop and now without any rules, I’ve rediscovered my love of running.

Dinner in Under an Hour: Genius Time-Saving Tips