When the 2016 Olympic Marathon Trials take place this Saturday, there will be more than 200 women on the starting line. Not every woman will be an elite. In fact, only a small percentage of them can claim runner as their sole profession. Instead most of the field will be made up of incredibly talented runners who balance their training with full-time jobs, families and social lives.

One of those women is Alexandra Bernardi. The New York City resident works full-time as a research analyst for a social policy research organization in Manhattan. However, before she steps foot in the office, you can usually find her running in Central Park.

“Ninety-nine percent of my runs are done in the morning before work, starting anywhere from 5:30 to 6:30am, depending on the length and my options for company,” says Bernardi. “There are so many more distractions that can come up in the evening, and I find that being able to check my workout off my to do list first thing means I have more flexibility later in the day.”

Bernardi decided to go for the trials B standard only a year ago when, despite a warm day, she had a strong performance at the LA Marathon. At the time, the Olympic Trials standard was 2 hours, 43 minutes. After running 2:45:50 at the 2015 Chicago Marathon—an 8-minute PR— she decided she would try to hit the mark at the California International Marathon just two months later. “CIM was one of the last chances to chase the trials standard, so I decided to give it a fair shot,” recalls Bernardi.

Despite running a strong 2:44:35, Bernardi was devastated to miss the cut off—until USATF changed the standard to 2:45 five days later. She was thrilled.

“In a matter of five days, I went from beating myself up about missing the original standard at CIM, to sneaking under and getting the chance to line up with an incredibly talented field of women on Feb. 13. It’s an amazing and rewarding feeling to have all your hard work and sacrifice pay off.”

During a typical training cycle, Bernardi fits in two workouts per week and a long run (that may also be a workout). Normally she would peak at 85 miles per week but her build up for the Olympics Trials has been short. Bernardi’s work schedule is consistent albeit long—typically 9 a.m. to 7 p.m.—so she knows exactly when she can fit in her training.

While she is able to log her miles, it can be difficult to find time to do all of the extras that pro runners can prioritize. “Strength work, stretching, rolling, etc. I’d like to think I would do that regularly if I wasn’t working!”

Bernardi has also been able to work around the challenges that come with balancing life and running. She is grateful to connect with other women through her team, New Balance Central Park Track Club. “[They] are not only my training partners, but great friends, which means our runs do double duty as workouts and social time.” 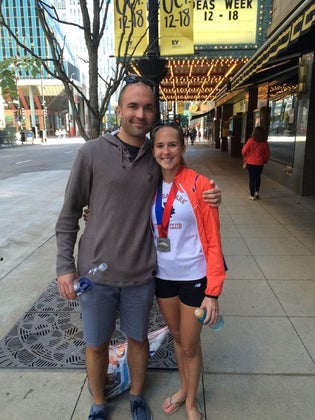 Finding time to spend with her husband, who often has an unpredictable work schedule, can be difficult. However he is always supportive of her running. “He never questions the time or energy or money I spend training and racing, and I’m so grateful he encourages me to pursue my passion.” Along with her husband, Bernardi’s parents, excited friends and enthusiastic coworkers form a encouraging support crew. She calls her parents before every race “to get one last pep talk.”

The Olympic Trials Marathon this Saturday will be her fourth time running 26.2 miles in 12 months. Unlike the pros, she won’t be vying for a top-3 finish. Her goal for the race is “to be competitive and focus on truly racing the women around me instead of being intimidated by their achievements or doubting my own abilities.”

After the hard work of qualifying for the Olympic Trials, she also wants to enjoy the entire experience. “I may never have this chance again,” says Bernardi. “I plan to take time to absorb every detail of race weekend.”