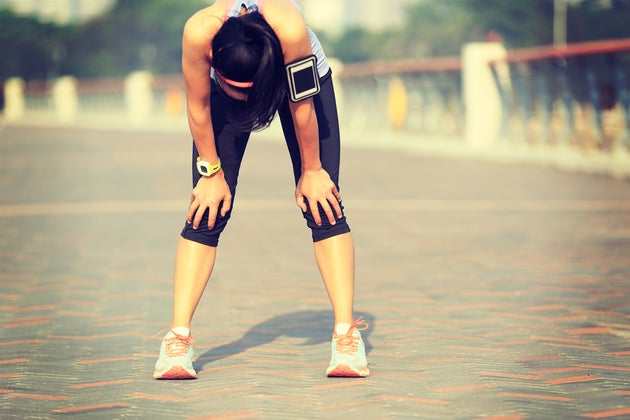 I find myself wondering more and more these days, when will it ever be good enough? When will I feel satisfied and successful in my running, writing, parenting, marriage, friendship and life in general? It seems a never-ending quest for, not happiness exactly, but just being better—better than yesterday, better than her, better than him, better than last time—where does it end? How do I control the ending or, is the never-ending-ness what makes me, and others like me, successful?

After I read the Women’s Running article titled ‘Why Giving 100% May Not Be Your Best Effort,’ I immediately downloaded the book written by the author of the article, Dr. Stan Beecham. A top level sports psychologist, Dr. Beecham gave me my first clue into why it may never be good enough, and what to do about it.

After I trained for and ran my very first marathon in 3:55, I wanted to qualify for Boston. A year later, I did (with 10 minutes to spare) finishing in 3:30.

After racing duathlon for a spell, I qualified for the USAT Nationals competition and then the World Championship, so I moved on to triathlons.

Last year I qualified for USAT Nationals and, now my current goal is to qualify for the USA Triathlon World Championship.
I had some amazing races along the way and some fantastic failures too. I did things that were hard and scary and painful and accomplished big goals. What I didn’t do was take a lot of time to bask in the success of attaining those goals.

I quickly move from one big goal to the next, maybe taking a week or two for a really big accomplishment (like the Duathlon World Championship) to sink in and I’m back at it, hammering away at my next big goal.

I’m surrounded by people who do the same.

There are plenty of running bloggers I know who chase one big goal after another as I do. My husband is relentless in his pursuit of the next big client in order to grow his company, although it is already wildly successful, and I have several very accomplished, professional friends who continue to reach goal after goal, hardly stopping to notice as they blow by them.

When is it ever good enough?

My favorite chapter of Dr. Beecham’s book is the one titled ‘Turning Better Into Best.’ It makes too much sense:

“…we have this grave concern that if we ever become happy with our current status, then we will somehow lose our edge and plummet into mediocrity.” –Dr. Stan Beecham, Elite Minds

Well, I’m not that dramatic about it but, basically yes, that is what I think and it is reflected in my actions. It’s also all around me and constantly pounded into my subconscious.

We so often see the hashtag #betterthanyesterday and it may even be a tagline for a running shoe and clothing company. It’s definitely something you have seen and heard at the professional sports level and “beating yesterday” or “being better” is a constant sports mantra.

“Growth is a natural process and happens whether we desire it or not, but the belief that one needs to be better actually hinders this process. Our consistent criticism and failure to make peace with who we are now has very detrimental effects on both mind and body.” –Dr. Stan Beecham, Elite Minds

Dr. Beecham suggests we tell ourselves to do the best we can and that will be enough. Sometimes we truly cannot do better than yesterday but we can do our very best every single day. He also points out that you cannot simultaneously strive to do better and be your best, therefore you have to chose. When he puts it that way, it seems obvious.

Think about a time in your running and racing life or professional life when everything went perfectly. It doesn’t necessarily mean a win or more money or some big reward but, just when you felt you could not make a mistake if you tried, when all the stars were aligned and you felt strong and unstoppable.

Now think about what that felt like. Was it a struggle? Did you feel like you were fighting for every inch, mile, word or movement? Most likely, it was effortless. It flowed.

One of the very best duathlon races I ever had, I did not even know I was winning until the last half mile of the run. When I came though the first transition, my coach knew I was the first woman and simply said “have fun.” I did. I won a sword.

Of course the race was hard but, I was in what any athlete would call “the zone.” My body felt strong, my mind was laser-focused and it just flowed.

Was I thinking about winning? Obviously not since I was shocked when a race official on a bike rode up to me and said into his radio “I have the lead woman” with a half-mile to go. That is the point at which my mind and body freaked out! Before that, I was simply doing what I had been trained to do and, on that day, it was effortless.

I’m positive, when you think of your perfect moment, it does not involve trying to be better. You simply were at your best.

So, to answer the question the title of this article asks, no, it is never good enough. It’s not better than yesterday or last week or last year. It actually cannot be any of those if you’re doing your best every single day.