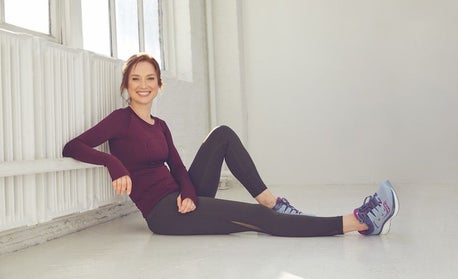 Ellie Kemper has risen to the top of Hollywood’s roster of comedic actors with her sweetly offbeat portrayals of perpetually perky yet clever characters. She has had scene-stealing roles in some of the most defining movies and television shows of this millennium: from the bashfully naïve yet insightful Erin Hannon in The Office to her hilarious turn as the woefully uninformed Becca in Bridesmaids to her current role as Kimmy in the hit Netflix comedy Unbreakable Kimmy Schmidt. Kemper’s own sincerity and wit shine through in her roles, which is one of the reasons her characters always feel so relatable and authentic.

Born in Kansas City, Mo., she moved with her family to St. Louis when she was 5. She still visits the city often, and her Midwestern upbringing is evident in her demeanor both on and off the screen. Kemper has that rare ability to make anyone she is talking to feel like they have her undivided attention, despite the fact that she is talking to a total stranger. And she is genuinely interested in the people she talks to, listening intently while they speak and asking questions about their lives. Kemper is the epitome of a good egg. She’s also whip smart and has expert comedic timing. A Princeton graduate with a degree in English and a solid background in improv comedy (she spent time with the Upright Citizens Brigade, an improv group founded in part by the one and only Amy Pohler), Kemper has the ability to bring pathos and unexpected insight to the characters she inhabits in a way that feels natural without being overwrought or out of step with the character.

I am admittedly a huge fan of Kemper’s work. In a world full of political vitriol and humanitarian disasters, I often gravitate toward media that make me remember and appreciate all of the good and fun there is to be had in this life as well. My go-to for soul comforting is reruns of The Office and cute dog pictures and videos online (I’m looking at you, @dog_rates).

Knowing that I was going to meet one of my favorite actors, from one of my all-time favorite shows, made me nervous. I’ve had this experience before, meeting someone whom you admired from afar only to have your opinion of them change and forever alter your experience of their work. That’s a pretty harIt’s Cool To Be Kind: Our Interview With Ellie Kemperd pill to swallow. Unsurprisingly, I was anxious as I waited for Kemper to arrive the day of the cover shoot. Would I ever be able to watch The Office with the same joy again? And I’m a huge fan of Unbreakable Kimmy Schmidt as well—what if I could no longer enjoy the hijinks of Titus and Kimmy? I would be devastated.

I was standing at a mirror, fighting with an eyelash that was determined to grow backward, directly into my eyeball, when I saw the door open in the mirror and Kemper walk in. Not the first impression I was hoping to make, to say the least. I spun around and greeted her somewhat sheepishly. Kemper’s natural bubbly energy and beauty shone brightly. She immediately extended her hand and introduced herself to me and the crew. Her excitement at being on the cover of Women’s Running was infectious. Photo shoots can be tricky things to organize and execute. The process often requires a lot of personality management with all of that creative energy bundled together in one room. But Kemper exuded a calm and friendly presence that instantly put everyone at ease, and she was unfailingly polite to everyone at the studio, making this shoot the most enjoyable one I’ve ever worked on.

We talked about her career, her love of her St. Louis hometown, the joys and hazards of running in the city and how fitness can act as a balancing influence in a busy life. Kemper has a lifelong relationship with fitness and running. I asked her how exercise factored into her family life as a kid, and Kemper shared this glimpse into her childhood and very organized psyche: “My dad is very athletic and exercises just about every day. My mom will be the first to tell you that she loathes exercise. I need to exercise most days, or else I don’t feel like myself. I do recall fitness and nutrition as being a major part of my life from a pretty young age. I made this weekly schedule around second grade, and it included exercise sessions every day. I mean, they were not intense sessions. Running laps in the basement and doing jumping jacks outside. I sound insane. I liked order from a young age!”

This revelation made me laugh but also reminded me of a story that Tina Fey, writer and producer of Unbreakable Kimmy Schmidt, told to Vanity Fair in 2014 about Kemper’s work ethic. Fey was talking about a scene in Season 1 that involved Kemper interacting with a rat. The scene didn’t start filming until about 2 a.m., so everyone on set was tired. Fey said (speaking about Kemper), “To go in there having to deal with playing the scene, dealing with a rat wrangler, and holding a rat, she had this very specific stillness and calm between takes. A lot of people would have been like [whiny voice], ‘I don’t like it!’ Or made a big show of how great they were doing handling the rat. And she was just so precise and all-business take after take. Her calmness made the rat calm.” Kemper definitely displays the same quiet professionalism on set this hot August afternoon in a studio in Manhattan. It’s very clear that she is focused on giving her best to the photographer and for the shoot. And she maintains all of this focus while keeping up conversation with all of us in the studio, and of course, cracking jokes and generally being an awesome human being.

As the photographer snaps away, we talk a bit about how Kemper started running in high school. She says, “I first started running to train for my high school field hockey team. This was the summer after ninth grade. I didn’t officially run on a team until I did track and field in the spring of 10th grade. I would get sick with nerves before every meet. I’m getting sick with nerves just remembering it now. I ran the 400 meters, the 800 meters, and sometimes the mile and the 200 meters. I was always so happy when those meets were over. A glutton for punishment!”

This eventually leads to a discussion in the studio of how we all feel that we look like elegant gazelles when we run and how quickly reflective windows on a city run will shatter that fantasy for you. Nevertheless, running in a city or anywhere else gives Kemper some much-needed routine in her often packed and variable schedule, especially now that she has a young son to care for as well. “I have turned to running even more since having a baby. Time is a more valuable resource to me now, and I am lucky to live near some great parks. Being able to go for a run without having to travel anywhere is a huge gift. I do feel like I am the best version of myself after I have a nice run.”

As Kemper begins to gear up for the production to start on Season 4 of Unbreakable Kimmy Schmidt, I ask her how having to coordinate her own and her husband’s changeable and unpredictable schedules impacts her running. “I love running because you can do it pretty much anywhere, anytime,” she says. “It is the easiest and most convenient form of exercise for me. I never, ever feel worse after running. I have to remind myself of that when I am reluctantly lacing up my shoes to go out on a soggy day. There is a 100 percent chance that I will feel better when it is all done.”

And I can attest that there is also a 100 percent chance that Ellie Kemper is the nicest person in Hollywood. Look for Season 4 of Unbreakable Kimmy Schmidt on Netflix later this year.

A conversation with Ellie Kemper about Kimmy Schmidt’s running habits

What does Kimmy love about running?

I think Kimmy loves just about anything that she can do outside. Because, at last, she can GO OUTSIDE! (After being trapped in an underground bunker for 15 years.)

What is Kimmy’s favorite holiday running event: a Turkey Trot, a Jingle Jog or a Hot Chocolate 10K?

I think the Hot Chocolate 10K wins here. Kimmy turns to cocoa in times of distress, so I think that combining a longer run (requiring endurance and tenacity, of which Kimmy has loads) with a rewarding drink at the end could check off a lot of boxes for her.

Who is Kimmy’s ideal running partner: Lillian, Titus or Jacqueline?

I think that, of these three, Jacqueline is likely to be in the best shape, and so Kimmy would enjoy running with her the most. Kimmy is preternaturally strong, and also competitive, so I have to think she would want someone to challenge her.

Which Celebrity Runner Are You?

Celebrity Haylie Duff Shares How Her Food Blog Was Born