A bronze medal seemed possible for Elizabeth Baker of Team USA when she passed Melissa Reid of the United Kingdom with a half-mile to go in the 5K running portion of the first-ever Paralympic women’s triathlon in Rio de Janeiro on Sept. 11.

Then came the unimaginable.

“All of a sudden, I felt dizzy,” Baker recalled. “My legs felt like Pinocchio puppet legs. They went in every different direction. I put one foot in front of the other [in an attempt to] cross the line. I put one foot down and I just went. …I felt extremely dizzy, my legs lost motor control. I went down.”

Baker, who is visually impaired and was running in the PT5 division with a guide, triathlete Jillian Petersen, got back up. However, Reid and her guide, Nicole Walters, passed them. Baker then fell again before standing up and walking across the finish line for a fourth place finish (she completed the 5K in 21:56). She also fell afterward in the medical tent.

It was also a difficult moment for Petersen, who said she was unsure what to do when Baker fell because of rules for guides, who are tethered to their runners and cannot lead them.

“We have to be .5 meters from them at all times,” Petersen said. “The area up to the finish is not a lead-free zone. At least, that’s how I read into it. I don’t know if we could touch, carry or hold them.”

Petersen had not been a guide before this year and this was her and Baker’s second triathlon together. Video footage shows Baker falling as Petersen reaches for her. Baker then falls a second time, again with Petersen reaching out to her.

“[Guides are] not allowed to lead, the athlete has to finish first,” Baker said. “[Guides] cannot tug on [their runner] with the tether. …I think she could have given [assistance], but it happened so quickly. She said, ‘Oh, my God,’ started to touch me, [but thought it would lead] to disqualification.”

“Going into the race, I had no clue where I’d end up. I was so new, I had no opportunity to race the top-tier women who were 1-6 in the final,” Baker recalled. “To be that close, so close, to let it go away, as I had time to think, [if I could have done] anything different, willed myself across the line.”

In her life and career, Baker has shown plenty of willpower. She was diagnosed with Stargardt’s disease, described as “a juvenile form of macular degeneration,” on the Team USA website.

“In elementary school, when I had eye tests, they sent a note home to my mother,” Baker said. “I would go to see doctor, who could not tell that anything was wrong. I could not read the eye chart. With lenses, it was no different. I was told it was a behavioral issue. A lot of eye therapists said ‘we could not help you.’”

When she was 15, she was found to have “a little bit of scars on my retina,” she said, and was subsequently diagnosed with Stargardt’s disease.

She said that depending on who gives the chart, her vision can range from 2150 to 2400.

Yet this did not stop Baker from competing in triathlons, even if it took some time. She attempted her first triathlon in 2002, when she was in her late 20s.

“I did not tell anybody I couldn’t see,” she said. “I crashed quite a bit on the bike.”

Baker, a veteran of multiple marathons, including the Nashville Motor City Marathon and the Chickamauga Battlefield Marathon, said that she did “not enjoy” the triathlon at first. But she had always had a goal of completing an Ironman by age 40. Not only did she meet that goal, she won her division.

“When I finished, someone said, ‘you were pretty competitive, you might think about getting into the Paralympics,’” Baker recalled.

She had not known that the event would debut at Rio, but she wanted to join Team USA. The road, again, would not be easy.

“I had no shot, no points, no [qualifying] races to get to,” Baker said.

Then, at the last minute, she got into a Detroit ITU qualifier in March. She described it as an opportunity “for folks with no points, who had not earned a slot, to take one. I was just grateful for the opportunity to be at the Games.”

Baker would be on the first-ever US Paralympic triathlon team. However, a rule change prevented Baker’s usual guide, Sarah Gibson, from being her guide at the Paralympics. (Gibson’s husband is also Baker’s coach.) The new rules called for professional athletes to be guides.

“I think she was very disappointed,” Baker said. However, she added, “We knew one year ago, this was an option.”

Her new guide would be Petersen, a triathlete since 2006 and a professional since 2007. The change occurred just a month-and-a-half before Rio. The new teammates had to get acquainted fast. They did a race together, the Paratriathlon Nationals in Santa Cruz. 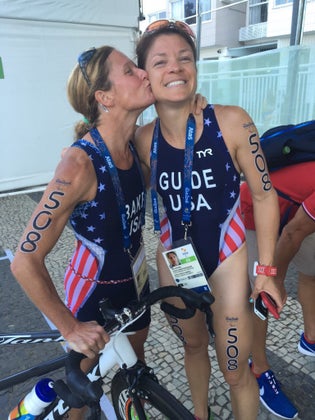 “Liz was my first actual guiding [experience],” Petersen said. “Rio was our second [time] together …It was kind of quick. It was challenging. Most [runners and guides] had a lot of seasoned time together, a lot of experience. I thought we came together.”

Even before the Paralympics, though, Baker had been ill with strep throat. She took antibiotics, but was left with a head and chest cold. The triathlon took place on what she described as the hottest day she was in Rio, 85 to 90 degrees, at 11:35 a.m. local time. The first leg was a 750-meter swim at the Copacabana Beach; Baker said the water was beautiful and clear. She and Petersen swam tethered at the calf.

“There were a lot of people tethered and you can’t pass them,” Petersen said. “Half the people are blind. It was very difficult and challenging. I did the best I could.”

Baker completed the swim in 16:28, in sixth place. The bike portion was next: 22.28K, in four laps of 5.57K. Petersen rode in front of Baker on their Matrix tandem.

“There were about four 180s on each lap,” Petersen said. “That was fun. It was definitely not the easiest [course], more technical.” 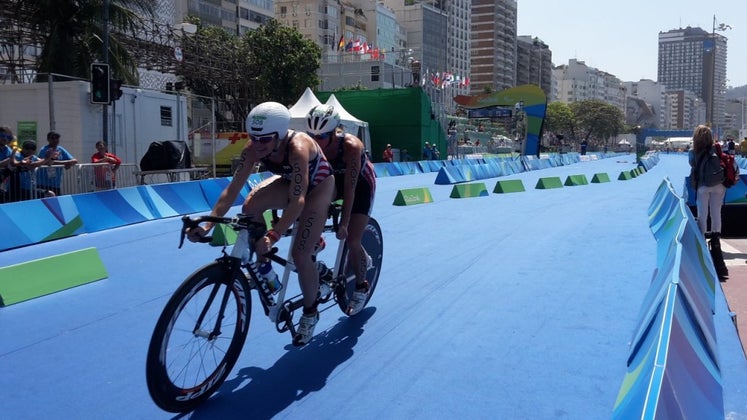 But with their 51:42 time on the bike, they had passed two competitors into fourth place. They were just 40 seconds away from third. However, both Baker and Petersen were experiencing trouble.

“I was not feeling the greatest—kind of nervous,” Petersen said. “I was hurting pretty bad.” Meanwhile, Baker said, “I did not have as much to drink on the bike as I had hoped.”

And when the run began, Baker’s troubles continued.

“A hundred meters in, I felt a strange dizziness,” she said. “I didn’t know what it meant. I had never experienced it on a run. I can run dizzy, so I kept going.” But, she said, “it got progressively worse as I ran. I tried …not to focus on it, [but on] components of the race. I said to Jillian two times through the race, ‘I’m very dizzy.’ I don’t know why I said that—to get it off my chest?”

“I was saying words of encouragement,” Petersen said. “’You’re a supermom, a superwoman, you’ve already done an amazing job. A little bit more effort. Maintain, lean forward, drive with your legs, push off with your toes.’”

They completed the first 2.5K lap and “everyone was just cheering,” Petersen said. “There was an adrenaline rush. We were feeling that energy.”

At 1:25 miles, they had made up almost a half-minute on the third-place competition.

They rounded a corner, now five seconds down with three-quarters of a mile to go.

“She was sick the whole week before,” Petersen said. “For her to be able to race to that capacity is amazing, above and beyond.”

“The third-place female was still ahead of me,” Baker said, “but I felt pretty good. My legs were struggling, but it was not overly hot. I could [either] make a move, or hang here and follow in, which was not what I’m here for. [I wanted to] get this thing, I have it in me. I picked up the pace, and passed [the third-place runner].”

Half a mile remained. Ahead lay the finish chute.

“It was a small ramp with a blue carpet,” Baker said. “I saw the finish line.”

“I was sure we had third,” Petersen said. “I looked back. Someone was coming fast. Liz slowed down. Her legs looked like they were about to give out. It was not a normal running gait … I said, ‘Someone’s coming.’ I screamed loud, but the crowd was so loud, she couldn’t hear me yell. As soon as she passed us, Liz just collapsed. It was heartbreaking for me. I [had] learned about her life story. I was definitely emotionally invested.”

Baker had also been emotionally invested, but she said the finish did not sink in until after the race, in the medical tent.

“I walked out and had a sinking sense, a stinging disappointment, at how close I was,” she said.

It was a difficult finish for both Baker and Petersen, but each found positives from their Paralympic experience. Baker said being on the first-ever US Paralympic triathlon team was “amazing, one thing nobody can ever take away. It was a fantastic team. Everyone was just so encouraging.”

Petersen agreed, saying, “Everyone on that team was amazing. I wish we had gotten the opportunity to know them before the races. They were all incredibly welcoming.”

And even though the defeat stung, it has motivated Baker to keep competing.

“I don’t want it to be my last,” she said. “I don’t want to go down like that. If financially I can do it, and I’m still gaining improvement in speed workouts, and pool and track workouts, then I want to [continue].”