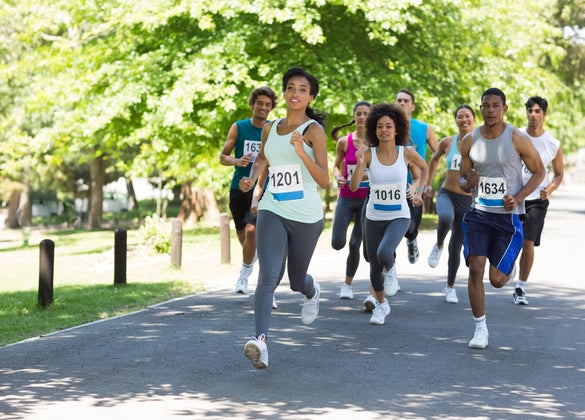 Every sport is subject to a certain amount of ridicule and stereotyping, and running is no exception. There are lots of lists poking fun at our sport that even the most serious runners can laugh at (the runner with the prominent watch/sock/sports bra tan lines, anyone?) but there are a few myths about runners that deserve to be busted. Here are five types of runners who get unfairly stereotyped—and the truth about the awesome athletes they really are.

The mother-runner
Fiction: A runner who is also a mother can’t be that serious of an athlete. She’s too busy running after her kids to do any real running, and jogging with a stroller is a joke.

Fact: Mamas are some of the most hardcore runners out there. Their free time is precious so they give their all to training sessions, and any mom knows there’s no better motivation to run a little bit faster than the threat of a baby’s cry interrupting your workout. As for the stroller? Any doubters should try pushing a 15-pound cart on their next run. With a 30-pound tantrum-y toddler. Uphill. Case closed.

The marathon maniac
Fiction: She lives for nothing but the run and is chasing 26.2 at the expense of everything fun. She sacrifices her social life for Saturday long runs, skips dessert for seconds of kale, and her idea of hot gossip is talking about the latest GPS to hit the market.

Fact: Most lies have a seed of truth to them, and yeah, marathoners put a lot into preparing for the big race. But just like they’re smart about balancing a tough week of training with a recovery day, they’re just as dedicated to combining an early morning run and brunch with friends or relaxing after a run with a foam roller and reality TV. And come on, every runner knows there’s nothing better post-race than a juicy cheeseburger. Sorry, kale.

The “mature” runner
Fiction: Any runner over 60 can’t do much more than slow jog a mile around the local track. Races are totally out of the question.

Fact: Age ain’t nothin’ but a number when it comes to running. More and more women not only run late into life but also compete (and kick ass doing it!). The only numbers worth discussing are your mileage, your PR, and how many pairs of sneakers you hoard.

The barefoot runner
Fiction: The hippie of the running world, she does her miles in minimalist shoes, fuels up with organic granola, and cools down with wheatgrass shots. Probably doesn’t wear deodorant either.

Fact:  Don’t judge a runner by her shoes (or lack thereof). Just because she’s got less on her feet doesn’t mean she’s any less of a serious runner; she runs just as hard as the rest of us in what’s most comfortable for her. And it definitely doesn’t mean she’s some earthy-crunchy type, although there’s nothing wrong with crunching on a little pre-run granola. Just put on a little pre-run deodorant too, okay?

The different body type runner
Fiction: Everyone knows that if you’re not lean and toned, you can’t possibly be a real runner.

Fact: First of all, it’s nobody’s right to judge what someone else looks like and definitely nobody’s business what someone weighs. More than that, runners come in all shapes and sizes and it’s impossible to know someone’s health or ability from a glance at the outside. Running is hard work and anybody—in any body—earns the title of runner for getting out there. So just remember that the next time you see someone out jogging, she’s most definitely a real runner.