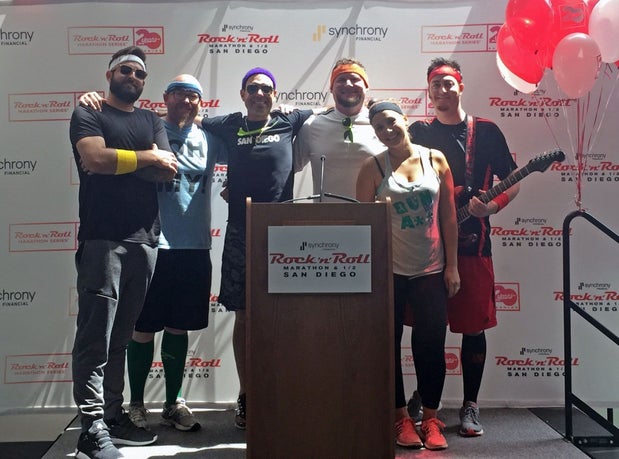 For 20 years the Rock ‘n’ Roll Marathon Series has celebrated running and music by bringing the two together for some of the racing world’s most athletic parties. With bands stationed at every mile of the marathon and half marathon courses, the race series provides runners with welcome entertainment that helps them cross the finish lines. Last weekend, the series celebrated the 20th anniversary of its inaugural event in San Diego, with more than two dozen bands staged along the route, guaranteeing participants a live music interlude for every mile they conquered.

Disappointing Joseph was one of the local bands that performed at this year’s marathon. Comprising band members Tommy Child, Carl DeSiena, Joey Hambrick, Danny Hambrick, Luke Kirkendall, Tad Ryan, Charlie Rosolino and Dania Scavia, Disappointing Joseph is a local cover band that plays classic hits as well as modern chart toppers. The band first performed at this race last year and has appeared at five events within the series overall. “It’s my favorite gig ever,” Ryan said. “We’ve been playing for 16, 17 years off and on, but it always comes back to the Rock ‘n’ Roll.”

Dressed in running gear complete with sweatbands and running shoes, Disappointing Joseph cheered runners on from a stage along Morena Boulevard, where marathoners passed them twice during miles 14 and 18. The band’s bubbling energy during performances of songs like Young MC’s “Bust a Move” and Billy Idol’s “Rebel Yell” encouraged runners struggling through 26.2 miles to press on. “You see a lot of characters running the marathon,” Kirkendall said. “We see everything: we see people on bikes, disabled veterans. You’ll see people in full army gear carrying 100 pounds and walking the entire thing.” 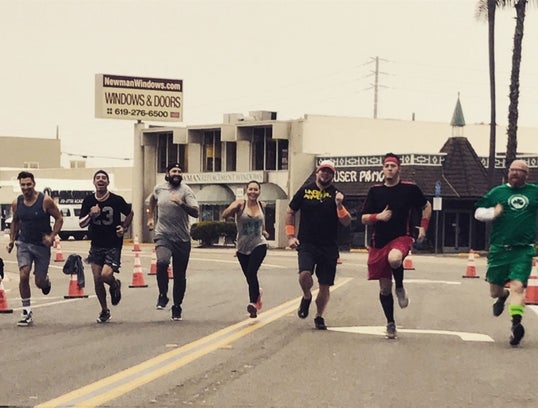 During their race performances, the band members make efforts to recognize runners that catch their attention. They call out to runners wearing flags from their native countries draped over their shoulders, runners that fist-pump along to the music and even runners with beards that the band members find impressive. Though the time they share with each athlete is brief, Disappointing Joseph tries to make that interaction as positive as possible. “That’s what we’re trying to do, is make sure everyone’s having a good time,” DeSiena said. “We’re having a good time, and typically they feed off our energy.”

A marathon is a long race to run—but when musicians are singing pop hits and acting silly onstage, the distance doesn’t seem quite as far. “They’re running by as fast as they can, but there’s more of a connection with those people, at least for me, than I have the rest of the time,” Kirkendall said. “It’s very special.”