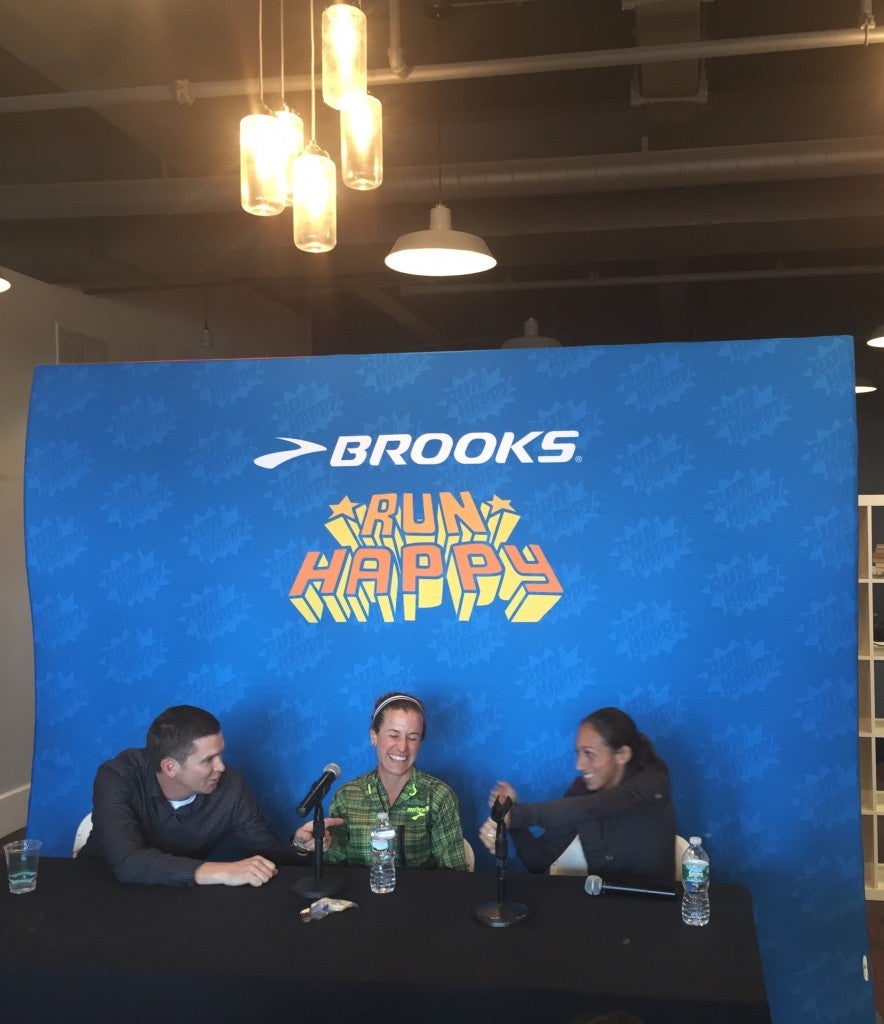 On Marathon Monday, Desi Linden and Amy Cragg (formerly Hastings) will line up in Hopkinton to run their first 26.2-miler together since the 2012 Olympic Trials Marathon. Standing among the likes of Shalane Flanagan and Ethiopian favorites Mare Dibaba and Buzunesh Deba, Linden and Cragg perhaps have a competitive edge when it comes to knowing the competition. The Brooks-sponsored athletes were teammates in college, as well as roommates for a period of time—so they’ve spent quite a bit of time getting to know each other.

RELATED: Elite Athletes Crank It Up 30 Days Before Boston

“It was a joke in college that we were going to start a band,” laughs Cragg at the Brooks press conference on Saturday in Boston. “For my first marathon, Des gave me a guitar, and I still only know one chord. For her first marathon, I wrote her a funny song.”

With a sly look of do-not-tell in their eyes, Linden and Cragg exchanged nervous laughter over the request to share more throwback memories of college. Although these two fierce competitors have a lot in common—they share a sponsor, they share sub-2:30 marathon PRs, and they share an alma mater at Arizona State University—their approach to Marathon Monday reveals some differences when it comes to strategy, experience and attitude toward Boston.

For Linden, this will be her third time lining up in Hopkinton, and she could perhaps be the not-so-underdog underdog to win the whole thing. She’s fast; after clocking a 2:23:54 at last year’s Boston Marathon and narrowly missing the win by two seconds in 2011, a top spot on the podium isn’t unrealistic for the Michigan-based runner.

“Everyone knows [Des] runs really smart, she runs her best possible race every single time, and that’s no secret,” says Cragg of her college teammate, who has a “predator-like style” of marathoning according to some, due to her very strategic, calculated and intense racing style. “She knows how to run the Boston course, so I think everyone is kind of going to be looking at her. If she’s holding back, there might be a reason.”

With the absence of last year’s champion and her two Boston titles hugely on the line due to doping, it’s a shared belief among many that this year’s field is wide open and the win is for the taking by anyone—which is encouraging to the strong American runners who will all by racing for a podium spot and potentially the first American female win since 1985.

“It takes a perfect day, it takes a bit of luck,” says Linden. “If you put in the work and race well, anyone can have a shot [at the podium].”

For Cragg, Marathon Monday is all about running her best race possible, whether it results in breaking the tape, a huge PR, a spot on the podium, or none of the above. After scratching right before last year’s race, Cragg adjusted her training and returned this year for her first journey from Hopkinton to Copley Square.

What U.S. Elites Say About The Boston Marathon

“I think she’s ready for a big one. It sounds like her training has gone really well. She seems confident,” says Linden of Cragg’s 2015 Boston preparation. “She’s done all the right things during the buildup, and she’s gotten on the course a bunch, which will be a huge advantage for her.”

Cragg, who lives in Providence, R.I., has spent time on the course every weekend since March, memorizing key areas for success, especially through the hills of Newton. For her, the hometown advantage feel brings the runner comfort to ease some first-timer nerves.

While both runners may have different goals going into tomorrow’s marathon, they do share one strategy the night before: put the feet up, relax and think of anything other than the marathon they’ve intensely focused on for months.

Des Linden: “When it Means This Much It’s Easy to Keep Showing Up”

Des Linden is Still In It, For the Love of the Run