All photos by Christian Pondella.

“It is the brain, not the heart or lungs, that is the critical organ.” —Roger Bannister

A radiant Alpine sun is still rising over the snow-capped peaks of Mammoth Lakes, Calif., and Deena Kastor has already accomplished more than what most of us will do in a day. Scratch that—a week. After getting her 7-year-old daughter, Piper, off to school, Kastor, the American record holder in the marathon, crushed a 20-mile run, plowed through her inbox, walked the dogs, returned a bunch of phone calls, did a magazine interview and finished a handful of other tasks in preparation for an upcoming national tour to promote her new book, Let Your Mind Run. Later in the day, there will be craft projects with Piper, another run, a Girl Scout meeting and family dinner to prepare.

Kastor’s dizzying daily to-do list is enough to send any sane person into major meltdown mode. And yet she tackles it all with a cool aplomb—with joy, even. It’s easy to assume (especially after meeting her in person) she was just born a chirpy person, lucky to inherit an innately positive mindset. But that’s an overly simplistic view of a complex metamorphosis. The truth is she has fought like hell for her happiness, using running to shape and sharpen her mind. It is her career as a professional runner—a 34-year journey of self-discovery through the highest peaks and lowest valleys—that has yielded the mental tools that have not only allowed her to unlock her running potential but also become a happier person.

“As a culture, we’re so obsessed with gym time and how many miles we log, when so much of our power and health lies in the way that we think,” says Kastor, 45. “We need to pay more attention to training and flexing our mental capacities to strengthen any endeavor.”

That conviction inspired Kastor to pen her memoir (co-written with Michelle Hamilton), which was released in April, a few days before she was to race this year’s Boston Marathon. Her story begins as a gangly 11-year-old girl growing up in Agoura Hills, Calif., a Los Angeles suburb situated near the foothills of the Santa Monica Mountains. Her parents wanted her and her sister to play organized sports so that they had positive role models and were steered toward a healthy lifestyle. “I tried soccer, softball and ice-skating, and failed miserably in so many ways, whether it was boredom or not being coordinated enough,” says Kastor, known then as Deena Drossin.

A Star From The Start 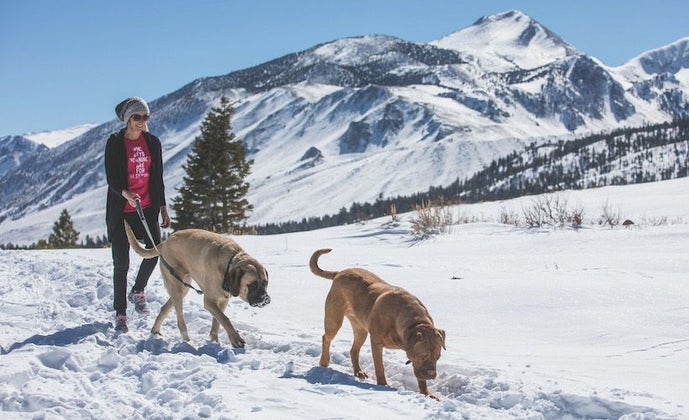 Why not give running a try, they thought, and signed her up for the local track club. She loved it instantly. “Running on the local trails and in the mountains, having the camaraderie, the constant motion, I was in love from the very first day,” Kastor recalls. “The ease of it made me feel competent and free. Everything we were asked to do, I could do.”

Not only could she do it, she flew. Right away, Kastor started winning. Everything. And it didn’t feel that hard. People started using words like “prodigy” and “phenom” to describe her talent.

“It felt odd and uncomfortable to have that much attention at such a young age because my running ability caught my family by surprise,” says Kastor, who was adopted. “I don’t think we knew where my athletic talent lay, so I was just exploring it through running and showing up to every competition and hammering from the gun. There was this beautiful pain to it.”

Her dominance continued into high school, where she won three state cross-country titles. She was recruited to run for the University of Arkansas and earned the SEC champion title four times and All-American honors eight times. Still, there were some frustrating losses at important collegiate races, nagging injuries and periods of suffocating burnout.

She wouldn’t understand any of that until after graduation, when, aimless and frustrated, she took a leap of faith and decided to pursue professional running under the guidance of renowned coach Joe Vigil in Alamosa, Colo.

“Coach Vigil cracked open the realization that I had been running nearly my whole life and yet didn’t know very much about the sport,” Kastor says. “So I got very excited to find out all that I didn’t know.”

Becoming A Friend To Herself

Coach Vigil never talked about talent or winning. He talked about character and attitude. “He has this way of igniting a fire in people and allowing them to see more opportunity and possibility within themselves,” Kastor says. “He helped me understand how much perspective weighs in our experiences, and that’s really the idea I’ve toyed with throughout my athletic career: How can I twist and manipulate my mind to get the best out of myself?”

Mostly, she learned how to pay attention—to the thoughts that made her feel strong and the autopilot mental chatter that made her feel weak. She gave herself permission to feel disappointed by a lackluster workout or race result, but would also use it as a springboard for improvement. “You can have a good cry, you can say, ‘This sucks,’ but how can you grow from it or make sure you can be stronger or wiser next time around? How will you climb out and build a better day tomorrow?”

Early in her pro career, Kastor also realized that being less judgmental—and more compassionate—to herself allowed her to push harder physically. “I needed to be a friend to myself,” Kastor says. She went out to dinner solo, and learned to be perfectly happy in her own company. She treated herself to simple luxuries, like an expensive lotion or good bottle of wine. Kastor came to see herself differently—more whole and worthy of respect and success. “When I made taking care of myself and cultivating a positive mindset my priorities, I found that I could get a lot more out of myself.”

The proof is in the record books. Kastor has set American records in distances ranging from the 5K to the marathon (2:19:36, a record that stands today). She’s earned multiple cross-country world championship medals and bronze at the 2004 Athens Olympics, and has broken the finish line tape at the world’s most prestigious marathons, including Chicago (2005) and London (2006, when she set the American record).

All the while, she was honing her mental toolbox. “It was always a game to see how I could unlock more potential in myself,” Kastor says. “It was fun to see what was behind one thought and how I could be true to that thought or emotion but think it through in a way that better served me. The consistency of that practice built just as miles built in a training cycle.” 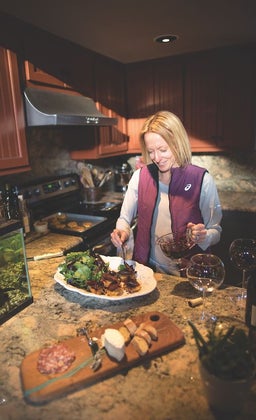 Today, Kastor lives and trains in Mammoth, her home of 17 years, as an elite masters athlete under her coach-husband, Andrew, and with her Mammoth Track Club teammates. (MTC has emerged as one of the country’s premier training groups.) She remains diligent about her mindfulness practice, especially as it relates to nurturing herself and her family. Central to that notion is eating a healthy diet of quality food and enjoying a good glass of vino—or two. Kastor, a longtime foodie/home chef and wine lover, uses only organic ingredients and sustainably and humanely sourced meats in her cooking. “It all starts with quality ingredients,” she says.

In fact, quality is her chosen word for this year. “Quality is the backbone of everything I’m doing—I’m putting in quality runs, I’m spending quality time with friends and family, I’m only taking on quality projects and things that feel enriching, I’m eating quality food and getting quality sleep.”

That mindset—and a fierce devotion to expanding her positive outlook—has allowed Kastor to race at the top of her sport for more than three decades. When she’s not training and competing—or wearing her other hats as mother and wife—Kastor travels for public speaking engagements or to serve as an ambassador for the sport.

She wants other women to know that they too can crack open their physical and mental potential by choosing their perspective. And that running (especially when it’s hard) can be a powerful vehicle for realizing a life-changing mental shift.

You just have to let your mind run.

I Went To A Running Camp Led By Deena Kastor