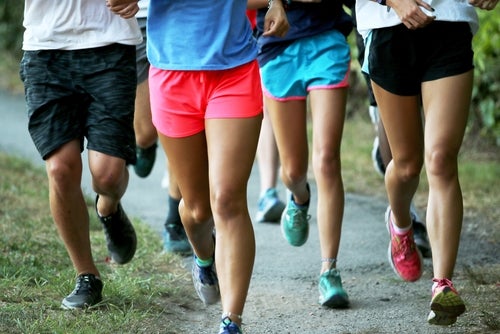 On the surface, running seems to be the one place where men and women have relative equality. Both men and women can take advantage of training and racing opportunities worldwide. We race in mixed gender masses, and often train side by side. Yes, men might dominate the lead pack in a race, but it stands to reason that women—though biologically different than men—are incredibly resilient and tough. We pound out the miles just like the “big boys,” becoming an overwhelming presence in road races and running stores. It suffices to say: We aren’t here to play around.

Related: The Impact Cross Country Has On Young Girls

Despite our resilience, though, and despite the narrowing gap between the fastest men’s races and women’s race, we aren’t given equality on the cross-country course. I say this because, as a cross-country runner, it is frustrating to me that women run a shorter distance than the men do in a cross-country race. Per NCAA regulations, women race a 6K and men race an 8K (men bump up to a 10K in the championship part of the season). Our races are 2,000 meters shorter.

I don’t have any problem with racing a 6K, and I wouldn’t have any problem with racing an 8K or 10K. The way I see it, the issue here is in the archaic idea that a woman can’t run as far as a man. When women’s events were added to Olympic Track and Field in 1928, they were strictly limited to short distances for this very reason. But that was almost 90 years ago—90 years in which women have shown how tough we really are. And we’ve done it for the betterment of the world, fulfilling a number of roles to help others.

I believe that establishing a universal racing distance for NCAA cross-country athletes would do much the same. It would send a clear message that the NCAA believes in its female athletes and in their abilities. It’s not a message that women are the same as male athletes, because we are not. Our bodies and minds are different, often leading to different race results. But we sure as heck can run an 8K.

Related: 20 Women Who Are Changing The Sport (And The World)

We are brilliant innovators and steadfast companions. We are intrepid adventurers and inquisitive learners. We work as scientists and mommies and artists and business owners. And in all we do, we provide a unique and valuable perspective—running included.

Women have nothing to prove to the NCAA. There is no strength we haven’t already demonstrated. My hope and prayer is that this continued strength will open the eyes of the NCAA to rethink and revise its cross-country regulations.

And if not, here’s what we do. We keep running, you and I. We run cross country if we want to and we enter all races we want—from 5Ks to ultramarathons. Because it is what we love, and secondarily, it is a message to the world that female runners are tough as nails.

What do you think: Should women race equal distances? Should men and women both race a 6K or both race an 8K/10K?

Americans Light Up the Indoor Track