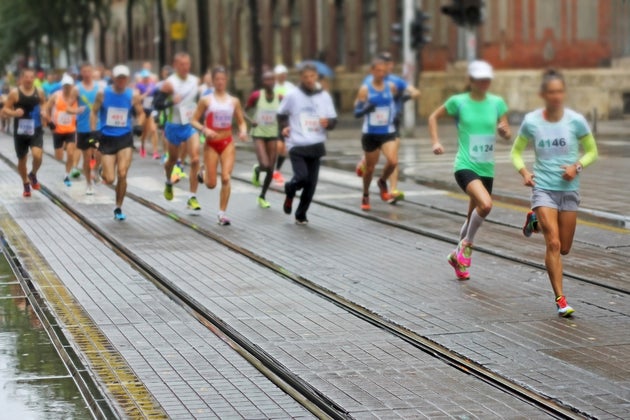 I actually spent a few months training for my first 5K. I loaded the Adidas miCoach program onto my phone, selected the race date (October 23, 2010) and off I went. I ran 3 miles one time before the race so I knew I could do it. Or at least, I hoped I could.

At the time I was working on an article for a local women’s magazine about a fitness company that did ‘transformations’ for their clients (they re-tooled both diet and fitness weekly for maximum results). The day before the race I was scheduled to do a workout with the owner. I told her about my race, hoping she wouldn’t push me as hard as regular clients because though I had been running, I hadn’t been doing any cross training. Unfortunately, my hopes were not a reality and she pushed me to the brink. I woke up the next morning barely able to walk.

I was furious. I slowly hobbled down the stairs upset that after all of this hard work I wasn’t going to be able to reach my goal. That a workout of all things, was reversing everything I had done up until that point. My boyfriend (now husband) silently drove me to the race—he knew he couldn’t say much to make me feel better—and I made my way to the start line alone to meet some friends.

The second I saw them, I completely lost it. I cried—heaving sobs—saying that the workout I had done the day before had destroyed my legs and I wasn’t going to be able to run. My anger had turned to devastation. But I was there, I’d done the work and even though I could barely walk, I knew I had to try.

About a half-mile into the race, I realized running didn’t hurt my legs too bad. Maybe they were numb. Maybe I was too tired from worrying to even notice. But I made it all the way to the finish line—finishing before some of my friends, even—and even though I still could barely walk a step without pain, I had put all of the fears and doubts aside and reached my goal.

The point? Things happen. Your day won’t go to plan. You will be scared—maybe even to tears. You will get frustrated. But as long as you accept it, put one foot in front of the other and push through the pain (safely, of course; don’t run with a sprained ankle or anything) then you’ve already won.

Eventually my sore muscles healed and I went on to run another 5K, then a 10K, then my first half marathon, then some more half marathons and finally a marathon. And though I’ve never cried at a start line since, that day serves as a reminder that pain is temporary and the memory of completing a big goal against all odds lasts forever.