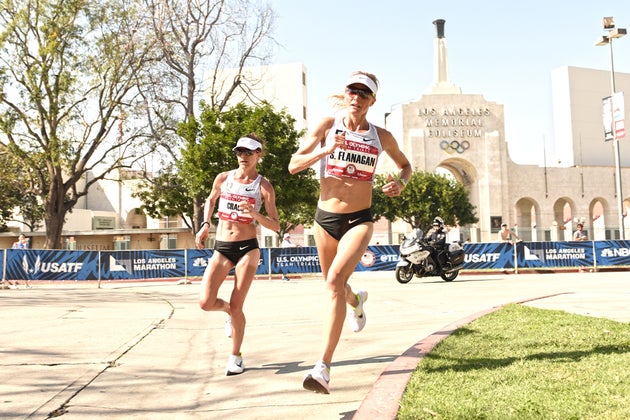 Cragg and Flanagan made the 2016 U.S. Olympic Marathon team, working together to finish 1st and 3rd at the Olympic Marathon trials in February. The Suja Rock ‘n’ Roll San Diego Half Marathon is the only scheduled competition for the two athletes training for the Rio de Janeiro Games.

“We’re delighted Amy and Shalane have decided to make Suja Rock ‘n’ Roll San Diego part of the their Olympic preparation plans,” said Matthew Turnbull, elite athlete recruiter for the Rock ‘n’ Roll Marathon Series. “Both athletes are familiar with our events around the world and I’m sure they will have a race plan with Rio in mind, but they will have defending champion Eri Hayakawa of Japan offering stern competition.”

“We’re so excited to run another Rock ‘n’ Roll half marathon as part of our buildup on the road to Rio,” said Cragg, who won the marathon trials with a time 2:28:20. “Racing at the San Antonio half before the Olympic Trials gave us an opportunity to work together and test our fitness. We are looking forward to pushing ourselves again, this time in San Diego.”

“Rock ‘n’ Roll was our good luck charm on the way to LA, so hopefully it will have the same effect this time,” added Flanagan, who has raced numerous Rock ‘n’ Roll events over the years in New Orleans, Philadelphia, Chicago and San Antonio. “We’re happy that San Diego is our last stop before Rio.”

The 2016 race will once again feature a second day of running with the Suja Rock ‘n’ Roll 5K on Saturday, part of what’s dubbed the Remix Challenge. Runners who complete the 5K, plus the half marathon, marathon or half marathon relay on Sunday will receive a medal for each race, plus a special Remix Challenge medal.

Race weekend kicks off with a free Health & Fitness Expo, where runners can find the latest in running technologies, fitness apparel, health and nutrition information and interactive displays. The Expo takes place at the San Diego Convention Center on Friday, June 3 from 11:00 a.m. to 7:00 p.m. and Saturday, June 4 from 9:00 a.m. to 5:00 p.m. The Expo is free and open to the public.

For more information about Suja Rock ‘n’ Roll San Diego or to register for the event, please visit RunRocknRoll.com/San-Diego.