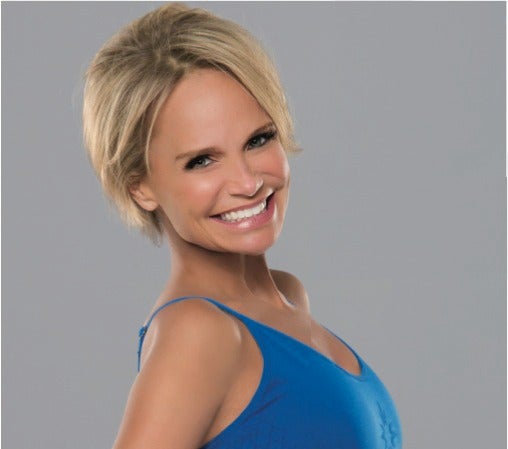 Kristin Chenoweth is the first to admit that for her, fitness and nutrition is a work in progress.

Chenoweth, 45, has an acting career that spans Broadway (as Glinda in “Wicked”), television (on “The West Wing” and “Glee”) and fllm (voicing Gabi, a poison-dart frog, in the animated “Rio 2”).

But as a kid growing up in Broken Arrow, Okla., Chenoweth was singularly focused on ballet, leaving little time or energy for other athletic pursuits. She fueled her rigorous dance practices with a classic Midwestern diet—red meat and potatoes.

When Chenoweth shifted her energy to studying voice at Oklahoma City University, she started going to the gym for the first time. The super petit (4-foot-11!) actress says it was anything but a smooth transition.

“I never in my life thought I would be a gym person,” she explains. “Dance class was my comfort zone.”

Chenoweth says she learned to enjoy running on the treadmill, using the elliptical machine and taking fitness classes, but acknowledges that her nutrition lagged behind.

“I’m embarrassed to say that in my 20s, I pretty much just ate what I wanted,” she says. “I was pretty late to the party in realizing that you can’t put garbage in your body and expect it to run like a Ferrari.”

Chenoweth finally came to this understanding thanks to two difficult medical diagnoses in her 30s: asthma and Meniere’s disease, a disorder of the inner ear that can cause vertigo. The latter is exacerbated by sodium, so the actress revamped her diet to keep symptoms at bay.

Splitting her time between New York and Los Angeles, Chenoweth now finds inspiration outside the gym. Currently, her favorite workout is a long run, during which she reviews her music for any upcoming shows.

“A lot of people find inspiration through running, and I’m definitely among them,” she says. “If I have a concert coming up, I love to put my headphones on and go over my whole program in my head. In New York, it’s especially gratifying, because I’ll run down to the pier on the west side. Even though I’m surrounded by people, it feels like a very private time.”