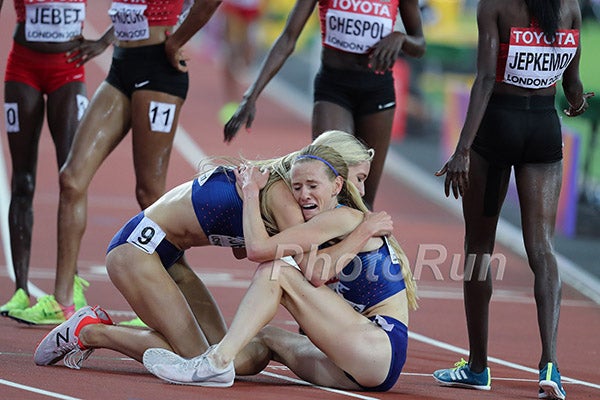 If you are still in love with Emma Coburn’s and Courtney Frerich’s monumental steeplechase finish at the world championships—well, they are racing each other again, along with basically everyone else that wowed us in London.

The 2017 New Balance 5th Avenue Mile, stretching 20 blocks down Manhattan’s most famous thoroughfare on Sunday, Sept. 10, has a crazy stacked lineup on both sides. Runners come from 11 countries and include four medalists and 17 finalists from worlds, as well as both of the event’s defending champions. (Hey, Jenny Simpson!)

Simpson will attempt a record sixth victory down the famous borough stretch, chased by Coburn and Frerichs, as well as Emily Infeld, Shelby Houlihan, Brenda Martinez and Sara Vaughn—all Team USA members from the track in London.

The day begins at 8:00 a.m. in New York and is expected to draw 6,000 runners across 23 total heats, including youth, seniors, New Balance (the sponsor) and FDNY/NYPD heats. The speedy pros head off for a quick sub-5-minute jaunt at 1:30 p.m. And yes, my fellow running nerds, you can tune in at that time on NBC Sports.

She will be racing the 5th Avenue Mile for the second time after lowering her American record and setting a new meet record in the steeplechase in London earlier this month. With her first career world title, the Team New Balance athlete became the first American woman ever to medal in a 3000-meter steeplechase on the world stage. (You all remember that epic-ness.) Coburn won bronze in the steeplechase at the Rio 2016 Olympics and is also a six-time national champion in the event.

In a shocking finish, she won a silver medal in the women’s steeplechase. She also finished 11th in the event at the Rio 2016 Olympics. While at the University of New Mexico, she finished her career with four of the top 10 steeplechase times in NCAA history, including a collegiate record of 9:24.41, which won her the 2016 NCAA national title.

The 2017 world silver medalist is chasing an epic sixth win here; she was the first five-time winner last year. Simpson has earned three world medals in the metric mile, beginning with a gold in 2011. She followed that with a silver in 2013 and another earlier this month. In 2016, she took bronze in the 1,500 meters at the Rio Olympics, making her the first American woman in history to reach the podium in that event. She set a new lifetime best in the mile on July 9 of this year, running 4:19.98 at the London Diamond League meet. Damn!

“I’m excited to be returning to the New Balance Fifth Avenue Mile for the chance to claim a sixth victory. It’s an honor to win each time because it’s never easily done. The simplicity of the race, a straight mile, combined with the level of talent the event draws, makes it the most deserving road mile in the world to be broadcast live on NBC. I am so grateful to NYRR and NBC for bringing the best of running to the widest audience possible.”

She won this event in 2012 against a deep field and competed in the 800 meters at the world championships, as well as at the Olympics last summer. She also graced our June 2017 cover!

Something new and spicy this year is the 5th Avenue Mile ‘Borough Battle,’ as well as the accompanying footwear and apparel collection. Teams of 20 runners from each of New York City’s five boroughs will race to prove which borough is the fastest.