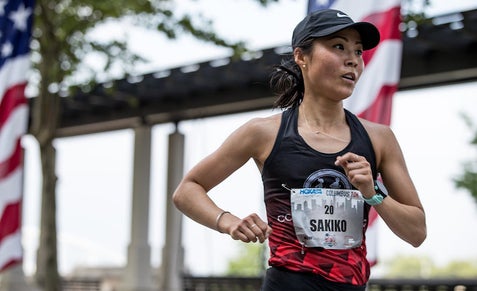 Taking On The Elite

As a high school runner, Sakiko Minagawa only made it to the state track meet once as an individual. As an Ohioan, the state track meet is highly competitive, and her 3200-meter run was nothing to shrug at. Still, it wasn’t reflective of her goals. And it certainly didn’t give any indication of where she would go.

Now 23, Minagawa is pursuing her dream of being a post-collegiate, competitive athlete. She typically runs 75 miles a week, squeezing training in between her duties as a graduate student and employee at the local running store. She admits it’s not always easy to try and make it as an elite runner without the resources of the elite, but she still sees it as completely worth it.

After walking on to the Ohio State cross country and track teams in 2012, Minagawa saw incredible improvement in her running. So much so, that by her senior year, she was running in major competitions like the Drake Relays, the BIG EAST Conference meet and the NCAA Track & Field Regional meet. Through it all though, Minagawa said the key is consistent training and a strong support system.

Her biggest supporter, Minagawa said, is none other than her twin sister and training partner, Minori. Both Minagawas ran at Ohio State and now run for the Columbus Running Company’s team, CRC Elite.

“I really appreciate all that the Columbus Running Company has done for me,” Minagawa said. “I don’t really have to buy that much running stuff and CRC helps with travel as well.”

Minagawa is able to save money thanks to her family’s support after moving home post-college and Rabbit Elite, a nationwide running company she runs for as well.

“I’m currently coached by Jim Jurcevich from CRC,” Minagawa said. “He keeps me accountable and is very flexible with all that I have to juggle.”

In May, Minagawa finished in 20th place (1:19:11) at the 2018 USATF Half Marathon Championships. Most recently, Minagawa competed at the USATF 10k Championships, but she has plenty of goals she’s still chasing.

“The big goal is to qualify for the 2020 Olympic Trials,” she said. “And I would like to run my first full marathon by the end of this year.”

That means more 5 a.m. runs, more strength training and more mileage. For Minagawa though, it’s worth it.

“A lot of people say they don’t know how I do it all,” she said. “Honestly, sometimes I can’t. Sometimes, I’m fine waking up super early and running, going to school and running again after school. And sometimes, it’s not easy. But if you love it, you’ll do it.”

She Became An Elite Runner After Turning 40

Meet The Elite: Our Q&A With Colleen Quigley

Advice For Time-Crunched Runners From Moms, Sub-Elites And Pros