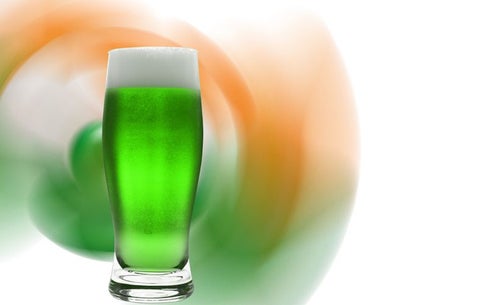 The Luck Of The Beer Mile

Like entering your first Tough Mudder or marathon, the beer mile is a bucket list item for many runners, who count beer as carbs and regard an ice-cold bottle as a post-run treat. As runners, we push ourselves to our limits, and if you want a healthy dose of masochism, bragging rights and insanity, look no further than a group of people running a beer mile.

The official rules are as follows: First, you chug at least 12 ounces of beer. Next, you run a quarter of a mile. Then you repeat the first two steps three times. If you spill the beer or vomit, you must run a penalty lap.

Figuring I had nothing to lose (except for my dignity), I signed up for my first beer mile. It would appropriately take place on St. Paddy’s Day.

I enlisted help from my pal Evangelin, who ran a beer mile last year. Admission: I was kind of freaking out.

The biggest time waster, according to Evangelin, is the chugging. “Your chug times make a big difference,” Evangelin said. “The faster you get the beer down, the better off you’ll be. The longer it takes, the more your body will be aware that you’re torturing it.”

She got her chugging down to 15 seconds, ran her mile in the sand (because, yeah, let’s make this even harder) and ended up having to do a penalty lap after getting sick.

As March 17 drew closer, I discovered Evangelin wasn’t the only person in my life who had experience running beer mile races.

“I had three beers first,” my cousin Heather informed me via text. She then ran her beer mile in 18 minutes. “I was pretty impressed with myself.”

Half of my family is Irish (hence my cousin’s impressive pre-race chugging), so I hoped all those bottoms-up holidays—albeit without running—must have somewhat prepared me for this race.

To get over my pre-beer mile jitters, I signed up for a 10K earlier that same day and ended up PRing and placing first. Success! A confidence-boosting race like that was helpful to have before my beer-chugging shenanigans ensued.

The beer mile took place at sundown. I stood with 100 other runners behind tables of Miller Lite. To my fellow beer snobs: if you want to run a beer mile, I wouldn’t recommend doing so with IPAs.

“You’re going to win,” said a man next to me. I shrugged and smiled sheepishly.

Could I win, though? I was victorious that morning at the 10K—why not go for it?

Once the horn blew, I tapped into my college days. Thankful I hadn’t drowned myself while drinking my first beer, I held my empty cup upside down above my head.

“Go!” a race volunteer shouted, pointing at me. I sprinted and downed each beer like miracle elixir. By the fourth lap, my sides began to cramp. Feeling gassy, dazed and hyper all at once, I zoomed with gusto to the finish.

“Second place female!” someone called as I ran under the arch. I released a dramatic belch.

I had come in just nine seconds behind the first woman. My dad, who did not partake in chugging or running, was beaming in the crowd.

Buzzed, I called and texted Evangelin and Heather, saying I was game to run with them for a second beer mile.

Whether it was the luck of the Irish or just dumb luck, I had finished my first beer mile in the upright position. And I didn’t publicly disgrace myself doing it.

How NOT To Run A Beer Mile

A Breakdown Of That Post-Race Beer And Alcohol Affects Running