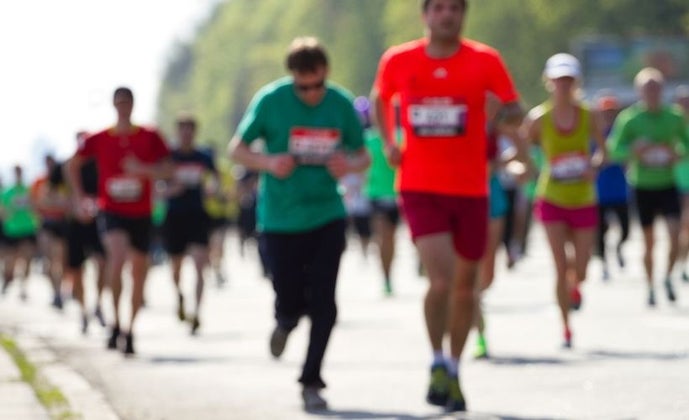 The hardest part of running a marathon, especially for the first time, isn’t necessarily the 26.2 miles of the race itself—it’s the grueling, 20-week training process runners need to complete just to get to the start line. But if you stick with it, something magical happens: Half marathons suddenly feel much easier to run, and the reason is both physical and mental.

The gains come from being out on the road or trail for mile after mile and hour after hour during marathon training, which is often two months longer than the typical half-marathon training plan. “The combined effect of these changes leads our mind and body to feel that ‘shorter’ distances are a breeze,” said Williams-Frank, who has been coaching for five years and focuses on helping runners increase mental toughness to perform their best.

Lindsay Clements, 27, of Normal, Ill., who has run one marathon and 15 half marathons, knows that feeling firsthand. When training for her marathon, “each long run over 13 miles felt like I was going to the dentist to have a root canal,” she said. “It was overwhelming to think that I was running distances that people drive to work.” But after successfully completing that 26.2 miles, something changed for Clements: She became an even stronger half-marathon runner and increased her long runs to 15 or 16 miles during half-marathon training. “To this day I speak to the importance of training past the goal race distance,” she said.

For Kristen Plumb, 37, from Birmingham, Mich., half marathons are “a piece of cake” compared to fulls, both physically and mentally. “I have done several half marathons without really training and still have finished feeling pretty decent. But I know there is no way I could run a full without the proper training,” said Plumb, who has been running for 15 years and has completed five marathons and 21 half marathons. “As for the mental aspect, two hours of running seems a lot less daunting than four hours of running. Once you have run a few marathons, going out for a two-hour run seems like nothing.”

That feeling makes sense because training for a marathon “helps the mind redefine [what is] difficult,” Williams-Frank said. “We start building mental strength simply by getting out there day after day, rain or shine. Plus, many of us run two to three hours or more every weekend during marathon training. This time spent running creates the metal fortitude it takes to run farther and farther at times when we don’t think we can take another step. Training for a marathon expands the mind’s capacity for discomfort.”

Elizabeth Syzdek, a fourth-grade teacher from Cheshire, Conn., who has run 21 marathons and 24 half marathons, said it’s those long runs of marathon training that build mental strength. “Mental toughness grows so much once you start marathon training. Running a marathon is hard and scary even after running 21 of them,” said Syzdek, who runs four or five marathons a year. “They don’t get easier, you just know what to expect. And knowing what to expect helps your mental toughness.”

A Half-Marathon Training Plan That Works For Every Runner

16 Weeks To A Marathon PR