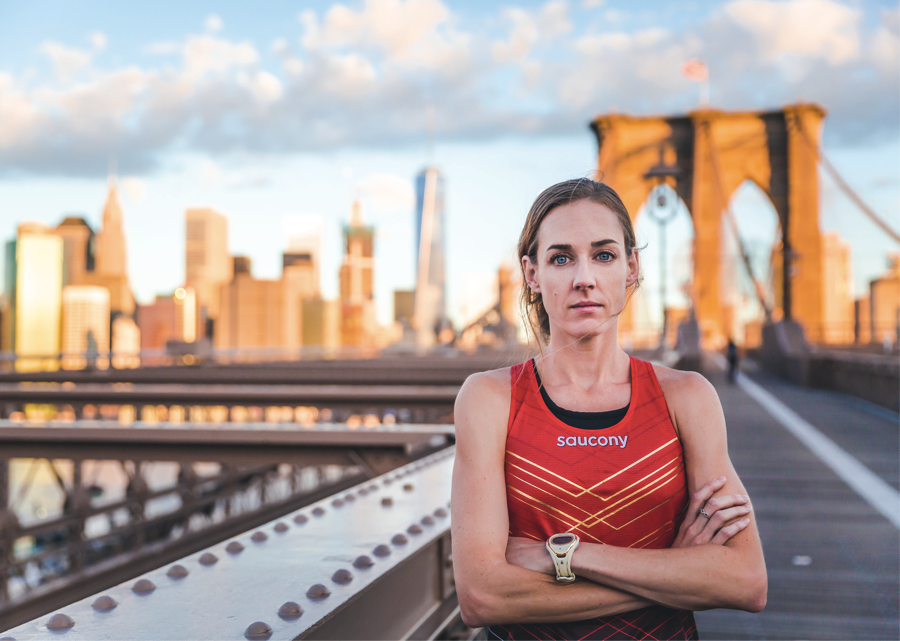 Molly Huddle is the two-time United Airlines NYC Half reigning champion, having defended her title at last year’s race in an event-record time of 1:07:41. In the smallest margin of victory in event history, Huddle broke the tape just one-tenth of a second before Kenya’s Joyce Chepkirui.

Huddle continued to have an amazing year, setting an American record at 10,000 meters in the Rio 2016 Olympics and taking third place in 2:28:13 in her marathon debut at the TCS New York City Marathon. Her finish was the highest of any American debut since Shalane Flanagan’s runner-up finish in 2010.

This year’s NYC Half is being heralded as “the best group of U.S athletes in the race’s history” by the New York Road Runners. By phone, I asked the recently anointed Gatorade Endurance Athlete what her thoughts are for this Sunday’s showdown:

“I feel physically comparable to this time last year. I’ve been training down in Phoenix so there have been no excuses [to not train] and I’m very healthy.”

Huddle admitted the pressure is on for her to win but she also feels a certain comfort level racing in New York City and, this course in particular:

“There is a familiarity of being in New York but I take it one mile at a time and not get too far ahead of myself. [Prior to the race] I will think back to the work I have done and try to simplify my thought process, so that when the gun goes off, I’m focused.”

Other pre-race rituals involve figuring out the weather (and if any changes need to be made with fuel or clothing) and debuting her now famous “race nails” nail polish designs on social media.

“Coming up with different designs takes my mind off racing. It’s my version of an adult coloring book.”

She will have a lot more race nail reveals throughout the year as she plans on doing the BAA 5K before returning to altitude training in an effort to once again qualify for Team USA in the 10,000 meters. Huddle also mentioned wanting to race the TCS New York City Marathon again, possibly in 2018, which is where being a part of the Gatorade Endurance Team will have it’s benefits.

The Gatorade Sport Science (GSS) Institute in Chicago, an elite only facility specializing in hydration and nutrition science, is where she plans to do some personal testing.

“I’m super excited to be working with the Gatorade team since my future will lie with the marathon. I plan on using the GSS lab to figure out sweat rate and how fast I burn carbs so I can get a handle on how much I need to take in before and during the race.”

Huddle believes having that kind of knowledge is where races can be won or lost, especially at high level events historically held in hot weather, like the World Championships and Olympic games.

“The marathon is an event where science is on your side, and if you figure it out, you can have an advantage.”

We look forward to watching Huddle figure it out this weekend and for years to come.

Molly Huddle Eyes A Return To The NYC Marathon Podium