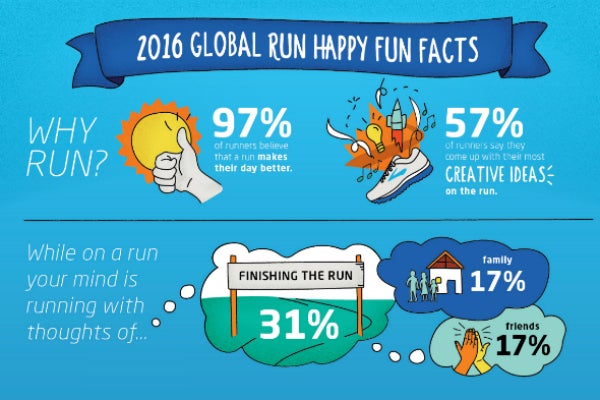 Ahead of Global Running Day, which takes place on June 1st, Brooks Running has released the results of their fourth annual Global Run Happy Report. The survey examines runners thoughts on the sport and how it intersects with other aspects of their life.

“Every year I look forward to the results…because they bring to life the transformational power of the run,” said Ann Cavassa, Chief Customer Experience Officer at Brooks Running.

Indeed, it should be no surprise that 97 percent of those polled said running makes their day better, but other results were fun and surprising. For example, 57 percent of runners come up with their most creative ideas while logging their miles.

For female runners, 30 percent said their greatest concern when running is lack of support from their sports bra. When they do find the right sports bra, 65 percent of woman would rather wear that than a regular bra. Nearly half of the runners surveyed globally said they would ditch their shirt and run only in their sports bra.

Related: The Best Sports Bras For DD Through F Cups

Some of the questions displayed runners’ humorous side. Thirty-five percent of runners shared that selfies are a must during any run. More than half of those surveyed said their dream relay team comprises athletes LeBron James, David Beckham, Kobe Bryant and Cristiano Ronaldo. And Brooks even asked people to compare their running to their intimacy style! Thirty-four percent admitted they are like a marathon in the bedroom—slow, steady and in it for the long haul, while 37 percent prefer an interval-style, with periods of high energy and breaks.

Find out how runners responded to even more questions in this fun survey on Brooks Running’s blog.