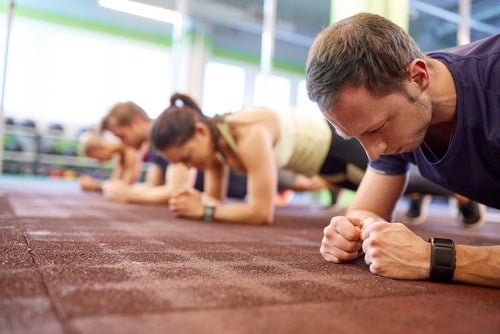 This story was originally published in 2015. The current record is 9 hours, 11 minutes.

For the average athlete, holding a plank for several minutes is hard, often impossible to start and will leave your entire middle screaming afterward. But core work is so important to fitness training, so it’s no surprise that planking has become a common post-workout ritual among runners of all levels, including high school athletes. Plank challenges have even become a thing, challenging athletes to build up to a 5-minute plank without taking any breaks.

One runner—59-year-old George Hood—took his planking to an entirely higher level, however. The guy—let’s call him Superman—held a plank for a record-shattering 5 hours, 15 minutes and 15 seconds. This real-life stunt the previous Guinness World Record of 4:26.

This is not the first record Hood has broken, however. He held the same record previous with a 4:01 hold, set in June 2014. In addition to breaking records for planking, Hood’s world record debut was in 1986 when he skipped rope for 13 hours.

Related: A Simple Way To Take Planking To The Next Level

A former Marine officer and retired Drug Enforcement Administration (DEA) agent, Hood is now a personal trainer and group exercise instructor. He spent nine months training for this new record-breaking attempt, including 4 to 6 hours of daily activity and 30 hours(!) in the plank position each week. In all, he estimates that he logged more than 1,000 hours of plank time. And because that’s not impressive enough, Hood consistently trained with 20- to 40-pound weights on his back. Animal!

Hood was surrounded by a whole crew at the Junior Seau Amphitheatre in Oceanside, Calif., just north of San Diego, during his more-than-5-hours excursion. He said that everyone provided visual distractions and encouragement, helping to keep him motivated.

The challenge was deemed “The People’s Plank”—it doubled as a fundraiser to benefit the Semper Fi Fund for injured United States Service members. Not only did he continue with the planking in an effort to break the record he previously held, but he also hoped to inspire others worldwide to make fitness a priority in their own lives—and most importantly to make people think of all of the service members, giving so much in the fight for freedom.