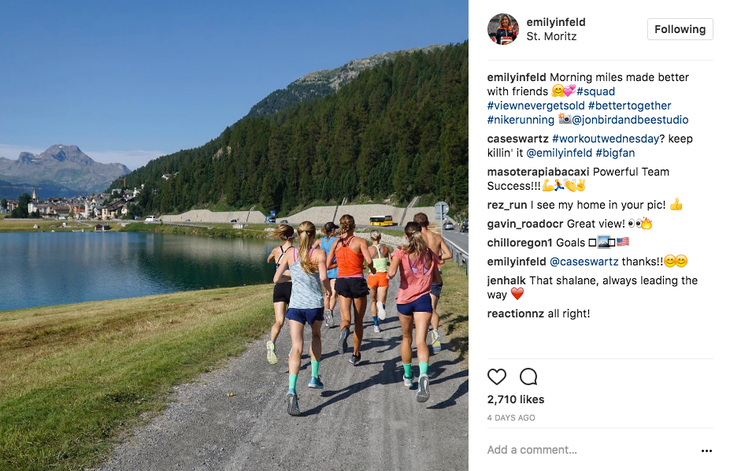 In case you missed it, the Bowerman Track Club (BTC)—aka “Bowerman Babes”—have been avid Bachelor/Bachelorette viewers for a few years now. Emily Infeld, who will represent Team USA at the world championships in London next month, says it started in 2013.

“The Bachelor/Bachelorette always seem to have a season when we’re training at altitude. It started in Park City, [Utah], in 2013—Sammy [Silva] and [I] were die hard fans and slowly everyone got sucked in to loving it!”

Shelby Houlihan and Colleen Quigley, both also preparing to run for Team USA in London next month, jumped on the bandwagon in 2016, with bachelor Ben Higgins season. “Most of us liked Ben Higgins’ season the best! He seemed so genuine and kind-hearted,” says Infeld. “He was just goofy and a real person and tugged at our heart strings a bit.”

Courtney Frerichs, however, says the current bachelorette, Rachel Lindsay, is her favorite because “she’s smart and a genuine person—and sassy.”

The tracksters enjoy homemade pizza as part of the weekly tradition during the season, and they’ve been known to even dapple in the bracket situation of selecting favorite contestants in the past. However, this season, as bachelorette Rachel navigates her heart through the final three during ‘fantasy suites,’ the entire track club is rooting for the same guy—Peter.

“He is definitely our favorite…but we might be biased because he’s a BTC fan!” (Who knew?!)

Infeld even says there are recovery benefits attached to having such a solid tradition among a tight-knit group of runners “It’s a form of entertainment we look forward to that’s not strenuous. Training can be super repetitive, and it’s nice to have something outside of running to focus on and break up the weeks. It unites us as a team by giving us countless laughs and inside jokes. We always have a good conversation topic for runs the next day! It keeps the mood lighthearted when we’re in a tough training grind.”

And yes, Shalane Flanagan has also been tuning in since 2013. But will their Peter prediction be correct?

How to Watch the USATF Outdoor Championships