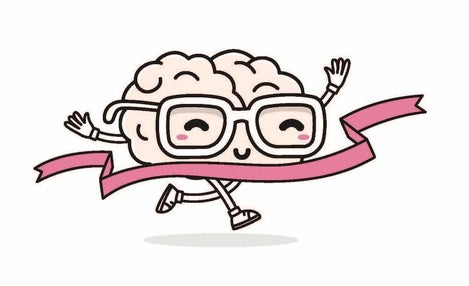 Excerpted from Running Is My Therapy: Relieve Stress and Anxiety, Fight Depression, Ditch Bad Habits, and Live Happier © Scott Douglas, 2018. Reprinted by permission of the publisher, The Experiment. Available wherever books are sold.

In my early days of running, I discovered (and reveled in) its effects on my mood. It was amazing to leave the house and return just 30 minutes later feeling more energetic, optimistic, engaged and happy. And doing so didn’t require talking my brother into buying me beer! That immediate and dependable boost in mood is one of running’s great attractions, regardless of your mental health. Short-term relief is especially captivating for runners with depression.

But where running really helps with depression is over time, thanks to changes in brain structure. According to Panteleimon Ekkekakis, Ph.D., a researcher and professor of exercise psychology at Iowa State University, regular running produces the same two changes that are thought to be responsible for the effectiveness of modern antidepressants: increased levels of the neurotransmitters serotonin and norepinephrine, and neurogenesis—the creation of new brain cells. As Laura Fredendall, Psy.D., a clinical psychologist and runner from Terre Haute, Ind., says, “The daily hits matter, but over time there’s a cumulative effect. You’re actually building a healthier brain, and a healthier brain’s going to feel better.”

Much of this change happens in the hippocampus, an area of the brain that’s often shrunken in people with depression. According to Ekkekakis, “MRI scans have shown that even after a six-month exercise intervention, there’s a visible increase in the size of the hippocampus.” (Reinforcing the uncertainty about the causes of depression, Ekkekakis says, “The hippocampus is primarily involved in memory. We don’t understand why growth in an area of the brain that appears to be involved with memory would somehow contribute to an antidepressant effect, but there seems to be a link.”)

That regular running causes structural changes in the brain is the most important thing I learned writing this book. It makes sense once you think about it: Why wouldn’t there be noticeable differences over time in the brain, in the same way that a chest X-ray shows that the left ventricle of my heart has enlarged over decades of running? But growing the brain by running isn’t something you often hear about. Discussions of its mental-health benefits tend to focus on day-to-day effects, implying that using running to manage depression is a Sisyphean task that starts from scratch with each sunrise. Research says otherwise: Running produces neurogenesis and neuroplasticity (improvements in the brain’s internal communications network).

Neurogenesis and neuroplasticity appear to occur primarily due to brain-derived neurotrophic factor, a protein. (Trophic, in this context, means promoting survival and growth of the brain cells known as neurons.) Brain-
derived neurotrophic factor (BDNF) is often called the Miracle-Gro of the brain. “It helps neurons fire and wire together,” Fredendall says. The hippocampus, with its mysterious link to depression, is a key area of BDNF activity. Increased levels of BDNF appear to encourage both new growth and better functioning of existing neurons that are involved in serotonergic transmission. Again, this mechanism of increasing the availability of neurotransmitters, such as serotonin, is exactly what modern antidepressants aim to achieve.

BDNF levels sharply increase after any given workout—or more accurately, after any aerobic workout, such as running. Most research hasn’t found that activities such as strength training boost BDNF levels. This acute increase in BDNF levels during a run is part of why you can almost guarantee you’ll return from a run in a better mood. But where we runners really get help is over time. People who exercise regularly have greater BDNF increases per workout than less committed exercisers. For each run, you get more of the good stuff. Your other reward for regularity: There’s research indicating that frequent exercisers have higher BDNF levels at rest than do sedentary people. So, even when you’re not running, the fact that you do so regularly is bettering your brain.

The Reason Why Our Best Ideas Come While Running