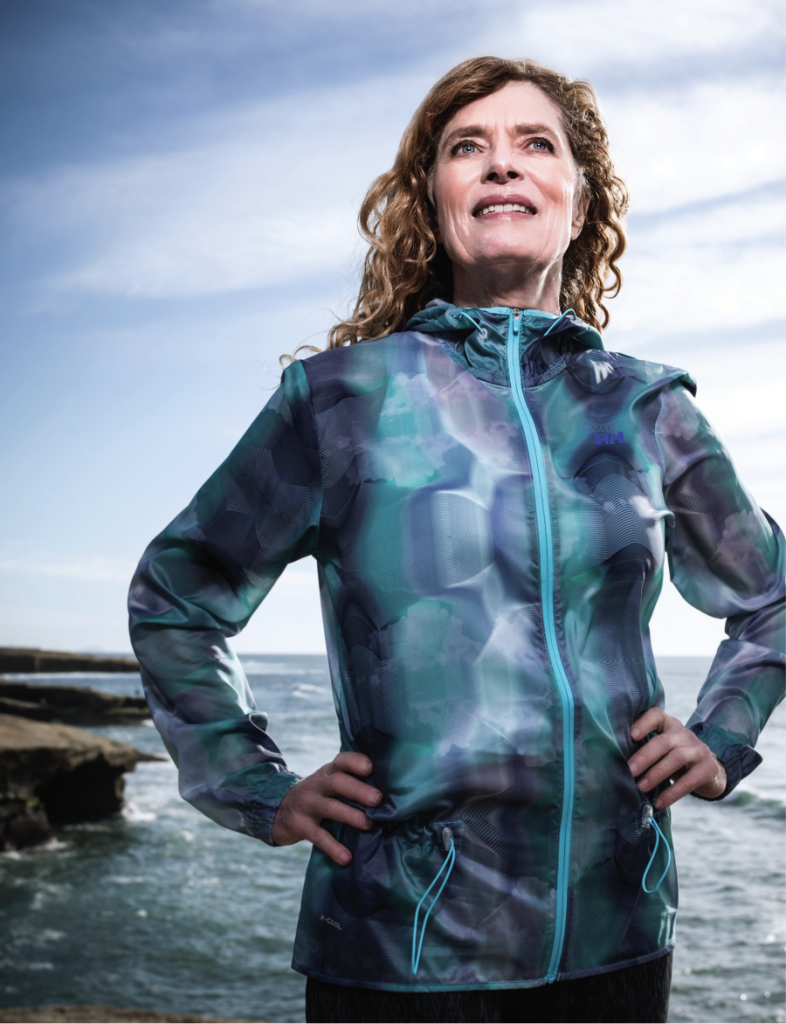 The 2016 Boston Marathon Marks the 50th anniversary of the moment trailblazer Bobbi Gibb—decked in a bathing suit and Bermuda shorts—turned right on Hereford and left on Boylston to be the very first woman to ever finish the race.

If you have ever considered running a marathon, you understand how daunting this proposition can be. First-time questions flood your brain: How do I start? What plan should I use? Do I need to change my diet?

Now imagine you would like to train for a marathon—but answers to your queries are impossible to fi nd. There is no Internet to search for training plans; there is no running store to ask for tips; there are no race nutrition books available. Furthermore, the biggest question isn’t whether you will finish, but quite literally: If you try, will you survive?

This is the scenario Bobbi Gibb faced when she made up her mind in 1964 to run the Boston Marathon. At the time, prevailing wisdom was that if a female attempted to cover this distance, she would likely die in the process. But Gibb harbored an unshakable self-belief—and she knew she had to try. In her own words, here is Gibb’s incredible story of her two-year journey—one that took her across the country and back again before she became the very first woman to cross the Boston Marathon’s finish line.

I always loved to run even as a little kid—I would just take o across a green field. Sometimes, I used to go up in the woods and run with the neighborhood dogs. I loved the sense of running, one foot in front of the other, on this earth. When I run, I feel alive and part of the universe.

The father of a friend of mine told me about the Boston Marathon. Since we lived in the suburbs in Massachusetts, I went out there in 1964 with my dad. I saw the marathon and I just fell in love with it. I didn’t know women weren’t allowed. In fact I didn’t know it was an athletic event. I thought it was just a group of men who got together in Hopkinton and ran to Boston to celebrate the spring and celebrate life. I wanted to be part of it.

The very next day, I started to train, but I didn’t know if I could do it, or if my heart would hold up. It was totally outside of the social norm for a woman to be running in those days. There was no running movement— not even men ran. [Gibb was 21 at the time and 23 when she ran Boston.] I would just try to run further and further distances. My boyfriend would drive me on his motorcycle. We would measure the miles out and then I would run home. That summer, my parents were on sabbatical in England, so I took the family’s Volkswagen camper and my malamute puppy and headed west.

During the days, I ran wherever I was—West Virginia, Ohio, all across the Mississippi. At night, I slept under the stars in my bedroll, immersed in the universe. When I got out into the Rocky Mountains and Nevada, I would find a blue peak in the distance and see if I could run to the top and back. I was getting stronger and stronger. When I got to San Francisco, I jumped into the Pacific Ocean. That was my main training for the Boston Marathon.

In those days, if you were a woman and you were lucky enough to go to college [Gibb attended Tufts University School of Special Studies], you were expected to get engaged your senior year and then get married. There was no way for women to support themselves economically. Women couldn’t own a house; they couldn’t get a mortgage; they couldn’t get a credit card. There were no opportunities for women to manifest their ability.

My mother was beautiful and intelligent, and I could see what it had done to her and all of her  friends. A lot of them were on tranquilizers and were drinking too much wine in the afternoon to dull the pain of an unfulfilled life. I wanted to be married and have children—but that’s not all. I wanted to use my mind and my body.

Part of what I was doing with running was getting away from all of that, finding a kind of freedom I didn’t have in society. I knew I wasn’t going to change, so the world had to change.

I didn’t know that my running was going to be a social statement until February of 1966. I wrote for my application [to the Boston Marathon] and they wrote back saying, “Women are not physiologically able to run a marathon, and we can’t take the liability.” [At the time, races longer than 1.5 miles were not sanctioned by the Amateur Athletic Union.]

But when I read the letter, I thought, Aha! This is a chink in the armor. If I can prove that this is a mistaken belief about women, it’s going to open up the whole question of what else we think women can’t do. What other false beliefs are keeping us imprisoned?

I was living in San Diego so took the bus to Boston, four days and three nights, and got there the day before the race. I hadn’t shared any of my plans with my parents, so when I told them, they thought I had gone nuts. My father was really angry. He thought I would hurt myself or possibly die. But I said to my mom: “This is really going to change things for women.” For the first time in her life, instead of trying to get me to conform to these horrible norms, she was on my side. She drove me to the start.

When I got to the start line, I knew the most important thing was that I not be stopped. I was afraid I might be arrested or dragged off the course. I had a blue hooded sweatshirt pulled up over my head with my hair tied back. I was wearing my brother’s Bermuda shorts and a black bathing suit, which is what I used for underwear before there were jog bras.

I found a clump of bushes close to the start, and I could see the men were gathering. There was the bang, but I waited until about half the pack left—then I jumped in. Even though I was disguised, the other runners figured out very quickly that I was a woman.

They could have shouldered me out and been hostile, but they were very positive and supportive. I told them that I was afraid if [spectators or officials] saw that I was a woman, they’d throw me out. But the runners said, “We won’t let that happen. It’s a free road.” That’s when I took off the hooded sweatshirt and everyone could see I was a woman.

People went crazy. They started yelling and clapping: “Way to go, girlie!” The reporters started picking up on it and it started being broadcast on the local radio station. When I got to Wellesley College, I could hear these screams in the distance. It sounded like a day at the beach. When the women saw me they screamed and screeched. One woman over at the side was shouting, “Ave Maria!” I really felt as though this was freeing women, that there was a whole new horizon opening up.

I ran into Boston. Up until the last 3 miles, I was at a sub- 3-hour pace. I didn’t know you were supposed to drink water, so I hadn’t. My feet were killing me, because I wasn’t used to the hard surface, so I kind of tiptoed in. [Gibb still finished in a fast 3 hours, 21 minutes, beating more than half of the field.]

When I turned onto Boylston, a roar went up from the crowd. I went across the finish line and the governor of Massachusetts came down and shook my hand. I took a taxi home to my parents’ house and there were cars up and down the street. I thought, Oh, somebody’s having a party. Then I realized it was for my house—this was the press. My poor parents were standing there in the middle of all this. And my dad was so funny. He put his arm around me and he said, “We knew she could do it!” That really was fun.

I think it was a pivotal event in changing the perception of women. Afterward, I got a lot of phone calls from women saying, “I ran around the block today and I felt so free.” To be able to run from where you are to where you want to get to, using your own sense of direction, is something a lot of women had never tried before. They were experimenting with reclaiming their own sense of autonomy.

As women found out they could do more things, they gained credibility and self confidence— so the laws had to change. The AAU rule that barred women from running more than a mile and a half was changed in 1972. That was a huge step forward, and then there was Title IX.

I went back to Boston and ran again in 1967 and 1968. I hope to be an example of someone who follows what they love and what they’re good at. I think everyone came to this world to give something. I’ve always been conscious that we have a very limited time here. I feel so blessed to have this  life. I hope that I can help to free other people to follow what they love, to love one another and to get through the kind of hatred we see tearing the world apart.

Of course, Gibb’s story doesn’t end with a marathon finish. After her victory in Boston, she went on to attend law school and practiced for nearly 20 years. She also studied neuroscience and was a research assistant at MIT. Currently, Gibb works in the field of neurodegenerative diseases in an effort to find a cure for ALS. She also creates abstract paintings and lifelike sculptures inspired by athletes. Joan Benoit Samuelson keeps a sculpture Gibb created to mark her victory in the 1984 Olympic Marathon displayed in her home. Visit bobbigibbart.com to learn more.

RELATED: Come Run With Tracksmith, Bobbi Gibb And Us In Boston