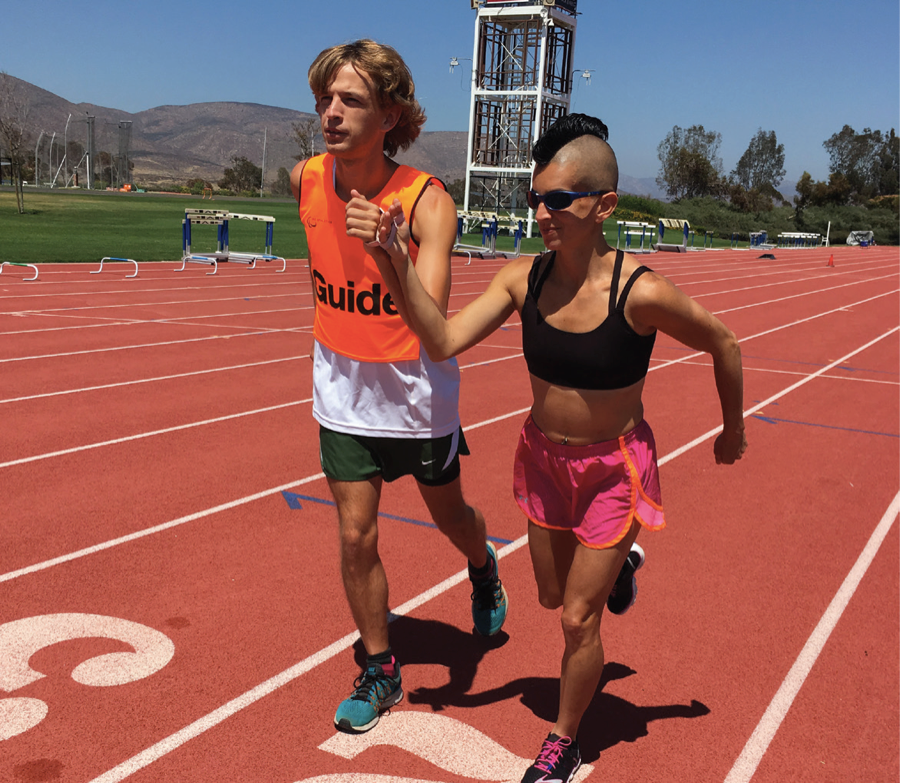 Diagnosed with a disease that required my eyes to be removed as a baby, I have always navigated life as a totally blind woman. After graduating from Stanford University, I moved to New York City. Craving outdoor adventure, I joined the New York Road Runners club, where I was introduced to running with a guide. It didn’t take long to fall in love with running, and before I knew it, I was winning long-distance races, including the visually impaired division of the Boston Marathon.

I competed in paratriathlon racing for several years before learning about the Paralympic Games. I was disappointed when paratriathlon wasn’t voted into official competition for 2012. During this time, my doctors discovered I had skin cancer that I eventually had removed and later received topical chemotherapy.

Returning to the drawing board, I met my current coach, former Olympian Joaquim Cruz, who offered to train me for the 1,500 meters and marathon leading up to the 2016 games. Feeling like the pieces of my puzzle were falling into place, I moved to California and began training.

Things were progressing well until May of 2014, when I was diagnosed with bladder cancer. I underwent surgeries and chemotherapy to fight off my third bout of cancer.

Giving up would have been easy, but I wasn’t willing to kiss my Paralympic dreams goodbye. Though the recovery time made training for the marathon event impossible, I was still able to pursue the 1,500-meter race.

I chose where I would attempt to qualify for the trials—everything was riding on this single race. At the start line, I reflected on the moments that led me to this point. As a blind runner, there are nuances to each track that my senses pick up on in the absence of sight. Not only was I hoping to test my legs, but I wanted to record every tiny detail of the race.

Tethered to my guide, Kyle, we took off at the sound of the computerized gun. After fighting through the usual congestion of runners for the first 200 meters, the field opened up, allowing us to settle into our position near the front of the pack. Listening to Kyle, I held my goal pace and hit my targets at the 800-, 1,000- and 1,200-meter spots. We pushed the pace for the last 300 meters, earning second overall with a time of 4:57:68.

Even though I was in shape to make the qualifying time, I didn’t want to entertain the thought prior to the finish. It was only after I crossed that I allowed myself to celebrate victory, knowing a chance to compete at the Paralympic Games was one step closer.

Running taught me to always pursue my passion. If one person watching me is inspired to chase the thing that makes her heart beat, then my journey will be rewarded.

Meet the Elite: Our Q&A with Mary Kate Callahan