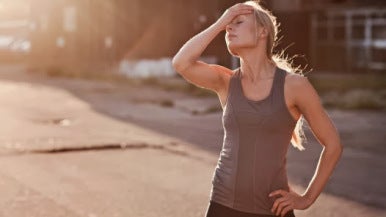 Republished with permission of Allie Burdick at Vita Train 4 Life

If you have been running and racing for any length of time, you have probably experienced the worst race day ever. Possibly two. There are just so many factors out of a runner’s control, coupled with the fact of having just one day to race, after what was most likely months of training.

I’ve been running for more than 15 years now and have had my share of horrible races. Mostly the weather has had something to do with it but there was also that one time when I followed the lead pack and went the wrong way in a 5K race, when I was the first woman. It wasn’t pretty.

Because misery loves company, I took to social media to ask all my runner friends to share their horrific racing stories. I was not disappointed but I was truly shocked that some of them not only survived the races they described but, had the cojones to lace up and race again! Runners are a tough bunch.

Here are the most common reasons horrendous races happen and, how you can avoid making the same mistakes we did:

Perhaps someday runners will realize their ultimate collective dream and be able to control the weather. Every race day will be set for partly cloudy skies and 45 degrees, and we will PR every time! Ok, so that will probably never happen. It certainly did not happen when I ran my first ever marathon in pouring, driving rain and it absolutely did not happen when I ran Boston for the first time in 2007 when they almost canceled the race because of a nor’easter.

This is what happens when the weather screws with your race day:

“I’m with you on Boston in the Nor’easter 2007 baby!! That was my first and only marathon…I basically ran in a plastic suit trying to keep dry….it was 30* at the finish…my feet felt like they were broken….but boy was that finish line sweet!!!  —Nancy C.

Basically, you can’t. The only thing you can do is get out there in the bad weather during your training and try to prepare for it. As inviting as the treadmill may look on a cold, windy, wet day, as long as it’s safe to be outside – get out there! You will feel so much more confident staring down a start line in the pouring rain/sleet/wind, knowing you have done it before. Plus, it makes you feel like a total badass…until you crumple into a ball, weeping at the finish. But hey, the story!

If there is one thing I have learned over the years it’s that you cannot practice your pre-race, on the run, and post-race fueling enough!

The race start time, location (time zone, etc) and distance all factor in and, sometimes the best laid plans can go down the shitter. Pun so intended.

“As my husband called my name at the finish line of my one and only 26.2, I started spontaneously vomiting after feeling like crap for 20 miles. (My coach even tried to get me to bow at at mile 7 or 8). I was taken to the medical tent in a wheelchair, laid out with ice all over and all I thought was, “Can I run the race now?” I finally felt better.” —Melissa B.

Practice your food intake before, during and after the race. I cannot stress this enough. However, sometimes you practice and everything feels good and then the day of the race, it doesn’t. Race day nerves come into play and mess with your stomach, sometimes the temperature spikes and nothing will sit right but, most often if you eat exactly what you planned on eating on race day, things will go right.

It is also key to eat a mostly bland dinner the night before. You don’t need to carb load but don’t try the new Thai food place either.

The golden rule in all of racing is this: NOTHING NEW ON RACE DAY—and it goes for food and clothing.

This is probably one of the worst things to have happen during a goal race. Training for months on end can lead to a breakdown of almost any body part. If you enter the race already injured and hope for the best, at least you’re aware of the issue. Sometimes a very unexpected injury can pop-up at precisely the wrong moment:

“I sprained my foot at mile 22 of my first marathon—2012 Chicago and limped to the finish on my heel.”

“…it actually turned out wonderful because I was able to stop and really see the course and people around me instead of focusing on the distance. The after pain was bad but some wine did the trick for the night lol ended up in a boot for November and did goofy that January where it got to 96F the last 6 miles of my second full.” —Lisa L.

Some injuries seemingly come from nowhere and are obviously harder to treat. However, if something hurts, you should pay attention to it immediately. Mostly injuries are due to imbalances or weaknesses we all have and are most likely in the hip, glute and low back area. Pay attention to strength training these areas and see a specialist at the first sign of injury to increase your chances of correcting it prior to race day.

And, I don’t think I need to write this but you should absolutely train for the distance you plan on racing, unless of course, they change it on you on race day:

“My worst race was my first tri. Getting trained for the 5k run was a challenge for me, but I showed up nervous but ready. Arrived race setup to see a sign posted that due to bacterial content in the water, the race would instead be a run/bike/run. If I hadn’t had two friends doing it with me I would have turned around and gone home. Wound up walking a chunk of of the second 5k but finished.” —Stacey N.

As we now know, things do not always go according to plan on race day but, so much can be done to avoid crashing and burning.

You may have noticed that most of these “worst” race day stories end happily or with a sense of it all being worth it. By virtue of doing what we do—running a ridiculous amount of miles—we want to be challenged and, by the time we cross that start line, we are ready for anything!