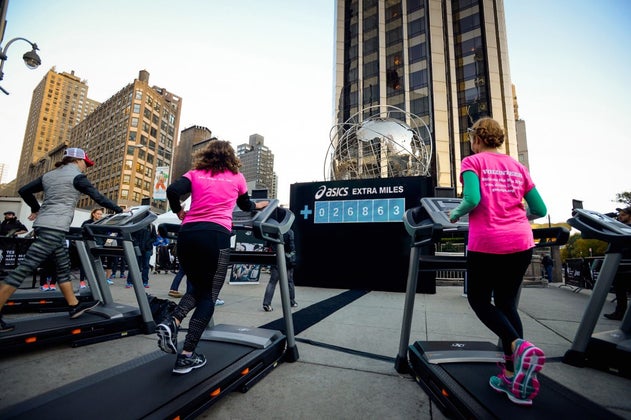 Back in early November, Central Park was full of runners shaking out their excited legs in preparation for the New York City Marathon. Joggers could enjoy the foliage-filled pathways if they wished—but they  also had the option of grinding out some miles on open-air treadmills in the middle of Columbus Circle.

Why would anyone hop on a treadmill in front of sidewalks full of gawking pedestrians, you ask? One very good reason: ASICS, the official footwear and apparel sponsor of the New York City Marathon, set up a handful of machines to support the nonprofit Girls on the Run (GOTR). Dubbed the Extra Mile campaign, for every mile logged on the ‘mill, the shoe brand  donated a pair of sneakers to a girl in need.

Girls on the Run is a nationwide organization that helps girls ages 8 to 13 find confidence, strength and healthy habits through running programs. Founded in 1995, the charity has impacted more than 1 million lives—and has an ambitious goal to aid 1 million more by 2020.

For a limited time, Extra Mile will helped GOTR push toward that goal. Runners in New York could head to the south entrance of Central Park and hop on the treadmill. But runners everywhere has the opportunity to make a difference by running just 4 miles using the Runkeeper app. The idea is that since average Runkeeper workout is 3 miles, users could push themselves to finish one more for a good cause. For anyone who completed this run from October 13th through November 30th, ASICS  donated a pair of shoes to GOTR. Runners could   also earn a pair for a GOTR girl by spending more than $100 dollars at select ASICS retail location.

UPDATE: ASICS announced today that the campaign generated a total donation for more than $1.5 million worth of shoes. That means 50,000 girls around the country will have the footwear they need to chase after their dreams.

Even elite hurdler/bobsled athlete Lolo Jones got in on the fun. Jones, who battled periods of homelessness during childhood said,  “Someone gave me my first pair of running shoes, and I understand the huge impact this can have for a young girl. Having the opportunity to work with ASICS and Girls on the Run to give back and empower today’s kids is something that really comes full circle for me.”