The Toughest 6-Year-Old Runner Around

Angela Cortez already has a few 5K races and a half marathon under her belt. Now, she’s gearing up this fall for a couple of Tough Mudders, the Dallas Ultra Beast Spartan Run and Rock ‘n’ Roll San Antonio.

But there’s a catch. Angela is only 6 years old. Javier Rosas, her trainer at Beast Fitness in San Antonio, gets raised eyebrows about her age all the time. “I wouldn’t be doing this if she wasn’t driving it,” he said. “She wants to win.”

What’s driving the urge for a shiny medal? Angela’s aunt won a race a few years ago. When she saw her aunt receiving her award onstage, Angela wanted to know how she could get one of those medals for herself. That’s when this little girl started training hard.

We checked in with Angela last year while she was training for her first half marathon. Angela’s time has definitely improved since then—her record so far for a 5K is 28:30.00.

The newest additions to her racing lineup are mud runs. Rosas tends to work on stamina and distance, adding strength training as they get closer to obstacle races. But in the end, it’s Angela who drives how their sessions go.

“I don’t push her to be fast, I just want her to finish,” Rosas said. “She’s the one pushing it based on what she wants to do.” 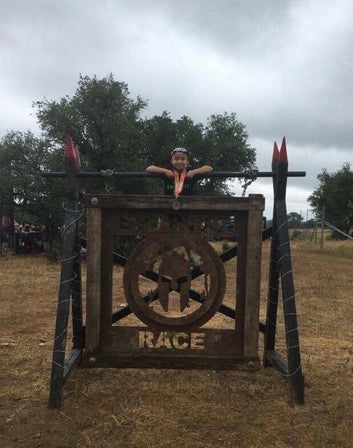 Rosas said it’s rare that Angela doesn’t feel like training. But when that does occasionally happen, he reminds Angela of what her goal is and how close the race is. After a short pep talk, Angela is back on track in no time.

Most runners won’t question who trains or how they train. That’s a personal decision. For those that don’t run, they have difficulty understanding why Rosas works with Angela. In fact, he doesn’t train other kids—he only trains Angela. Yet people have told him they think it is abusive to make a small child run 26 miles. Her mom, Siomara Moreno, also mentioned that people complain to her about Angela’s running. They think she’s crazy to let her daughter do this. One woman once approached Rosas during a race and asked what Angela was doing there, saying there should be an age limit for races.

“If I see she can’t do it, I will stop her,” he told the woman. “My concern is for her and doing what’s best for her.”

Angela is often standing next to kids twice her age at the starting line—and she outpaces them.

“You’ll see a 10-year-old next to her and she’s the youngest one,” Rosas explained. “But most kids don’t run that much like Angela does. She just smokes ’em.”

So how does Angela feel about all this?

“I run because I like winning,” she said. “It’s fun and you only get better.”

Angela likes 5Ks the best, but she also likes running marathons. As she put it, marathons are a little wild, and sometimes she can run faster because she’s got more distance to increase her speed if she feels like it.

“When you sign your kids up for a sport or a class, they’re there because you took them,” Rosas said. “This was her decision to start running. For her, this isn’t work. She’s just having fun!”

Between September and December this year, Angela will have six more races under her belt. Sometimes, it’s the littlest feet that make the biggest footprints. 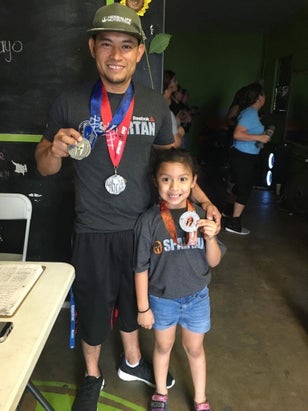 Ask The Coach: When Can My Kids Start Running?

How To Inspire A Little Runner Within Your Kids