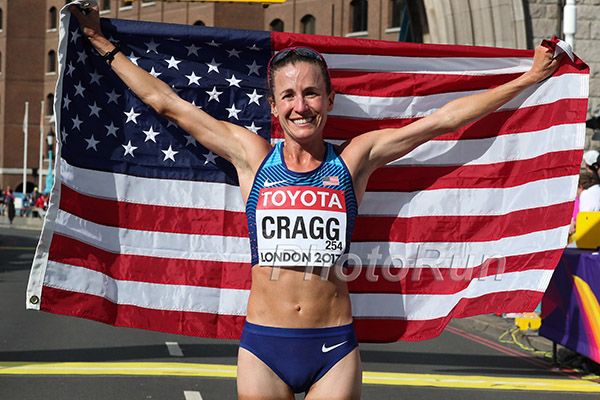 Amy Cragg quite literally stormed her way from an almost-distant fourth place into third at the line, capturing the first medal by an American woman in the marathon on the world stage since 1983. Say that three times fast.

She captured the bronze medal in a season’s best time of 2 hours, 27 minutes, 18 seconds. She clocked the same time as second place Edna Kiplagat and was only seven seconds off winner Rose Chelimo.

“I knew I would remember it forever, the point that made the race go good or go bad,” Cragg says about those final steps into history. “The pain was worth it to try and hopefully make the race go in my favor.”

She knew she was in the best shape of her life going into the marathon and that there was potential to do something special with such a deep field of talented runners. However, snagging a medal wasn’t necessarily her first thought; with a group that included Olympic bronze medalist and reigning world champion Mare Dibaba, a top-10 finish felt like a good day. And likening the majority of the race to a “jog” up until 35K meant that final 5K was going to be hammer time.

“I knew very early on it was going to be a slow race with a strong finish,” explains Cragg. “However, at 20K I was like, Okay, now it’s going to go. And it didn’t go. And at 25K I was waiting and it still didn’t go. It was kind of crazy that people waited so long [to make moves].”

Having so much support that she could see and hear along the course made those key 3.1 miles easier (if that’s even the best word) to navigate. Cragg’s coach, Jerry Schumacher, and husband Alistair were among the many cheering the 2016 Olympian on along the streets of London.

“There was one point where I was in fourth and I was falling back even more, and Jerry was like, ‘Amy, if you can stay in contact with her, if you can just get a little closer to her, you will get her in the last 800 meters,'” remembers Cragg. “And that was the point I was going to remember in this race. Whether I fight and dig deeper right now, or whether I give up at this point. This is that turning point in the race, where I decided to dig deeper.”

She dug deep enough to cross the line in an epic, inspirational third place, earning every single stripe and star on that American flag she draped around her shoulders, reminiscent of her tremendous victory at the Olympic Trials Marathon last year. Having now raced a marathon on two world stages between Rio and London, Cragg feels that she was “able to do more this year than I would in 2012,” the year she missed the Olympic marathon team as it headed to London. It’s almost like a serendipitous full circle that this world championship gave Cragg the opportunity to compete in London.

With training partner Shalane Flanagan recovering from injury—she scratched from the Boston Marathon earlier this year—Cragg had her husband pacing most of her long runs. But she did miss the social aspect of running with Flanagan, since something as intense as preparing for 26.2 miles doesn’t allow for much activity outside of running and resting.

“I was able to train with [Shalane] a little bit right before I left for altitude training. Her first couple of workouts were my last couple of workouts right before I left. So we did overlap a tiny bit,” explains Cragg. “Normally that’s the social part of my day, where I meet a friend and go run.” She laughs, adding, “She better stay healthy now because I really want her back! I really look forward to training with her again. She’s tearing it up right now.”

Flanagan, like dozens of other elites, tweeted her congratulations to her speedy teammate:

Cragg’s outstanding race was for so many of us what running is all about—digging so deep that it hurts the worst, but it feels the best to give that intense of an effort. When it comes down to the wire like that, it’s almost visible to the spectator that you stop running with your legs and start pulling yourself through from your heartstrings. And the emotions that poured off her cheeks and onto the flag proved that to be 100 percent true.