Update: Women’s Running went to press with the Olympic issue prior to the U.S. Olympic Track and Field Trials. Allyson Felix did not qualify for Rio in the 200-meter final at the Olympic Track Trials on July 10, missing the qualifying spot by 0.01 seconds. She finished second in the 400 meters in Rio.

You know you’re kind of a big deal when both the International Olympic Committee (IOC) and International Association of Athletics Federations (IAAF) modify the schedule at the 2016 Rio Summer Games just for you. Though American sprinter and four-time Olympic gold medalist Allyson Felix is too gracious and humble to confirm that it was largely for her benefit, there’s much speculation that USA Track and Field (USATF) petitioned for a time change to allow Felix to defend her gold in the 200 meters and add a new event, the 400 meters, to her Olympic agenda.

Allyson Felix’s goal? To pull off a historic quadruple victory, starting with a double gold. After clocking a title-clinching 49.26 seconds in the 400 at the 2015 IAAF World Championships in Beijing and dominating in the 200 meters for years (her best time is 21.69 seconds), the 30-year-old California native hopes to become the second American female to win gold in both events in Rio (the first being Valerie Brisco-Hooks in 1984). Felix also wants to bring home two more golds in the relays (4×100 and 4×400 meters). Only one other female runner has secured quadruple gold from one Olympic Games, but soon Felix may join 1948’s Fanny Blankers-Koen in this impressive feat—that is, if she’s given the chance.

“Over the last few years, as I branched out to the 400-meter event, I was able to show that I could do both. In the past, people were able to compete in both events at the Olympics without them overlapping,” Felix explains. A full day off between events to recover would be ideal, she adds. But this wasn’t the case for the Rio Olympics—not at first. The initial plan was to have a short 75-minute break between the two events on Aug. 15, making it nearly impossible for anyone to compete at their full potential in both races.

“I let my coach, Bobby Kersee, talk to USA Track and Field [in order to request a scheduling shift] on my behalf,” says Felix, who began training for the 400 soon after picking up three golds in London (in the 200 meters and 4×100 and 4×400 relays). She had no idea whether competing in both individual events would be feasible, but it was a risk she was willing to take. With three consecutive Olympics under her belt (Athens, Beijing and London) and six Olympic medals in total, Allyson Felix says it made sense to try something new for her fourth summer games.

“I’m excited to challenge myself. Part of it is getting out of my comfort zone. I’ve been comfortable running the 200 since I first started running track [my freshman year at Los Angeles Baptist High School]. To do the 400 is something that’s not easy for me. It’s a whole new world,” says Felix.

After adding the distance to her docket, she boosted her tempo days on the track by up to two additional miles per session. Though her body has adjusted to the added volume over time, it has been a hard transition, mentally and physically. “It’s not like a pure sprint, where you can have fun with it. It’s a strategic and endurance race. I’m at a point now that I’ve learned to embrace pushing myself in these different areas.”

It’s a good thing she trained for the back-to-back events: In mid-January, USATF CEO Max Siegel announced in a statement that the schedule had been shifted to allow athletes like Felix to compete in the preliminary round for the 200 meters on the morning of Aug. 15 followed by the 400-meter finals that evening. “We worked closely with Allyson Felix and her team to advocate for this change, which will help elevate the visibility of the sport as a whole on the Olympic stage,” Siegel wrote. With NBC televising these events, Americans may get to watch “Chicken Legs,” a nickname courtesy of high school track teammates for those strong and skinny stems, run right into the history books.

How does Felix plan to rest up between events? “I may take a nap and have some treatments, such as bodywork from my massage therapist or chiropractor and an ice bath, to refresh my legs. I may put on some recovery boots, like NormaTec [to boost circulation and flush out fluids from inflammation]. I will try to stay off my feet until it’s time to run again,” she says. After the Aug. 15 races, she will have more time to prepare for the 200-meter final on the 17th and the relays starting the 18th.

However, all of this Rio preparation could be seen as premature: To secure her spot on Team USA, Felix first needs to qualify for the individual and team events at the Olympic Trials this July in Eugene, Ore.—and mend a sprained ankle she hurt in April.

“When I jumped down from doing pull-ups in the gym, I came down on my right ankle the wrong way,” she says. Though the minor injury forced her to drop out of the track-and-field season’s first two meets—one in Qatar in early May and the Prefontaine Classic in Eugene later that month—she hasn’t slowed down her training, which takes place six days a week from 9 a.m. to 3 p.m.

“We’ve just had to get creative with cross-training. We’ve also integrated some physical therapy into the training plan,” says Felix, who expects to be in top form in time for the trials. Her biggest driver these days is achieving her Olympic dream. “I’m a competitor. I love what I do,” she says. “It’s all about what is the next goal of what I want to accomplish.” 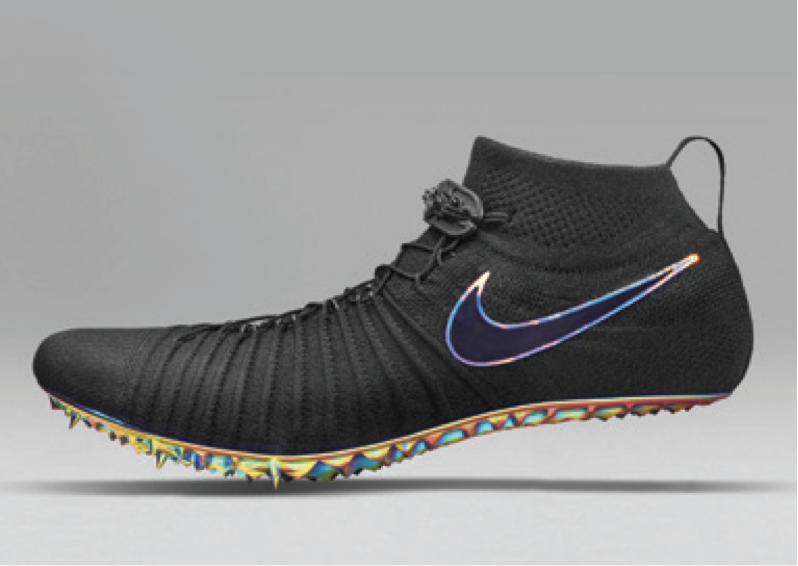 Cinderella Story
Only a custom-made track spike will do. When the difference between victory and heartbreak is tenths of a second, footwear is crucial to success. That’s why for 2016, Nike developed a shoe made specifically for Allyson Felix’s feet, stride pattern and racing goals. The Nike Zoom Super Flyknit spikes are not available for purchase—but you might be able to catch a glimpse of them as Felix speeds toward the finish line.

Here are the songs Allyson Felix listens to pre-race to get her head in the game.
“Eye of the Tiger” by Survivor
“Show Me What You Got” by Jay-Z
“Champion” by Kanye West
“Run This Town” by Jay-Z, featuring Kanye West and Rihanna
“Run the World (Girls)” by Beyoncé


Flex Like Felix: How does Allyson Felix prepare to race at breakneck speeds?
A typical training day for Felix starts around 9 a.m. with a three-hour track workout at UCLA. After a 45-minute warmup, which includes jogging, skips, lunges and stretches, she will move on to track drills with Coach Kersee, who keeps things interesting by changing up the hour-and-a-half to two-hour workouts each and every day.
“He always surprises my team,” Felix says, adding that Kersee never reveals the extent of the session until she arrives at the track—and often won’t let her know how many sprints she has left until she’s finally finished. Her two-hour weight-room routine afterward is much more predictable. She focuses on plyometric training to help build strength and agility.

Meet the Elite: Our Q&A with Allyson Felix

A World Record and More: 6 Takeaways From the U.S. Outdoor Championships

What the 1980 Olympics Can Teach Us About Race Cancellations