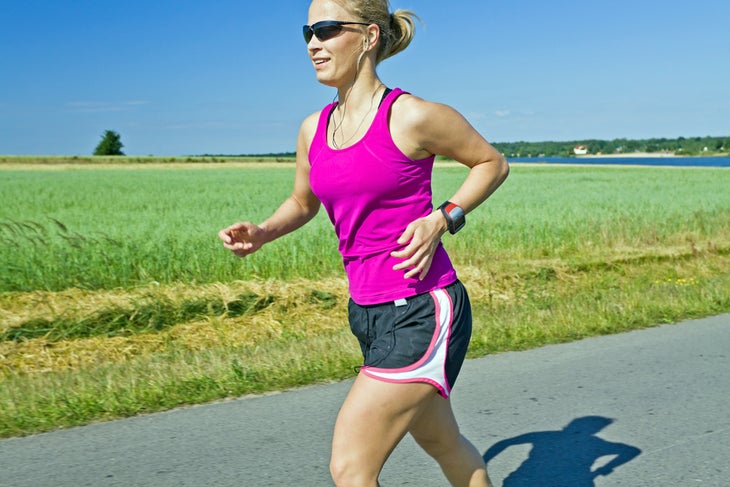 Throughout high school, I was tasked with having to take a mile test—at the beginning and end of each year. The goal was to ramp up your running speed. And guess what? I cheated. While I’m not proud that I lied to my gym teacher Mr. Facet—I said I was on my last lap when it was really my second—there was no way in hell he was going to get me to run it. My strong hatred for running continued through college until I gained so much weight eating crap, I had to do something about it. A dear friend who was sensitive to my struggle casually suggested I do a little cardio to burn calories. You mean run?! Ugh. I hated the idea of pounding the pavement, but I hated how I felt in my unhealthy body even more.

So I sucked it up, picked up a pair of sneakers from Marshalls, stuffed my Double Ds (that used to be Cs) into two sports bras, stepped out my front door, and ran around the block. And those 10 minutes were so brutal. My legs hurt, my back ached, and I was breathing so heavily, I thought my lungs would explode. I envisioned the local news team posting a pic of me with the headline, “Girl Takes Casual Run, Dies Sad Death.”

I thought, How the hell do people run marathons? It must get better. So I stuck with it and was amazed at how quickly my endurance built up. After a couple weeks, I could confidently jog around the block—without stopping! Yes! I, the running-hater was actually running, and although I was in no way loving it, I could now call myself a running-tolerator. There was a huge sense of pride being able to say I ran for 10 minutes straight without dying. My body felt stronger, and more importantly at the time, it looked slimmer.

My lofty goal was to run for 30 minutes straight—without stopping and without pain. After a few months it happened. I went from running-tolerator to —gasp —running-lover! What worked for me was that I took it very slow (I could have probably walked briskly at the same pace), and took each day as it was. Some mornings, I’d run three times around the block without stopping, and other times getting around once was a huge feat.

I’ve been running on and off now for 10 years, and even at this point—training for my first half-marathon—those first 10 minutes are still the worst. My body just rebels with shin pain, sore feet, tight hamstrings, and a foggy brain. And it’s not just me. Every runner I talk to agrees, and some say it takes them up to three miles to warm up and feel good on a run. But once you hit that moment, where your muscles feel strong and open, you feel light on your feet, and your energy’s high, you feel so happy, free, and alive, like you can keep going and going; that moment makes those first 10 godawful minutes so incredibly worth it.

If you’ve always hated running, it doesn’t have to be that way! Start off slow like I did, and just breathe through those first 10 minutes. Make sure you don’t skip out on the warmup, know how to fuel yourself for a run, know what to eat afterward (I’m so into this hydrating watermelon smoothie right now), and remember how to stretch to prevent soreness and injuries.