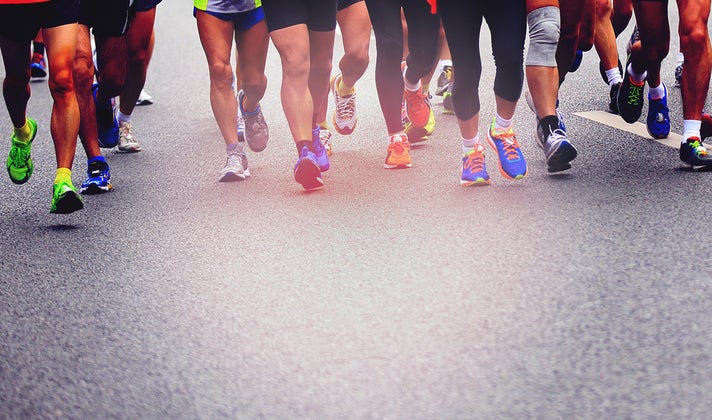 One of the most commonly offered tips to run strong during your goal race is to develop a mantra. A mantra is a word or phrase that is repeated, either internally or out loud, in order to aid concentration. Nearly every elite runner has one; Shalane Flanagan has used mantras like “Run without any regrets” or “cold execution” during her big races. Sara Hall likes to say “relax and roll” during marathons. While it seems like nearly every magazine and blog recommends one, finding a mantra never came easily to me.

Maybe it’s my cynical nature, but I’ve always felt a little silly using a mantra. I’ve never been able to find anything that felt right or actually motivated me. Often, by the time I start to actually feel tired enough to need a mantra during a race, I’m too worn out mentally to come up with one. However, I’ve been focused on doing everything I can to up my mental running game as I train for the Prague Marathon—and that meant it was time to develop a mantra.

It happened somewhat accidentally during a race. In the final two miles of my first half marathon of the season, I was doing my best just to stay upright at a pace I wasn’t quite prepared for and warmer weather than I was accustomed to. I didn’t want to run faster, I just wanted to hang on (and not vomit out my entire pre-race breakfast onto nearby spectators). I thought back to all of those articles that I read and decided now would be a great time to come up with a mantra that described my goals. My first attempt was: “I am strong. I can stay steady. I will not vomit.” Had I not felt so terrible at the time, I probably would have laughed out loud at my own absurdity.

I realized that even thinking that phrase was wearing me out, so I decided to pare it down a bit. Stay strong, stay steady, I thought. And finally, Strong and steady. Nothing fancy; no heroics. Just a strong finish in a race that felt over my head—that’s all I wanted. Finishing strong has been the hardest part of racing for me, but I’ve used the “strong and steady” mantra in my past four races—and negative split them all. While that’s undoubtedly a result of hard and diligent training, it’s also a nod to the tough mental work I’ve been putting in.

If you’ve had trouble developing a mantra, try this:

While developing a mantra won’t make up for a weak training cycle or a rough day, it can help carry you through when you need a little extra boost. Find yours!

Tweet @WomensRunning and @thetrexrunner and tell us your race day mantra!