Leni is my service dog and accompanies me on every run. We run together because without her, I wouldn’t have the confidence to go out alone. Plus without her, I might not be running at all. In January 2015 I was diagnosed with a rare disease called Mast Cell Activation Syndrome (MCAS) after an almost nine-year medical journey of unexplained symptoms. Leni is my medical alert dog and helps me manage this disease and live as normal a life as possible.

MCAS can be described as having allergy-type reactions to anything and everything. These reactions can range from mild symptoms (rash, itching, hives, flushing) to full blown anaphylaxis requiring EpiPens and hospital visits. Mast cells are located throughout the body, so symptoms can vary from patient-to-patient which makes it a challenge to diagnose and even more challenging to treat. There is no cure, but there are ways to manage symptoms.

Prior to my diagnosis, I had been an athlete. I played two sports in college and began running after graduation to stay in shape. Since then, I’ve run around a dozen half marathons, countless 5Ks, and two marathons. And I grew to love running. It became my stress relief, time to clear my head, a way to get outdoors and enjoy the weather, a chance to push my body…so much more than just a way to stay in shape.

And then I lost my ability to run. In July 2015 I began to struggle with my balance, strength and coordination as a result of secondary diagnoses due to my MCAS. In a matter of weeks, I went from being able to run 8 miles at a time to being unable to walk across a parking lot without assistance. When tests came back inconclusive and my doctors had no answers, I was left wondering if I would ever run again.

Then Leni came into my life. With her help, I was able to regain some control over my unpredictable health. She is scent trained to alert to low blood sugar and my mast cell reactions. As Leni helped me get my blood sugar more stable, I was finally able to see progress in physical therapy and regain some of the balance and strength I had lost. As she became more sensitive to my body, she would give me 15-20 minutes of warning before my mast cell reactions. I no longer had to fear random, out-of-the-blue anaphylaxis. I still do react, but with her alerts, I at least know it is coming and since I get warning before my symptoms begin, can start my medications earlier to help minimize the risk of more severe reactions. 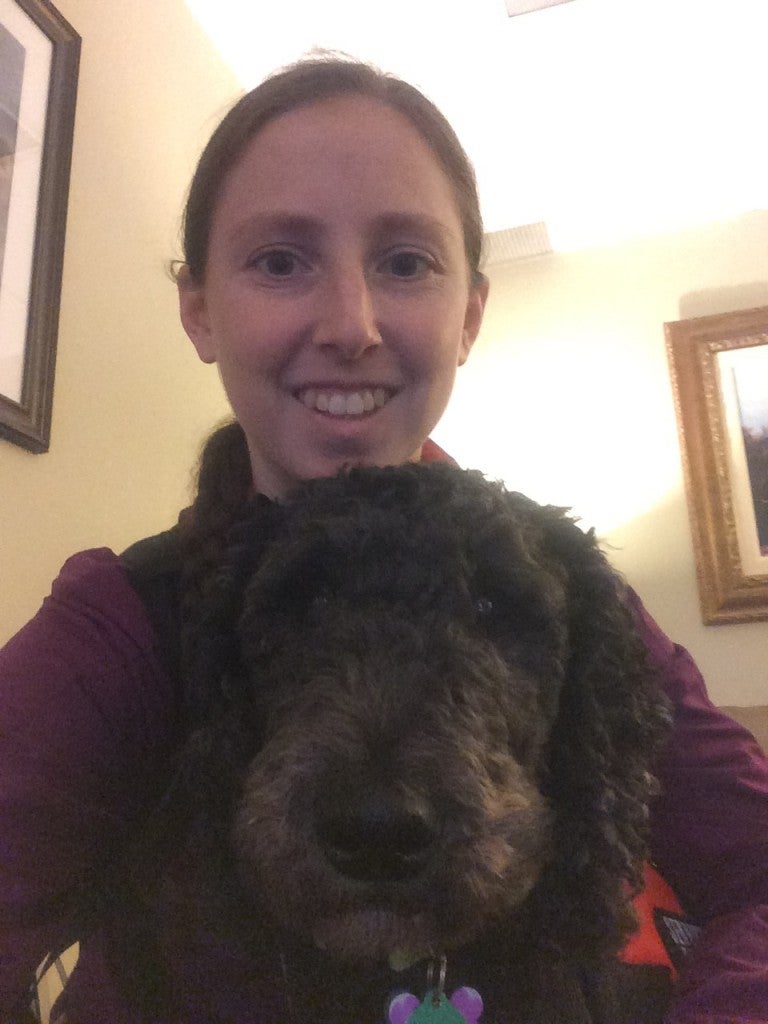 In March 2016, 8 months after I lost my ability to run, Leni and I took our first run together in physical therapy. It was less than 200m, but I was running again! Since that run, we have worked our way up to 60 minutes of a run/walk program. Almost every run has been with Leni by my side. When I run with Leni, I have the confidence to go outside knowing that if I start to have a reaction, she can alert me beforehand. She gives me some semblance of control over my unpredictable health, and she gives my family peace of mind knowing that I’m not alone.

My running now looks way different than when I was training for marathons. Not only do I have a dog by my side, but I can’t just put on my running shoes and go for a run anymore. I have to wear compression socks to keep whatever circulation going that I can. I run with a hydration pack so I can carry my EpiPens, emergency medications, medical information, phone and miscellaneous other things I might need. If it’s really warm, Leni and I may need our cooling vests so that we don’t overheat even in the early mornings. Even still, there are some days that even with my best effort, my legs and body betray me and I can’t make it down our cul-de-sac.

At first, these moments of failure were crushing. I was so discouraged to see how far I was from the runner I used to be. I didn’t want to admit I couldn’t keep up my former paces or distances. But then I was reminded (by a cold nose pressed against my leg) that I’m NOT the runner I used to be anymore…and that’s okay.

RELATED: Consider Getting One Of These If You Run With Your Dog

I didn’t fight to regain my ability to run because I wanted to set course records or be an elite marathoner. I pushed myself in physical therapy and worked as hard as I could to be able to run again for no other reason than because I love it. Fast, slow, long, short…just details. I am a runner because I run. Yes, my running looks different now, but part of that is because I have Leni….with her I can still be a runner.

I may still be miles (literally and figuratively) away from where I used to be, but I’m getting back to running one step at a time. Much of that is thanks to Leni being by my side. She is more than the best running partner I could ask for. She has become my lifeline and helped me regain not only some control over my disease but also given me the ability to return to an activity I love.

You can read more from Kylene Boka, MS at her blog, Maintenance Required.

These Athletes Embrace Running To Curb The Symptoms Of Dementia