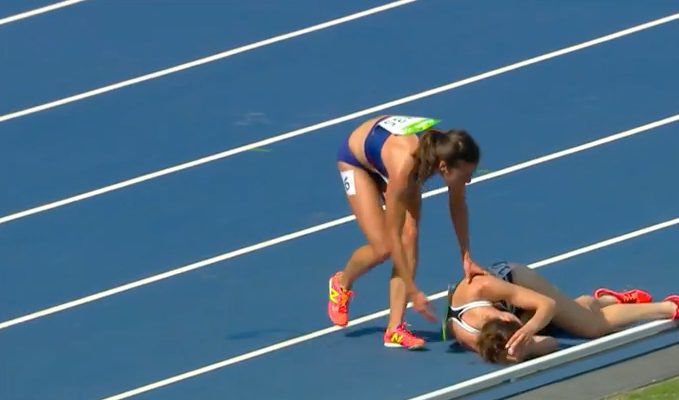 U.S. runner Abbey D’Agostino gets a shiny gold medal for good sportsmanship during the 5,000-meter qualifying race on Tuesday morning. With about one mile to go, D’Agostino clips New Zealand’s Nikki Hamblin, causing her to go down on the track. Instead of recovering quickly to finish the race, leaving the obviously hurt runner on the ground behind her, D’Agostino helps Hamblin up, telling her “we have to finish this race.”

Related: Keni Harrison Missed The Olympic Team, So She Broke The World Record Instead

The roles shifted when D’Agostino’s knee buckled, forcing her to collapse in an effort to resume running. Hamblin returns the favor—note that the runners had never met before in their life, and they are competing against each other to advance to the finals—helping D’Agostino up to finish that final 4.5 laps around the track.

Both runners finished way outside of their personal bests, D’Agostino noticeably limping through her strides due to the knee injury. However, since no one was ruled “at fault” for the collision, both runners advanced to the final 5,000-meter race later this week.

“I am so grateful to Abbey for doing that for me,” Hamblin said, according to USA Today. “That girl is the Olympic spirit right there. I am so impressed and inspired.”

That right there is the spirit of racing. Watch the video clip to see the collision and inspirational moment of running.