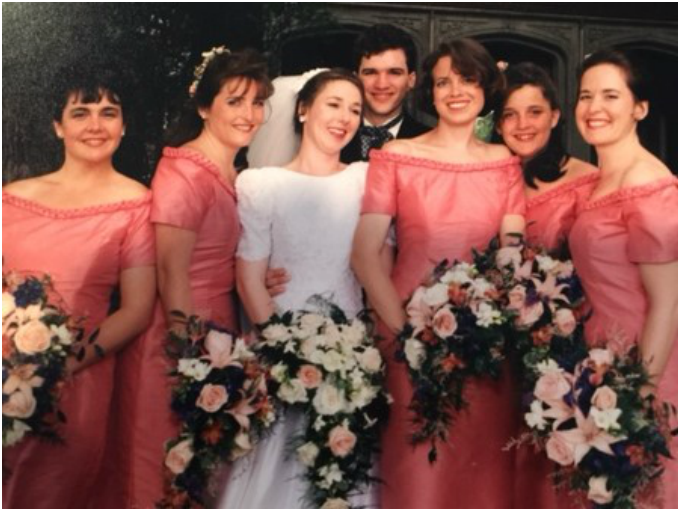 I flew from Indianapolis to San Diego two days after Christmas. I spent New Year’s Day next to the Pacific Ocean. I distinctly remember having sent Maryclaire a New Year’s greeting last year from Treasure Island in Florida. Maryclaire, always busy and trying to catch up, and this even before she was married and had four children, had responded to it on Nov. 2. Her text to me that morning began, “Hello Dear One” and ended, “I’d really love to see you. Bless.” I read that text message—a four paragraph precious gem—for the 50th time.

Maryclaire has now been gone for two weeks: How can this New Year’s Day be so different from the last one? How can one year make such a difference in the lives of so many?

I text Maryclaire’s husband Jay from the Chicago airport as I wait for my transfer to San Diego. There I will begin to train seriously for the 10K for Claire. But just because I am “escaping” from the mundane to a condo right next to the Pacific Ocean does not mean that I have shut down my grief or forgotten that Jay and his family still suffer.

I want Jay to know that I am thinking of him, which is exactly what I write: I am still thinking of you and wanted you to know you and your family are constantly in my thoughts. I AM going to run a race for Claire on June 11 in Portsmouth. My training officially starts tomorrow. I miss her so much and am filled with regret over time lost. Running to raise money for her scholarship will help me. As for you and the children, I wish you peace. I am a phone call away. Let’s talk soon.

My text is wandering thoughts, but Jay’s response is short and pointed. It gives me chills: June 11 is our anniversary.​

Related: How An Ultramarathon Helped One Runner Heal

A series of jumbled images quickly crosses my mind, for I was the matron of honor at the wedding of Maryclaire and Jay on June 11, 1994. This wedding was held at a historic estate in the rustic boonies of Connecticut. I can’t remember the name of the estate, and that bothers me as I replay images of the wedding in my mind. Its extensive grounds and elegant interior provided a sophisticated backdrop to the hijinks and the dancing back then.

There were five bridesmaids serving Maryclaire at her wedding, keeping her calm and generating laughter. Jay’s young sister Eleanor joined four of Maryclaire’s friends. Three of these friends—myself, Susan and Cindy—had known her since high school. As to the other, Deb, she had met Maryclaire in the Boston days of the 1990s. (It was Deb who would keep Jay company 10 days after Maryclaire’s death, on the day that was to have been her 49th birthday.) Looking at the photos of the wedding party I notice that our smiles were so wide it seemed our faces couldn’t hold the happiness of that day. ​​

I distinctly remember Maryclaire as a bridal sylphid at her wedding, a spirit of the air. My friend generated such peace and contentment that she seemed to float across the patio as she greeted her guests. She was a classic and beautiful bride.

I look again at Jay’s text, and it still reads: June 11 is our anniversary. I see a sign. The universe has endorsed my decision to run this race. I convey this to Jay, who agrees. And so I will—at least in my own mind—assume again my duties as Matron of Honor on their 22nd anniversary. I will convince Jay and the kids to come to Portsmouth for the Market Square Day race. In that way, Jay will have company on his anniversary as well as a Claire-oriented way to spend the day.

Related: 8 Things Running Has Taught Me About Life

Meet the Elite: Our Q&A with Sarah Crouch

Aspiring Elites are Banding Together to Meet Tougher Time Standards