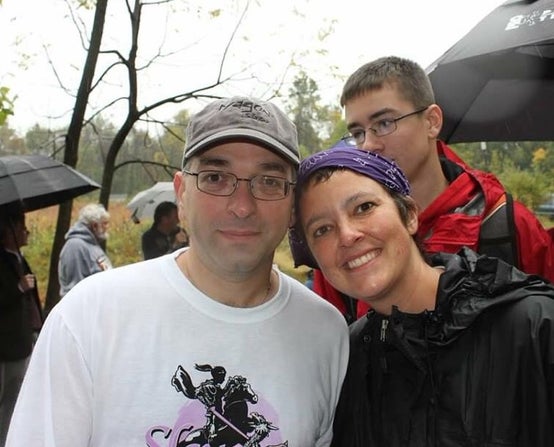 I’d like to tell you the story behind a family-organized charity 5K and the amazing woman, couple and family behind it. The run is the second annual Slay Sarcoma 5K Run/Walk. The woman behind it is Dr. Amy Reed, an anesthesiologist and immunologist, a mother of six, wife, daughter, sister, aunt, friend and advocate for women’s health.

I first met Amy sometime in 1996. We had both recently started dating our then boyfriends and current husbands. Our husbands spent a good part of their childhood and all of their teen years growing up together in the suburbs of Philadelphia. Many of their weekends entailed going to each other’s homes, walking to the local Wa-Wa convenience store to buy magazines and snacks and sharing hours discussing future dreams.

I met Amy’s husband before meeting her. He greeted me with open arms, a welcoming embrace, the warmest eyes and widest smile. He was so excited to meet his childhood friend’s girlfriend, knowing that whoever I was, his friend had fallen hard for a girl, just like he had for Amy. It was so heartwarming to see these young boys turn into young men, ones who were excited that their present day reality was better than anything that they had dreamed about in those years of flipping through magazines.

Amy and her husband got married within a couple of years of us tying the knot. We had our firstborns, boys for both families, within a couple of months of each other in 2001. From 2001 to 2006, my husband and I had a total of three kids, two boys and a girl to complete our family.  From 2001 to 2012, Amy and her husband had six kids, four boys and two girls, all while both completing medical degrees programs, doctorate programs, residencies and fellowships. Our family moved to Los Angeles to continue its journey, while Amy’s family moved to Boston—just before their journey took a drastic turn.

In October of 2013, Amy underwent surgery to have what were thought to be benign uterine fibroids removed. Eight days after her surgery, she found out that she did not just have benign fibroids but a hidden uterine leiomyosarcoma. Leiomyosarcomas (LMS) are malignant tumors that develop from smooth muscle tissue. They are rare and aggressive tumors, and are often resistant to radiation and chemotherapy. The tool that had been used to break up Amy’s uterus and fibroids prior to removing it, called a power morcellator, had actually caused what would have been a stage 1 cancer to spread throughout her body, making it a stage 4 cancer.  Eighty-five percent of women with stage 4 LMS die within five years of diagnosis.

Over the last two years, Amy and her family have waged a tireless battle against LMS on two different fronts. The first front has been to increase patient safety practices and try to ban the use of the morcellator. Since they started bringing awareness to Amy’s story, other women whose cancer was spread from the use of a morcellator have also come forward. They have accomplished getting the FDA to issue a warning against the use of the morcellator—but not to completely ban it. They will continue to fight that battle while raising their six kids, while Amy tries to live every day that she has left with her six kids to the fullest.

The second front has been fighting LMS in the lab through research. Since LMS in the general population is extremely rare, little research is specifically devoted to it. The Second Annual Slay Sarcoma Run/Walk 5K is a charity event that raises money specifically for research on Leiomyosarcomas (LMS). It is has been organized by the incredible family of Dr. Amy Reed. Last year, through the first annual Slay Sarcoma 5K, Amy and her family were able to raise $30,000 for LMS research.

This year’s event is on Saturday, Oct. 17th just outside of Philadelphia; however runners and walkers can participate from anywhere in the U.S. as virtual runners. You can read more about Amy’s story, her family’s tireless battle to have the morcellator banned and LMS at the event website. You can sign up to participate in person or virtually, or just read Amy’s story.