In her self-described “running memoirs,” author Hannah E. Phillips (now a marathon runner) recalls the first time she ever laced up her trainers. Excerpt adapted from No Run Intended. 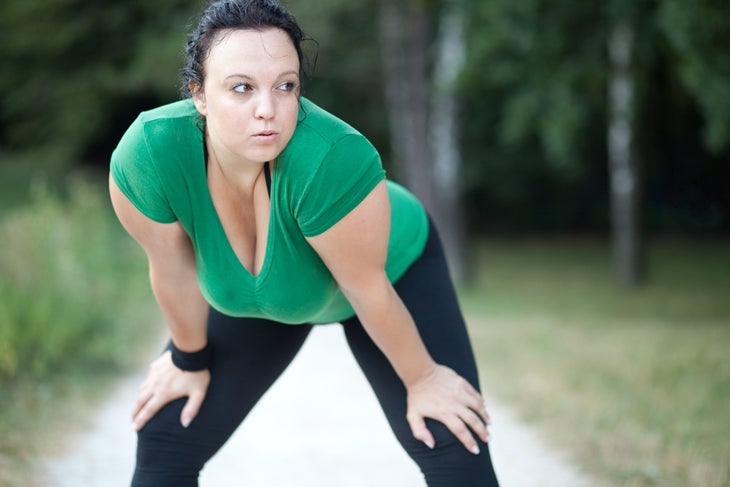 My first run. My very first run. The one where I shut the front door behind me ready to resemble a chubbier, more determined Paula Radcliffe. That first run where I left the house in the dead of night in clothes fit for an overweight ninja at best, but a potential bank robber at worst.

“You’ll be fine,” my fiance Scotty Boy told me as I sort of clung on to our door handle for dear life.

“No, what if someone actually kills me, you hear all these…”

“On the way to the bloody park? Don’t go then.”

The door shut behind me. I was going.

And it was there and then I learned four very important lessons:

“I can do this,” I finally said before setting off like a bat out of hell. If Scott had blinked from his observation perch in the kitchen window he would have missed me because I had gone.

Related: It’s Never Too Late To Run Your First Race

I managed to run through my small neighborhood in a matter of nanoseconds, literally I whizzed and I almost whooped with joy when I got to the other end. This was easy. Why hadn’t I done it before? It was just like those times in primary school when we used to play horses and stables and gallop over the tarmac during playtime. I loved running. Running was amazing. I was brilliant at it. Why hadn’t the Olympic committee telephoned me to be part of their team?

By the time I got to the start of the running path (a mere half a mile from my front door) I was panting like a dehydrated Labrador and the balaclava was ensuring my face was not only sweating, but itching too.

But I had to carry on, I’d made it this far. To not actually get round the oval would be failing and I wanted to return home triumphant in my ability, but my face was really itchy and every time I exposed my skin to the January air it would tingle and sting quite a bit.

“Just a little farther,” I repeated in my overheating brain. “If I just lap the oval once I will have done well.”

Now, like I said it was cold and it was dark and somewhere between my idea to leave the house at the dead of night and donning military style attire I had forgot to factor in the fact that running around a council park at night would be bloody terrifying.

I couldn’t see. Partly because of my cat burglar outfit, but partly because it turned out the oval wasn’t lit up; there was no lighting, not even one measly lamppost that guided the way I was supposed to go.

I also noticed that even though I’d strapped my overly large knockers down, my tummy and my thighs had started to wobble and shake and make me feel reasonably sick. There’s nothing more off putting than part of your body being strapped down and the rest of it being allowed to flap and wobble. I’d like to compare myself to a running rhinoceros, but if you Google a running rhinoceros they are lean and reasonably agile given their size. I was more like a slow moving bowl of thick jelly, maybe more like school canteen blancmange?

Of course, my face was contained within the balaclava so no one was exposed to my flapping cheeks, which was something of a comfort as I caught my breath through the wool and began the short, scary pilgrimage around that egg shaped death trap.

The first part was totally fine because the street lights from the road clearly highlighted the small tarmacked path I was to take, it was only when I got further onto this path did things get tricky. And by tricky I mean I couldn’t see one foot in front of the other.

“Bloody hell,” I mumbled as my  trainers stumbled over rocks and what I could only imagine was mud…or was it thick curdled blood from runners long gone that had been maimed and then disposed of by whatever killer thing was clearly lurking around waiting for idiots just like me?

You know when you get scared? Like when you get up to pee in the middle of the night and convince yourself there’s a clown in the corner of the bathroom waving a machete around? Or when you’re sure there’s a serial killer next to you on the otherwise empty train? Well, try and conjure those feelings, those gut wrenching, stomach churning emotions and double them and then you’ll get a smidgen of how high my heart rate was, how much adrenalin was pumping through my  body and how much I actually wanted to give up, lie on the floor, curl into a ball and pretend I was dead until some sort of rescue party collected me.

In hindsight being terrified was the best thing that could ever have happened because it got me around the oval relatively quickly. In fact, I ran all the way until I was back in the glow of a street lamp, panting, sweating, itching and desperate for a wee. If I could have compared myself to anything at that precise moment, it would have been a Shetland pony. A trotting, overweight, Shetland pony that was wanted by the police…

“Ah excuse me, is everything okay?” a stern sounding voice called.

“Yes…fine,” I said automatically before turning to face the law. “I’ve been running.” I stammered and then laughed like it was the funniest combination in the world with one of those “I’m completely mental” sounding laughs.

“In a balaclava?” Officer Two, who I immediately identified as Bad Cop, asked.

“Yes,” I laughed again and was glad said balaclava was in place given snot flew from my left nostril such was the force of my still mental sounding hoots.

“Running in a balaclava?” he repeated like it was the most idiotic thing he’d ever heard in his life, which, once again, with the gift of hindsight…

“I didn’t want people to see me,” I said and wondered whether I should just offer to be taken in for questioning myself.

How could I put it without crying or blatantly insulting their obvious intelligence?

“Embarrassment,” I said after what felt like an hour of contemplating. “I’m a bit overweight.” I did a sort of “check me out” gesture with my trembling hands.

“You’ve got to admit; it looks a bit dodgy, love,” Good Cop said rubbing his chin. “I mean, you were practically keeled over, all in black with a balaclava on. Can you see where we are coming from?”

“Totally,” I agreed and as he said, he had a point.

“Can I suggest maybe just a bobble hat tomorrow. Maybe some sunglasses?”

“On your run tomorrow?”

“Oh I’m not bloody going again,” I said finally revealing my very pink, very chubby cheeks. “No, it wasn’t for me. Look at the state of me!”

“Don’t be ridiculous,” Bad Cop piped in. “Even the greatest had to start somewhere. A year today you’ll look back and say, ‘Remember that first day where I nearly died and I nearly got arrested? Thank god I carried on.’”

“Good luck,” They both chorused before pulling off with a flash of their siren.

“Arrested,” I said to myself before running all the way home.

Naturally the first thing I did was take off my three hundred black layers and lie on the cool tiles of the kitchen floor. My legs hurt, I had a cramp, my face was burning, my butt was absolutely freezing and I smelt like the odors of three hundred PE changing rooms had been bottled and sprayed over my corned beef skin.

“How did it go or shouldn’t I ask?” Scotty Boy said stepping over me to put the kettle on.

He laughed and mumbled something about my overactive imagination before returning to watch Liverpool lose.

I think I did my starfish impression on the kitchen floor for well over an hour, contemplating everything I’d just done. Firstly, I’d gone, I’d actually gone out of the door. I’d put one foot in front of the other and carried myself around a loop. Secondly, it wouldn’t be like this forever, despite what the irrational part of my brain was screaming. Things could only get better and finally I felt something I hadn’t felt before. I felt proud. No one had made me go out; no one had held a gun to my head to make me run; no one had forced this activity upon me. I’d gone because I wanted to and because I could. I’d gone because I wanted to make changes and no one said changing would be easy did they?

Kara Goucher’s Advice to Her Younger Self: “Believe in Your Power”