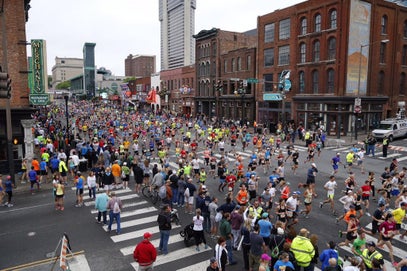 Nashville’s iconic race is singing a new tune next year, as the event is rebranding to become the St. Jude Rock ‘n’ Roll Nashville Marathon & 1/2 Marathon, which has been known as the Country Music Marathon since 2001. The historic Nashville race will be further integrated into the Rock ‘n’ Roll Marathon Series global brand, which includes 30 destination events taking place around the world annually. Additionally, the name change aligns with Music City’s diverse foundation that features artists spanning all genres, not just country.

“Nashville grew from a foundation built on music, and while country music is a pivotal piece of that, it’s not the only genre that defines Music City,” said Josh Furlow, President of the race series. “The rock and roll genre roots itself in a spectrum of music styles including bluegrass, jazz, folk, soul and of course country. Our goal is to celebrate Nashville as a destination for live music and running by linking the historical race with the power of the Rock ‘n’ Roll Marathon brand.”

“This race has always been an event that creates excitement every year around being active and healthy,” said City of Nashville Mayor Karl Dean. “Nashville prides itself on being Music City, and we hope everyone will embrace the new motto ‘Run Music City’ with the renamed race.”

St. Jude Rock ‘n’ Roll Nashville will provide a similar race experience to years past, while emphasizing a broader integration of music. Runners will tour some of Music City’s most notable hot spots and attractions, with thousands of spectators lining the course to cheer on participants. The race will once again start in downtown Nashville on Broadway, travel through some of Nashville’s iconic locations such as Belmont University, the Tennessee State Capitol Building, Shelby Park and the Cumberland River, before finishing at Nissan Stadium, home of the Tennessee Titans.

“What originally started as the Country Music Marathon 17 years ago has evolved into an event that annually attracts more than 30,000 visitors from around the world,” said Butch Spyridon, President and CEO of the Nashville Convention and Visitors Corp. “We’re excited that the event’s new name celebrates the diversity of music genres thriving in Music City, and we look forward to participants being part of the Rock ‘n’ Roll Marathon Series as they run Music City.”

St. Jude Children’s Research Hospital, will return as the title partner and official charity of the 2016 St. Jude Rock ‘n’ Roll Nashville Marathon. Last year more than 3,000 St. Jude Heroes participated in the race, raising more than $2 million for the hospital by securing donations from family, friends and co-workers. Funds raised from St. Jude are instrumental in supporting the $2 million per day it takes to run the hospital and allow families to never receive a bill for St. Jude for treatment, travel, housing or food.

Do you love this name change? Here’s some more on the global Rock ‘n’ Roll series:

Why Rock ‘n’ Roll Virginia Beach Is A Total Party