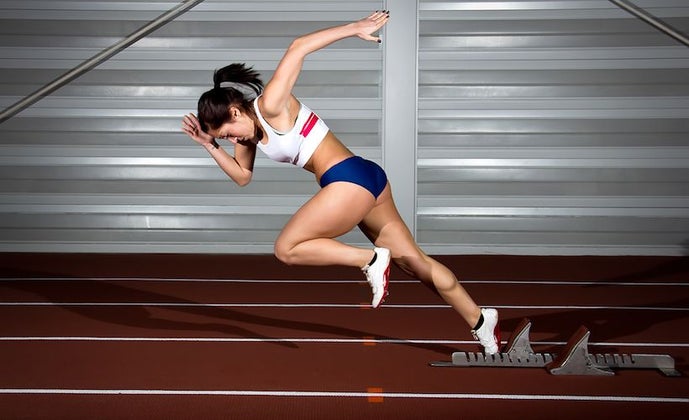 This excerpt is from SpeedRunner: 4 Weeks to Your Fastest Leg Speed in Any Sport by legendary running coach Pete Magill. In SpeedRunner, Magill reveals his four-week training plan to make any athlete a faster runner. With Magill’s championship-winning workouts, athletes will focus on strength, agility and acceleration to find a performance edge in any sport: running, triathlon, football, soccer, tennis, baseball, basketball and other team sports.

Acceleration is the most prized running skill in sports. And it’s the phase of speed that every athlete utilizes.

“Only in track & field’s 100- and 200-meters is top-speed running a key factor,” says exercise scientist and sprint biomechanics expert, J. B. Morin, in a 2015 interview. “In all other sports—soccer, football, rugby, etcetera—much shorter distances represent most of the demands of the game, and very rarely do players actually reach their individual top speed.”

If you compete in team sports, you know what Morin is talking about. Studies show that decisive sprints in team sports last less than 20 yards—and often less than 10 yards. A 2016 study found that half of all sprints in soccer last less than 10 yards, which is a good thing since the average player performed 150 to 250 of these 2- to 3-second accelerations per match. A 2012 study determined that in baseball, a batter’s chance of beating a throw to first base was most affected by his acceleration from home plate to the foul line—a distance of just 45 feet (15 yards). And in the NFL, home of America’s speediest team-sports athletes, research found that a player’s 10-yard sprint time was almost perfectly correlated to his 40-yard performance. In other words, an NFL player who could burn a fast 10 yards was good to go for 40—which is what really counts in a league in which less than 1 percent of plays go 40 yards or more.

Mike Boyle, a strength and conditioning coach whose resume includes the 2013 World Series Champion Boston Red Sox, the NHL’s Boston Bruins, and numerous Olympic team-sports champions, sums it up best in his book, New Functional Training for Sports: “Sport is about acceleration, not [top-end] speed.”

Acceleration at its most basic is the act of increasing your running speed. From a standing start (or blocks), you explode into action. If you’re already running, you pick up the pace. Acceleration continues until you can no longer increase your speed, at which point you achieve maximum velocity (top-end speed).

Acceleration seems simple enough. You want to go faster, so you run harder. In reality, acceleration requires a different gait cycle than steady-pace running, an emphasis on powerful concentric contractions (at least at the start), and, most importantly, enough newly generated force to overcome inertia.

Newton’s third law of motion says: “For every action there is an equal and opposite reaction.” To understand inertia, we turn to Newton’s first law of motion: “A body continues in a state of rest or uniform velocity unless acted upon by an external force.” For acceleration, the state of rest equates to a motionless start—that is, a standing, 3-point, or 4-point start. Uniform velocity is the steady pace you’re running before you accelerate. Both represent inertia. Neither can change until you generate enough force to overcome them—to accelerate.

So what’s acceleration? It means applying enough force to the ground to increase your speed.

Most of what we know about acceleration comes from sprinters, sprint coaches, and studies on sprinters. That doesn’t mean the knowledge isn’t relevant to speedsters outside the sport of track & field. The acceleration mechanics practiced by the world’s top sprinters are, by and large, the same mechanics you’ll use (or should use) in your sport. Sure, you’ll run with a slightly lower center of mass, less knee lift, and less knee flexion (bending) when agility is required, but anytime you explode for a 5- to 20-yard burst, you’ll want to be acceleration-trained according to the same gold standard that produces elite sprinters.

In the SpeedRunner program, we’ll cover the basic ingredients of acceleration:

Acceleration lasts between one to five seconds in team-sports contests. No matter how many hours you put into every other skill required for your sport, success in your sport comes down to those seconds. Or, more accurately, it comes down to the tenths-of-a-second advantage you’ll need over your competition.

Run Strong, Stay Hungry Excerpt: How To Set A PR In Every Decade