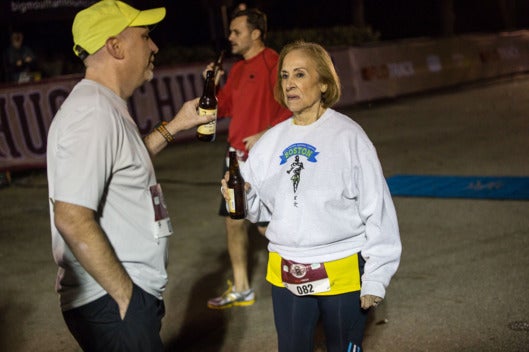 So this is one pretty cool grandma.

Eighty-one-year-old Elvira Montes completed the FloTrack Beer Mile Championships on Dec. 1 in Austin, Texas, an event where every competitor chugs a beer and runs 400 meters four times (you puke, you’re DQed). But aside from being the oldest runner in the field—as well as the oldest finisher in history—Montes also downed brews and miles faster than her daughter, Renee, who also competed. Mom finished in 20:24, whereas her daughter covered the distance and drinks in 21:14. And forget about her son-in-law—he didn’t even finish the event.

“I don’t have any secrets, I just wanted to prove to my daughter that I could run and drink beer,” Montes, who prefers Scotch, said in an interview. Sans beer, Montes has won her age group at the BAA 5K five times.

However, beer-milers aren’t immune to the running (and buzzing) bug. Her goal for next year is to beat 20 minutes. Anyone want to take her on?