Despite what your favorite Instagram feed might tell you, running is not always sunshine, #fitspo and quotable moments. Sometimes it is—that’s why we keep racking up the miles!—but when bad days and rough workouts crop up, tricks to stomping through the weeds suddenly seem nonexistent. So what’s a runner to do when hitting that dreaded “wall”? How do you power through with tired legs when there’s just 1 mile to go (and that mile feels like it might as well be 100)? The life of a runner comes with roadblocks, whether physical, mental, emotional or a messy combo of all three—so prepare before they land in front of you.

When you’re tired during a run… know your reserve tank. Dr. Jim Bauman, sports psychologist consultant for the Brooks Beasts Track Club, compares our runner bodies to cars, saying that the empty light means you’re low on fuel, but not completely out. Practice helps you learn how many more miles you have in you before you sputter to a stop. “Learning how far you can go when you feel like you are low on fuel is different than slowing down or stopping.” Often feeling tired is just that gaslight popping on—there are still miles to go!

When you need a convincing reason to get up and out… name your alarm. Once the phone jingles with that sunrise wake-up call, isn’t it more motivating to see “GET YOUR BUTT OUT OF BED” lighting up the screen? If a dose of tough self-love isn’t quite the right choice, select a reward you’ll give yourself for running that day and name that ring after it. Who doesn’t want to see “pizza for dinner :)” at 6 a.m.?

When you need a reminder that you’re a badass… create cues. “A cue is something as simple as a letter, a word, a couple of words or symbol. However, it is important that the cue is visual,” says Bauman. Words or mantras can be hard to remember when physical pain starts to take over our thoughts during running or racing. If it’s a star you draw on your palm or a sign your friend holds up at a track race, make it a cue that you are guaranteed to see consistently and that will mean something every time you look at it.

When you sign up for your second race after a terrible first one… remember that every single runner has had a rough day. Jess Underhill, WR blogger and coach at Race Pace Wellness, says that by the time you crossed that first finish line, you’re already a stronger runner than you were at the start. “Focus on the lessons you learned from the unsuccessful race and move forward. Then apply those learnings to your new training program and take them with you to the start line of your next race.” No two races look the same, so consider this a fresh new future separate from your less-than-perfect day in the past.

When you feel like running hurts… know you’re right and that’s (probably) okay. This can be an issue especially if you’re just starting out. In that case, it’s more accurate to say: It’s not easy to start and it’s tough to stick with it for those first few weeks—or months—which is true for most new endeavors. But like most runners believe about their true love, it’s so worth the wait. “If you give it more time, eventually you’ll experience the elusive ‘runner’s high’ and become addicted,” says Underhill. And of course if you experience ongoing pain, it’s probably time to call the doc!

When you feel jittery during the weeks before a race… visualize race-day issues during practice. Underhill says imagining difficult moments of the race—whether it’s a specific mile, part of the course or a potential issue with fuel—will help you better prepare for ups and downs. Visualize yourself successfully navigating bumps in the road and thrusting your hands in the air across that finish line victorious. Bauman also says locking in a game plan helps every runner, whether new or seasoned. This includes establishing a pace that you should try to hold “without fluctuating during the race.”

When you feel like you already biffed your run midway… talk yourself through it. 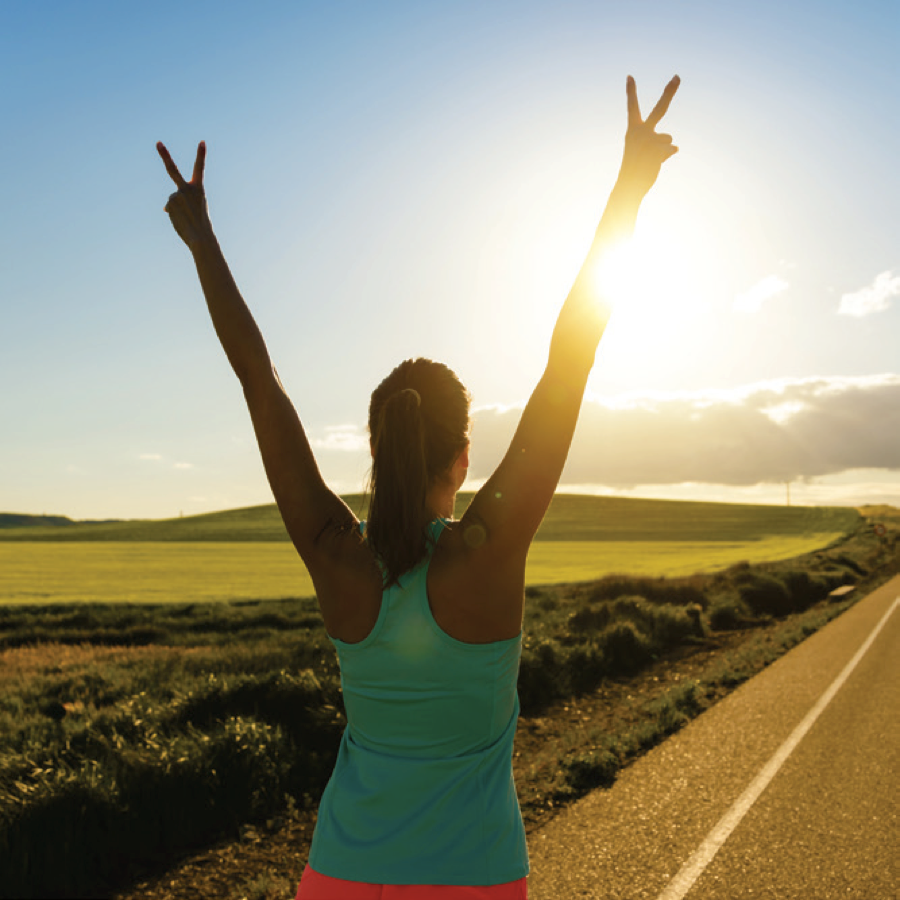 “Last summer during a 5K, I blew up after the second mile but really wanted to still give that final push for the last mile,” recalls Underhill. “To keep going, even when I felt like my legs were going to give out, I kept telling myself, ‘It’s okay if it hurts. This is not supposed to be easy, so GO!’ It must have worked, because I ran my fastest race over a mile in my adult life.”

When you fear “the wall”… stop thinking of it as a bad thing. Bauman notes that the dreaded wall is only made worse if runners view it as something to avoid. The idea is to flip the switch. “Expect being uncomfortable, but expect to run through it,” he says. “We know from science, it is both [physical and mental].” He says we can amplify the symptoms by demonizing the wall—and then it will come even faster. If you do feel as if you’ve hit it, try counting strides and checking in with your mechanics to stay focused on moving forward. Underhill says to remember: “There will be difficult moments of the race. Those thoughts are normal, but that doesn’t mean you won’t finish.”

A Coach’s Guide To Trail Running