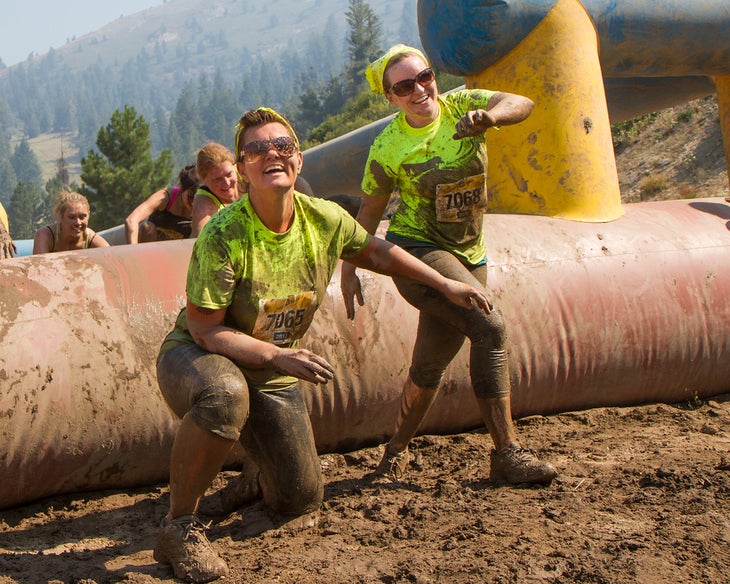 During a recent marathon, I was trying to distract myself in any way possible. When I wasn’t concentrating on my aches and pains, I was observing my fellow runners.

I had a deep thought: despite the fact that we come in all different shapes and sizes, have unique fingerprints, and share different preferences on whether we wear underwear or not while we run, we do have some commonalities.

If you are a newer runner and haven’t done much distance running before, you should get very comfortable with bodily functions and fluids before you partake in the journey. With that said, here are my favorite raunchy things runners do (in no particular order). And, as a special bonus, I’m going to tell you WHY these things occur. You’re welcome.

1. We spit. A lot. I can’t count the number of times I was almost spit on during the marathon. When you combine a crowd of 25,000 people, all of whom are runners producing a certain amount of phlegm, it can get wet and wild pretty fast.

Why does it happen? Using your lungs a lot causes an increase in mucus and saliva production. Also, as the body warms up, it produces more saliva.

2. We fart. I am going to be honest and state that I don’t think I farted once during the race. This occurrence is very, very unusual for me, and I missed the fun that a few good farts can provide. I did, however, enter into many a person’s fart zone on the marathon course, and it was not pleasant – talk about hitting the wall!

For the record, I wish that runners were required to take a pill making their farts show a cloud of color. The color would be linked to the severity of the fart – i.e., red would be deadly, etc.

Why does it happen? We all know gas builds up in the body when we swallow air while eating. Gas is also produced when our body is breaking down undigested foods (which produces hydrogen, carbon dioxide and methane). The reason the gas comes out so abruptly and frequently while running is that running can speed up the digestion process. Combine that with the pounding of your feet, and you get the fart frequency. Plus, it’s pretty tough to hold those babies in while running. Try it sometime!

3. We snot-rocket. This action requires the runner to push one nostril closed while simultaneously blowing out of the other. Doing so produces projectile snot, often referred to as a “rocket.”

Why does it happen? When running (especially in cooler temperatures), your nose warms and moistens the air you breathe before it reaches your lungs, producing mucus in your nose and throat.

4. We smell. Let’s face it. When you are outside for several hours in 80-degree heat, no deodorant is powerful enough. And, since we only put deodorant under our arms and not in other crevices, stuff starts to smell.

Why does it happen? Of course we sweat when we run – it is the body’s way of trying to keep us cool. But, sweat in and of itself does not smell. It is the glands that the sweat comes out of that cause the smell. Eccrine glands produce sweat full of water and electrolytes that doesn’t smell too bad. Apocrine glands, however, are found in the groin, hands, feet and underarms and can cause a real stink due to the proteins and bacteria found in the sweat. If you eat garlic, broccoli, red meat or onions, you might stink even worse.

5. We wipe fluids on our clothes – snot, spit, whatever.

Why does it happen? It happens because we don’t know where else to put it.

6. We puke. Well, maybe you do; I don’t. However, if you have ever been to a race (especially the finish line), you know it’s not all that uncommon.

Why does it happen? It’s called exercise-induced nausea. It can come from overexertion or from stopping activity too quickly. Lack of hydration or over-hydration may also result in vomiting.

7. We pee ourselves. Although I have not experienced this phenomenon, it is very common, especially among women. A favorite trick is to dump water on your head to disguise the pee, much like when your water breaks in the grocery store – you can just drop a jar of pickles on the floor to disguise it. Whatever you do, it helps if you are wearing dark clothing.

Why does it happen? Well, if you’ve given birth, your pelvic and sphincter muscles might have become stretched out and weak. Or, maybe you are old. Sometimes these same muscles can weaken with age. If you are overweight, extra body weight can put additional pressure on the bladder, causing leaks. Lastly, if you are fatigued, muscles around the bladder can weaken when you run.

8. We poop, or really, really want to. Although not everyone gets the runner’s trots, it is common. Believe me, your day will likely come.

Why does it happen? When we run, the blood goes to our muscles and neglects our digestive system. Also, the internal organs get all jostled while running. This motion leads to cramps, turtling and severe panic about crapping one’s pants.

Have you ever experienced any of these raunchy things? Do you have any to add to the list?

For more from Beth Risdon, visit Shut Up and Run!

Related Articles
Do You Kill Your Own Race Buzz?
Gift Guide For The Persnickety Runner
Why You Should Consider Racing Locally in 2016
Beer Mile Champ Shares Tips For Drinking On The Run
What Should You Do The Week After A Marathon?